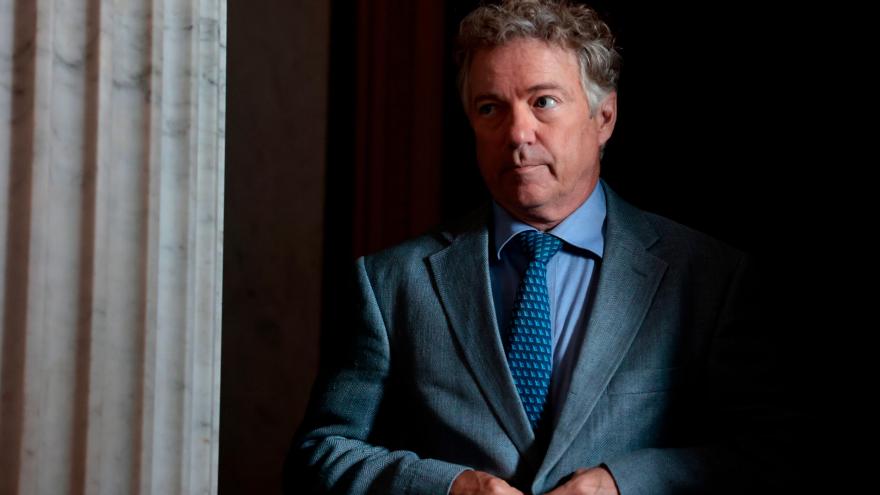 (CNN) -- In a rare showing of public unity, Senate Majority Leader Chuck Schumer and Republican Leader Mitch McConnell took to the Senate floor to press for quick passage of a $40 billion aid bill for Ukraine but were blocked by GOP Sen. Rand Paul of Kentucky who is demanding changes to the legislation.

Despite the high-profile pressure from the two leaders, Paul refused to blink, meaning that Schumer will need to take procedural steps to overcome his objection, which could take several days, but will ultimately lead to passage of the supplemental spending bill sometime next week.

McConnell and Schumer on Thursday offered to allow a vote on Paul's amendment, but he insisted it be added to the underlying bill.

The change Paul is seeking would create a special inspector general to oversee how the Ukraine military aid is spent. Members from both parties broadly agree with that notion, but forcing a change to the bill at this stage would be very time consuming and would slow getting the needed aid to Ukraine.

"The package is ready to go," Schumer said. "The vast majority of senators on both sides of the aisle want it. There's now only one thing holding us back the junior senator from Kentucky is preventing swift passage of Ukraine aid because he wants to add at the last minute his own changes directly into the bill. His change is strongly opposed by many members of both parties."

"We should vote on Senator Paul's amendment, and then we should pass the supplemental and we should do it today," McConnell added.

"My oath of office is the US constitution not to any foreign nation and no matter how sympathetic the cause, my oath of office is to the national security of the United States of America," Paul said in his remarks before objecting to moving to swift passage of the bill. "We cannot save Ukraine by dooming the US economy."

Schumer responded that "it's clear from the junior senator from Kentucky's remarks he doesn't want to aid Ukraine."

"That is not the case for the overwhelming majority here," Schumer said. "Again all he will accomplish with his actions here today is to delay that aid. Not to stop it."

Also Thursday, Paul blocked passage of a bill designed to protect federal judges and their families from potential threats by keeping their personal information -- such as home addresses, vehicle information and other personally identifiable material -- from data bases and other public records.

The bill was created after the assault on the home of a New Jersey federal judge, Esther Salas, whose son Daniel was shot and killed by an angry lawyer who had appeared before her in court.

Paul said he did not oppose the legislation, but wanted it to be expanded to include members of Congress and therefore blocked the bill from being passed by unanimous consent.

New Jersey Democratic Sen. Bob Menendez, who went to the floor to seek the bill's passage, said he would work with Paul to pass a separate bill dealing with concerns about the safety of lawmakers but said adding Paul's language would delay passage of the underlying bill and therefore refused to accept his changes.

The action on the floor came as debate swirls over the safety of Supreme Court justices who are facing protests at their homes by abortion rights activists and others.