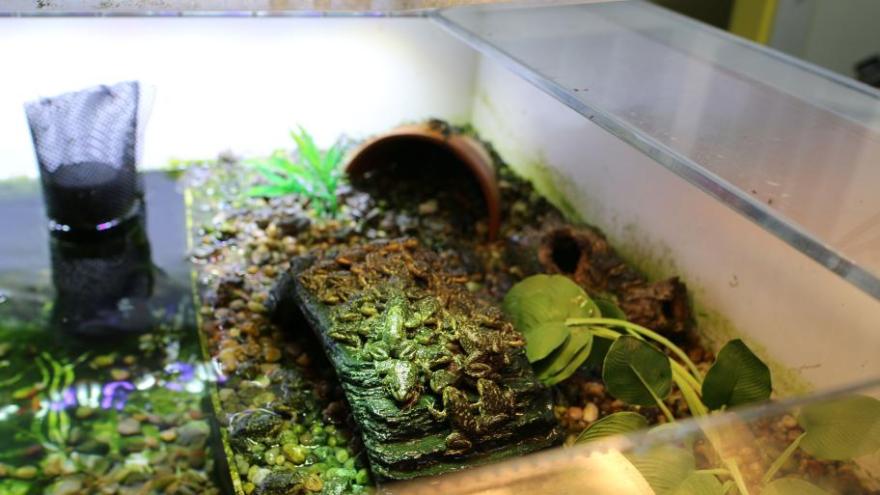 (CNN) -- Over two years after they were removed from California's San Gabriel Mountains due to the Bobcat Fire, endangered mountain yellow-legged frogs have been released into their native habitat.

The Aquarium of the Pacific acquired a total of 275 mountain yellow-legged frog tadpoles last July, according to Erin Lundy, who helps care for the frogs at the aquarium.

The aquarium received two tadpole cohorts: one cohort of tadpoles bred at the Los Angeles Zoo and half that were rescued during the fire that devastated their natural habitat.

"Over the course of the last year, we have been slowly and steadily raising them to be frogs," Lundy told CNN. The species can take up to four to five years to mature from the nascent tadpole stage to the adult frog stage, Lundy added. But they wanted to wait until the tadpoles matured before they released them -- the adults are "hardier" than the tadpoles, she said.

On September 15, a group of 188 frogs that had fully matured were released back into the San Gabriel Mountains, according to Lundy. Half were from the rescued cohort and half from the captive-bred cohort. The release is especially exciting given just how endangered the frogs are: there are less than 200 adults remaining in the wild.

"Being able to release over 180 frogs was really meaningful for us," Lundy said.

Amphibians like frogs play a key role in the ecosystem, according to Lundy. "When you remove amphibians from a habitat, you're actually losing all of these really interconnected parts of that food web, that can be pretty detrimental to how the ecosystem functions," she explained.

Mountain yellow-legged frogs tend to prey on insects including beetles, ants, and flies. And they have a unique survival tactic: They can emit a strong garlic-like scent as a defense mechanism when they feel threatened, said Lundy.

The species used to be quite populous in the US, Lundy said. But when humans introduced invasive predators like trout, which feed on tadpoles, their numbers plummeted.

"Mountain yellow legged frogs didn't have too many natural predators, which is why they were so populous and why they could take their time growing," she went on. "And they lived in very high altitudes, and streams and waterways that didn't typically have fish."

But the introduction of fish species for recreational fishing "decimated a lot of their population, in addition to infectious disease and other things that have been introduced to these animals over time."