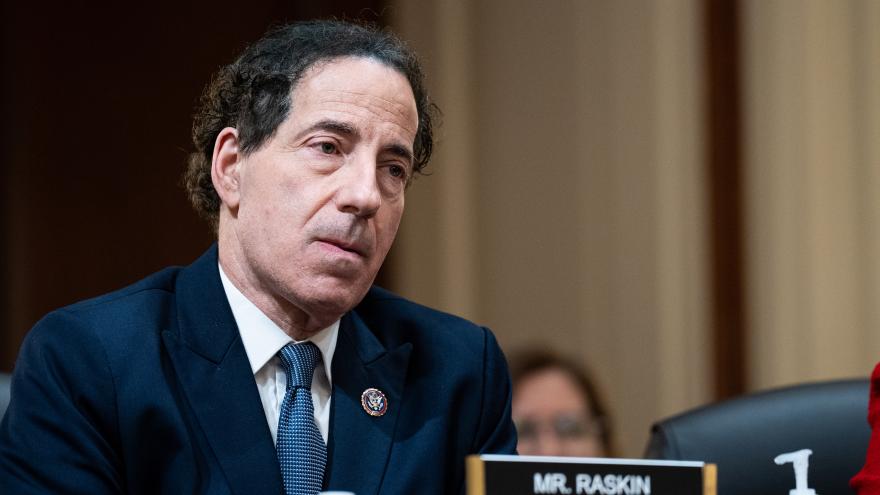 (CNN) -- Rep. Jamie Raskin, a Democrat who is on the House select committee investigating the attack on the US Capitol on January 6, 2021, said Sunday he believes Attorney General Merrick Garland knows "what's at stake here" when it comes to a possible indictment of former President Donald Trump from the Department of Justice.

"One of the conventions that was crushed during the Trump administration was respect by politicians for the independence of the law enforcement function," the Maryland Democrat told CNN's Dana Bash on "State of the Union." "Attorney General Garland is my constituent, and I don't browbeat my constituents. I think that he knows, his staff knows, US attorneys know, what's at stake here. They know the importance of it, but I think they are rightfully paying close attention to precedent in history as well as the facts of this case."

Raskin's comments came after the committee's first public hearing on Thursday -- the first in a series this month that will highlight the findings of the panel's investigation, which included interviews with more than 1,000 people about how Trump and his team tried to overturn the results of the 2020 election on multiple fronts.

Raskin, who is a lawyer, earlier during the interview drew a distinction between congressional authority to indict people for contempt of Congress -- pointing to the committee's indictments of members of Trump's circle including Peter Navarro, Mark Meadows and Steve Bannon who failed to comply with subpoenas -- versus a referral of crimes by the former president.

"There's not a specific statutory provision for just referring crimes to the Department of Justice. I suppose our entire investigation is a referral of crimes both to the Department of Justice and to the American people, because this is a massive assault on the machinery of America democracy when you have a sitting president who tries to overthrow the majority in the Electoral College of his opponent who beat him," he said.

Rep. Adam Schiff, another Democratic member of the select committee, went a step further Sunday, saying he believes the DOJ should investigate potential criminal activity from Trump as it relates to January 6.

"I would like to see the Justice Department investigate any credible allegation of criminal activity on the part of Donald Trump or anyone else," he said on ABC's "This Week."

"The rule of law needs to apply equally to everyone. And there are certain actions, parts of these different lines of effort to overturn the election, that I don't see evidence the Justice Department is investigating."

He added: "Once the evidence is accumulated by the Justice Department, it needs to make a decision about whether it can prove to a jury beyond a reasonable doubt the President's guilt or anyone else's, but they need to be investigated if there's credible evidence, which I think there is."

Top Democratic leaders in Washington and across the country fear that Trump might be running for president again by the time Garland decides whether to prosecute him and others in his orbit for the January 6 insurrection, CNN reported last week.

Two dozen leading Democrats in Washington and across the country tell CNN that Garland may have missed his moment to bring criminal charges against top Trump administration officials before it would get caught up in the 2024 presidential campaign jockeying set to begin later this year, after the midterm elections.

Garland has vowed to keep politics out of decision-making at the Justice Department, though he says he is not avoiding political cases. And Justice officials say they still have plenty of time in President Joe Biden's administration should they decide to bring prosecutions for any crimes connected to the effort to overturn the election results.

"It is multiple members of Congress, as the Vice Chair (Liz Cheney) said at our opening hearing, and all in due course, the details will surface," he said.

Perry has denied that he sought a pardon from Trump.

"The notion that I ever sought a Presidential pardon for myself or other Members of Congress is an absolute, shameless, and soulless lie," he tweeted.

Schiff also said the committee plans to show evidence that Republican lawmakers were seeking pardons in the wake of the insurrection.

Raskin also said one of the goals of the hearings is to prove to "any reasonable, open-minded person" that Trump knew he'd lost the election and wanted to overturn the results anyway.