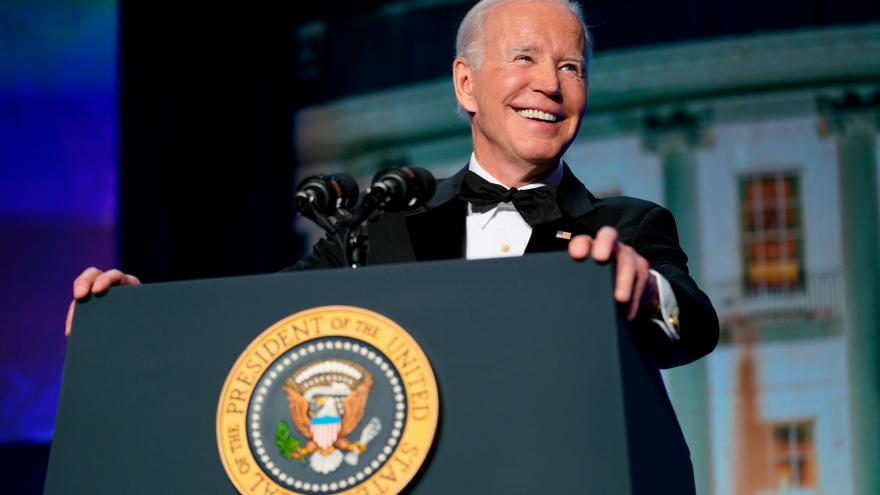 (CNN) -- President Joe Biden spoke Saturday at the White House Correspondent's Dinner, marking his first appearance at the widely attended Washington event since taking office and the first time a US president has attended the dinner in six years.

Read his remarks as released by the White House, lightly edited for style:

I'm really excited to be here tonight with the only group of Americans with a lower approval rating than I have. That's hard to say after what we just saw.

This is the first time a president attended this dinner in six years. It's understandable. We had a horrible plague followed by two years of Covid.

Just imagine if my predecessor came to this dinner this year. Now, that would really have been a real coup if that occurred. A little tough, huh?

But I'm honored to be here at such an event with so much history.

As already referenced, the very first president to attend the White House Correspondents' Dinner was Calvin Coolidge in 1924. I had just been elected to the United States Senate. And I reme -- I remember telling him, "Cal, just be yourself. Get up there and speak from the heart. You're going to be great, kid. You're going to do it well."

Of course, Jill is with me tonight. Jilly, how are you, kid? I think -- I think she's doing an incredible job as first lady. The first lady to continue working full-time, and she does as a professor.

She doesn't pay much attention to the polls, though she did say the other day: Instead of introducing myself as Jill Biden's husband, maybe I should introduce myself as her roommate.

I've attended this dinner many times, but this is my first time as president. And the organizers had -- had it hard -- made it pretty hard for me tonight. Although the good news is, if all goes well, I have a real shot at replacing James Corden.

It was great having him over at the White House the other day, just as he announced he's leaving the show. A great performer is going out on top after eight years in the job. Sounds just about right to me.

And it's tough to follow pros like James and Billy Eichner. Billy, where are you again? Do you -- where is he?

I've never had to open before Trevor Noah. Trevor is great. When I was elected, he did a show and he called me "America's new dad." Let me tell you something, pal: I'm flattered anybody would call me a "new" anything. You're my guy.

And, folks, it's been a tough few years for the country. That's one reason why it's great to be here again.

Everyone at the White House is so excited. I told my grandkids and Pete Buttigieg they could stay up late and watch this show tonight.

Tonight -- tonight we come here and answer a very important question on everybody's mind: Why in the hell are we still doing this?

I know there are -- I know there are questions about whether we should gather here tonight because of Covid. Well, we're here to show the country that we're getting through this pandemic. Plus, everyone had to prove they were fully vaccinated and boosted.

So, if you're at home watching this and you're wondering how to do that, just contact your favorite Fox News reporter. They're all here, vaccinated and boosted -- all of them.

And, look, Fox -- Fox News, I'm -- I'm really sorry your preferred candidate lost the last election. To make it up to you, I'm happy to give my chief of staff to you all so he can tell Sean Hannity what to say every day.

In fact, Ron Klain is here at the CBS table, which hired Mick Mulvaney. Mick, on CBS? I was stunned. I figured he'd end up on "The Masked Singer" with Rudy.

Look, I know this is a tough town. I came to office with an ambitious agenda, and I expected it to face stiff opposition in the Senate. I just hoped it would be from Republicans.

And, folks, I'm not really here to roast the GOP. That's not my style. Besides, there's nothing I can say about the GOP that Kevin McCarthy hasn't already put on tape.

Ronald Reagan said, "Mr. Gorbachev, tear this wall down." Today's Republicans say, "Tear down Mickey Mouse's house." And pretty soon, they'll be storming Cinderella's castle, you can be sure of it.

But Republicans seem to support one fella -- some guy named Brandon. He's having a really good year, and I'm kind of happy for him.

Let me conclude with a serious word.

We live in serious times. We're coming through a devastating pandemic, and we have to stay vigilant. I know Kamala wanted to be here, for example, and thankfully she's doing well. You should all know she sends her best.

We're in a time when what we so long have taken for granted is facing the gravest of threats. And I'm being deadly earnest.

Oversear- [sic] -- overseas, the liberal world order that laid the foundation for global peace, stability and prosperity since World War II is genuinely, seriously under assault.

And at home, a poison is running through our democracy of all -- all of this taking place with disinformation massively on the rise, where the truth is buried by lies and the lies live on as truth.

What's clear -- and I mean this from the bottom of my heart -- that you, the free press, matter more than you ever did in the last century. No, I really mean it.

I've always believed that good journalism holds up a mirror to ourselves, to reflect on the good, the bad and the true. Tonight, I want to congratulate the awardees and the scholarship winners who carry on that sacred tradition.

We've all seen the courage of the Ukrainian people because of the courage of American reporters in this room and your colleagues across the world, who are on the ground, taking their lives in their own hands.

And although it's not in Ukraine, it's Russia -- Mom, I'd like to meet you and Dad to talk about your son.

We just -- we just saw a heartbreaking video: Nine have been killed reporting from Kyiv -- struck by a kamikaze drone strike after a shopping mall attack; shot in the neck while decounci- [sic] -- while -- while documenting Ukrainians fleeing; killed when Russian missiles hit the television tower in a residential neighborhood. One journalist from Radio Liberty just killed days ago.

So many of you telling the stories and taking the photos and recording the videos of what's happening there, the unvarnished truth shown -- showing the -- the destruction and the devastation and, yes, the war crimes.

Tonight, we also honor the legacy of two historic reporters, and that is Alice Dunnigan and Ethel Payne. I'm glad you saw that tonight. I didn't know you were doing that. These are the first Black women to be White House reporters, who shattered convention to cover a segregated nation.

We honor members of the press, both national and local, covering a once-in-a-century pandemic where we lost a million Americans, a generation reckoning on race and the existential threat of climate change.

The free press is not the enemy of the people -- far from it. At your best, you're guardians of the truth.

President Kennedy once said, and I quote, "Without debate, without criticism, no administration, no country can succeed, and no republic can survive."

The First Amendment grants a free press extraordinary protection, but with it comes, as many of you know, a very heavy obligation: to seek the truth as best you can -- not to inflame or entertain, but to illuminate and educate.

I know it's tough. And I'm not being solicitous. The industry is changing significantly.

There's incredible pressure on you all to deliver heat instead of shed light, because the technology is changing so much, the system is changing. But it matters. No kidding. It matters. The truth matters.

As you've heard me say many times: There's not a damn thing this country can't do when we stand united and do it together. And I know we can do anything we want to do that's right.

I've been around a long time, as has been pointed out many times tonight. But I give you my word as a Biden: I've never been more optimistic about America than I am today. I really mean it.

At times of enormous change, it presents enormous opportunities. For despite all the crises, all the partisanship, all the shouting and the showmanship,

I really know this and you know it too: We are a great nation because we're basically a good people.

And here in America, good journalism, good satire about our leaders, about our society is quintessentially an American thing. It demonstrates the power of our example.

And I, honest to God, believe it reveals our soul -- the soul of our nation. And that's what I'd like to toast tonight, if I may.

(The President offers a toast.)

To the journalists and their families, to the people and their elected representatives, to the United States of America.

And by the way, Madeleine Albright was right: We are the indispensable nation.

Ladies and gentlemen, I'm going to turn this over to Trevor now, strap myself into my seat.

And, Trevor, the really good news is: Now you get to roast the President of the United States and, unlike in Moscow, you won't go to jail.

The podium is yours.