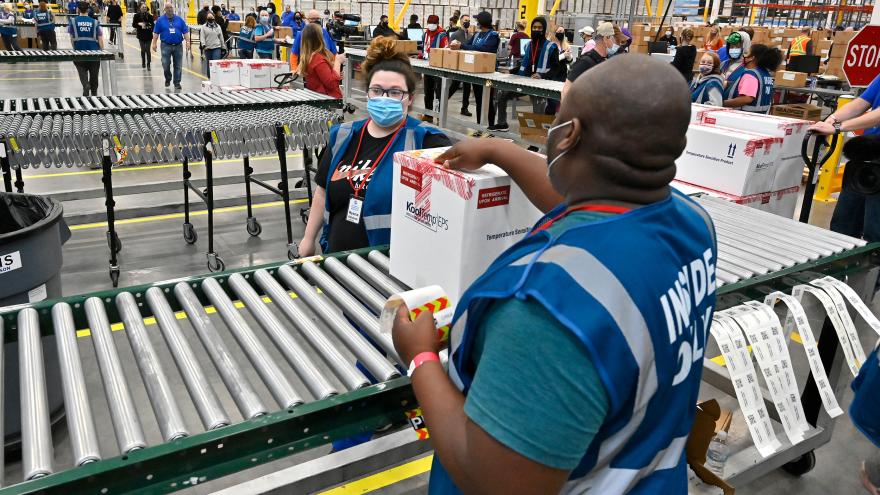 (CNN) -- The US public and even some health experts may have underestimated the Covid-19 vaccine made by Janssen, a division of Johnson & Johnson, new data shows. And there's emerging evidence that it could still play an important role ahead.

A study published Thursday in the medical journal JAMA Network Open found that the J&J vaccine remains durable and effective, even through the surge of cases caused by the Delta variant. It was 76% effective overall in preventing Covid-19 infections and 81% effective in preventing Covid-related hospitalizations. The study also showed that it provided lasting immunity at least six months after the shots.

And a CNN analysis of information collected by the US Centers for Disease Control and Prevention showed the J&J vaccine had the lowest breakthrough infection rate of all the vaccines sincethe week ending December 25, the latest five weeks of available data.

"What we saw in the summertime and the fall during the Delta surge is that all three vaccines protected very, very well. But breakthrough rates in August, September of last year with the Janssen vaccine were slightly higher than Pfizer, and Moderna was slightly lower.But those differences were relatively small," said Dr. Dan Barouch, director of the Center for Virology and Vaccine Research at Beth Israel Deaconess Medical Center in Boston. He helped to develop and study the J&J vaccine.

"But what we saw over time is that those differences then narrowed," he said. "And by the first week of December, what we saw in the data is that the lines cross," with incidence rates for the J&J/Janssen vaccine becoming lower than the others.

In March 2021, the J&J vaccine was the third to be authorized by the US Food and Drug Administration, and the initial response was more muted than the milestone authorizations of the mRNA vaccines from Pfizer/BioNTech and Moderna.

The vaccines work differently. The mRNA vaccines deliver blueprints, essentially, that train your body trains to fight that particular infection and any similar infection down the road. Adenovirus-vector vaccines, like J&J's, use a virus that can act like a Trojan horse. But instead of soldiers jumping out, the adenovirus releases genes that encode the coronavirus' spike protein.

The J&J vaccine stood out for other reasons, too: It came as a convenient single dose and didn't require special refrigeration, whereas the mRNA vaccines required two doses, and Pfizer's needed special cold storage. The flexibility was appealing for people who were afraid of shots or didn't have the time to get two shots. It was also better for countries without a solid health care infrastructure.

But its performance tempered some of the enthusiasm around it, especially from the public.

Whereas the mRNA vaccines were hailed for "astonishing" efficacy of more than 90%, the news that J&J was 65% effective at preventing symptomatic Covid-19 among clinical trial volunteers underwhelmed some.

From the start, the J&J vaccine supply was more limited. After after the vaccine was authorized, the federal government briefly paused its use due to safety concerns around rare blood clotting events. Even once vaccinations resumed, the pace of J&J vaccinations never recovered.

In December, the CDC changed its recommendations to say shots made by Moderna and Pfizer/BioNTech are preferred over J&J's. It also urges people who got the J&J shot to get a booster of one of the mRNA vaccines two months later.

The protection that the Covid-19 vaccines offered has waned over time, and none of them works as well against the variants that have popped up since the original coronavirus surfaced. But the science is starting to show that people who got the J&J Covid-19 vaccine may have some advantage.

Barouch told CNN that he "wasn't surprised at all" to see that the durability of the Johnson & Johnson vaccine appears to be last longer than that of the mRNA vaccines -- Pfizer/BioNTech and Moderna -- based on the incidence of breakthrough infections.

The mRNA vaccine technology has been shown to quickly elicit a potent and robust immune response after vaccination, but that can wane over time. Johnson & Johnson's virus-vector platform may not spark as powerful of an immune response in the short term, but it is known to have strong durability.

The J&J vaccine also might have "a particular edge," he said.

"The immune system is actually made of two arms: the antibodies side and the T cells. And the type of T cells that are critical for prevention of serious illness are called CD8 T cells," Barouch said. "The J&J vaccine raises better CD8 T cells than the Pfizer and other mRNA vaccines, so the J&J vaccine might have a particular edge for variants like Omicron that largely escaped from antibody responses."

Overall, Barouch called this data "very reassuring" for recipients of the J&J vaccine.

"They should be reassured that they received a vaccine that gives very good protection for a long period of time," Barouch said. "And I think the second message is that I think people should learn about these new data in terms of considering booster shots, as well."

Prospects as a booster?

David Montefiori, a virologist at Duke University Medical Center, said "the J&J vaccine has kind of gotten a bad rap because of the efficacy, but the stability of the response is intriguing."

The antibody level went down with every vaccine during the Omicron surge, and that could mean people need an additional booster. More research is needed to find out.

A yet-unpublished study by the National Institutes of Health looking at a mix-and-match vaccine strategy saw good results when J&J was included, Montefiori said.

The J&J vaccine has been linked to rare cases of blood clots with low platelets, known as thrombosis with thrombocytopenia syndrome or TTS. "It occurs at a rate of about 3.83 cases per million Janssen doses and has resulted in deaths," the CDC says.

Dr. Angela Branche, an infectious disease specialist and associate professor of medicine at the University of Rochester, said the side effect profile of the J&J vaccine "remains something that's of concern for some groups where that risk is high." Women ages 30 to 49 years are at increased risk of this rare adverse event, the CDC says.

But if that research pans out, the J&J vaccine may be useful as a booster for only certain populations.

"For some groups where that risk of developing serious blood clots is not very high, like older adults, this may be a good strategy," Branche said.

"I think there might still be a place for the J&J vaccine in the long-term picture of this pandemic," Montefiori said.