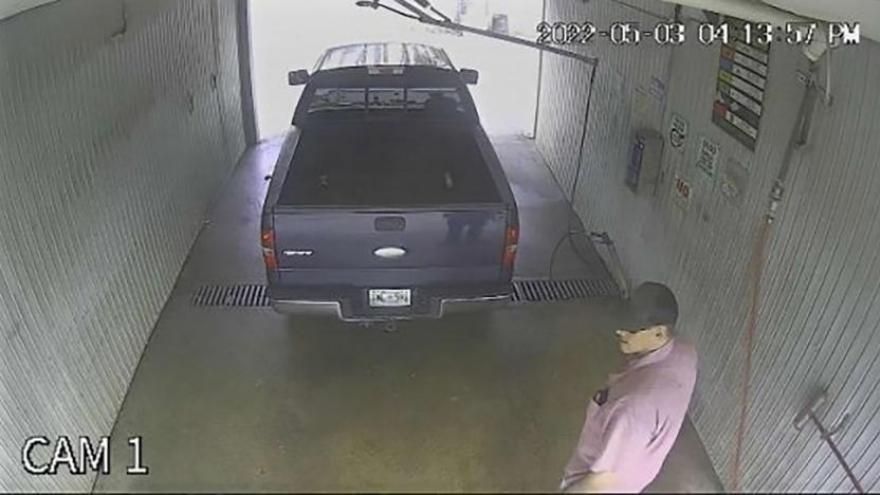 U.S. Marshals released photos of who they believe was fugitive Casey White caught on surveillance at an Evansville Indiana car wash.

(CNN) -- Recaptured inmate Casey White was transferred to an Alabama state prison early Wednesday, more than a day after his arrest in Indiana that ended 11 days on the run with an Alabama county jail official who authorities say helped him escape.

Vicky White, the woman accused of freeing him in late April, died Monday after a shooting that authorities believe was self-inflicted. That gunfire happened at the end of a car chase and wreck, authorities say, that led to Casey White's capture.

Casey White was escorted Tuesday from Indiana back to Alabama, where he attended a late-night court arraignment in Lauderdale County -- the county from which authorities say he escaped.

At the arraignment, Judge Ben Graves told White he will be charged with escape in the first degree, in addition to capital murder charges he was already facing related to the 2015 stabbing death of Alabama resident Connie Ridgeway.

During the hearing, White, in handcuffs and with shackles around his ankles, listened intently with his eyes locked on Graves as the judge explained the charges. White appeared tired and sniffled more than once throughout the 10-minute hearing.

On the back of White's head were four small gashes within a shaved circumference of hair the size of a quarter. Dry blood was visible on the back of his bright yellow jumpsuit.

Immediately after the hearing, White exited the courthouse and glanced at the news cameras and the crowd of bystanders who had gathered, but didn't say anything. He was transferred to a state prison -- William E. Donaldson Correctional Facility in Bessemer, Alabama, a little more 100 miles south of Lauderdale County.

Casey White, 38, and Vicky White, 56, were captured in Evansville, Indiana, Monday after a chase that ended when authorities forced the car Casey White was driving to wreck in a ditch, the US Marshals Service has said.

Plenty of questions remain about the actions of both Casey White and Vicky White, the then-Lauderdale County assistant director of corrections who authorities say drove the inmate out of the county detention center in a patrol car April 29 under the pretense of taking him to a courthouse.

The pair used a series of other vehicles over the next week and a half, at least one of which was purchased on the run in Tennessee, and likely were aided by cash from the recent sale of Vicky White's home, authorities have said.

The two were not related but may have built a clandestine, romantic relationship while Casey White -- normally housed in state prison after being convicted of a string of crimes in 2015 -- intermittently stayed at Lauderdale County's detention center while attending pretrial hearings relating to Ridgeway's death, authorities have said. Vicky White was set to retire on the day authorities say she freed the inmate.

Monday's car chase and crash in Evansville ended a frantic 11-day manhunt that spanned multiple states and elicited hundreds of tips, including one that ultimately led authorities to their capture.

911 call: Woman mentioned getting out and running

Authorities zeroed in on the pair in Evansville after US marshals learned Sunday that a truck -- which investigators say the two used -- was abandoned at an Evansville car wash. Surveillance footage there showed Casey White with the truck, and investigators learned that the pair left the car wash in a Cadillac, authorities said.

An Evansville police officer noticed the Cadillac in the motel's parking lot on Monday. Officers then watched the motel, and gave pursuit when they saw the pair drive away, authorities said.

Pursuing officers rammed the Cadillac into a ditch, and the vehicle rolled over. Authorities preliminarily believe that Vicky White shot herself "once the vehicle crashed," said Dave Wedding, sheriff of Indiana's Vanderburgh County. She died at a hospital later Monday.

The city of Evansville on Wednesday released what it said was a 911 call that Vicky White made during the chase. In that call, no one appears to address the dispatcher, who says "911" and "hello" seemingly without being answered.

Instead, a woman's voice -- apparently Vicky White's -- is heard saying things including, "wait, stop ... airbags going to go off and kill us."

Soon, a loud noise is heard -- the first of at least four loud noises to happen in about 15 seconds. It's unclear in each instance what the noises represent, and it's unclear from the audio when the car was rammed, when it rolled over, and when a gun was fired.

"God," the woman says after the first noise. "Airbags are going off. Let's get out and run." She mentions a hotel.

The second noise is heard, and the woman shrieks. At least two more noises come, followed by another shriek.

Starting just more than a minute later, someone says repeatedly "got a gun in her hand," and "she is breathing."

The line stays open as officers try to get the pair out of the vehicle.

On Tuesday, Wedding told CNN that Vicky White had indicated in a call with police dispatchers that she had a gun. Also, in dispatch audio from Evansville police, a dispatcher transmitted that "we could hear her on the line saying she had her finger on the trigger."

The 911 recording released Wednesday does not appear to reveal Vicky White mentioning a gun or her finger on a trigger. However, other people in the recording -- apparently responding officers -- can be heard saying her finger was on the trigger when they found her.

Officers were able to remove Casey White from the car, but Vicky White was pinned inside and had a gunshot wound to her head, US Marshal Marty Keely told CNN Monday.

Casey White reportedly told authorities to help "his wife" who had shot herself in the head and he told them he didn't do it, Keely said Monday. Keely noted that Casey White and Vicky White were not, to investigators' knowledge, married.

Though investigators believe Vicky White shot herself, a coroner will confirm whether they are correct, Wedding said.

In the video, several officers surround Casey White, who is pinned to the ground next to the car. The fugitive is then taken into custody and led away from the wrecked car.

Authorities were not immediately able to pull Vicky White from the car because she appeared to have the gun in her hand, according to officers seen in the body camera video. After an officer reached in to take the gun, they worked to pull her through the car's sunroof opening, the video shows.

The officer and inmate were traveling with cash and weapons

Investigators found wigs, $29,000 in cash and several weapons in the Cadillac, including four handguns, an AR-15 rifle and three magazines, Wedding said.

Casey White intended to have a shootout with law enforcement, and would have done so if pursuing officers had not forced him to wreck, Wedding told reporters Tuesday, citing White's interviews with investigators after the capture.

Forcing the Cadillac into the ditch "may have saved many of my deputies' (and other officers') lives," Wedding said.

Inmate's arrest is a 'huge relief'

Prior to his escape, Casey White had been temporarily transferred from state prison to Lauderdale County's detention center in February to attend court hearings related to his pending murder trial in Ridgeway's death, authorities said.

Ridgeway's son Austin Williams sat in the first row of the courtroom during Tuesday night's court appearance, within 10 feet of White. Williams told CNN earlier Tuesday that White's capture was a "huge relief," and "it felt like a miracle."

White allegedly confessed to killing Ridgeway in 2020, but later pleaded not guilty by reason of insanity.

He was already being held in a state prison on a 75-year sentence for a series of other crimes in 2015, including home invasion, carjacking and a police chase, the Marshals Service said.

Authorities believe Casey White and Vicky White met at the county jail as early as 2020, when he was arraigned in the Ridgeway case, Lauderdale County Sheriff Rick Singleton said.

White's murder trial is currently set for June. During Tuesday's court appearance, White's attorney, Jamy Poss, said he would be filing a change of venue motion, which the judge said he would consider.

The journey to Indiana

Vicky White checked the inmate out of jail on April 29, saying she was taking him to the courthouse for a mental health evaluation, authorities said.

The pair instead drove to a nearby shopping center parking lot, ditched the officer's patrol vehicle and took off in a 2007 Ford Edge SUV that Vicky White had bought under an alias and parked in the lot the night before, Singleton said last week.

The SUV was found in a tow lot in Williamson County, Tennessee, about a two hours' drive north of the jail in Florence, Alabama, US Marshals have said. Singleton says the pair likely abandoned it just hours after they left Florence, possibly due to mechanical issues.

Authorities believe they purchased a Ford F-150 truck -- the vehicle eventually found at the Evansville car wash -- while in Tennessee.

They are believed to have been in Evansville since at least May 2, when a city police officer proactively checked the license plate of the truck, Evansville Police Chief Billy Bolin said Tuesday. At the time, the check did not flag any connection between the truck and the fugitives, he said.