Record diesel prices, tight supplies could be next blow to the US economy 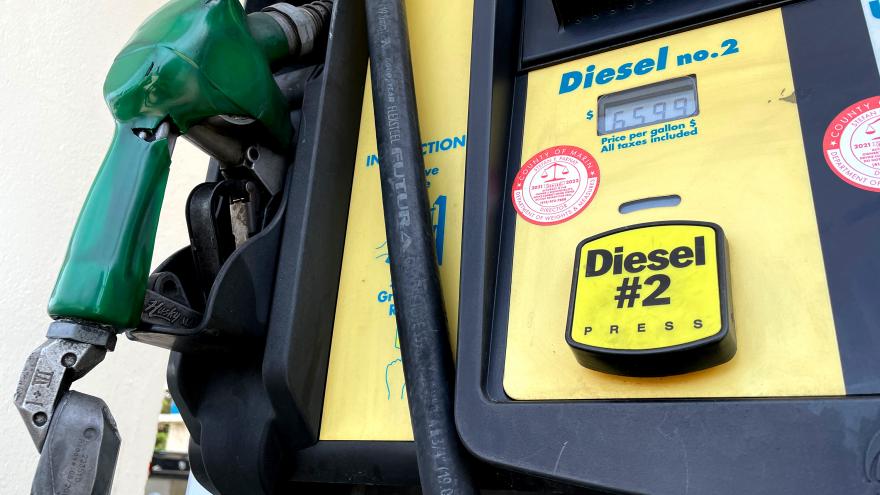 (CNN) -- Diesel prices are soaring to record levels, and record low inventories of the fuel in parts of the United States are sparking fears of worse to come.

Even if you've never bought a gallon of diesel in your life, as is the case for most US drivers, high diesel prices can hit your wallet— and the US economy — in multiple ways.

"The first way high diesel prices impact the economy is it makes it expensive to ship," said Tom Kloza, global head of energy analysis for the OPIS, which collects gas price data for AAA. "The second way is possible disruptions in the supply chain. None of it is good."

Leading energy economist Phil Verleger worries that the tight supply could send the average US price of diesel to $10 a gallon by the end of the summer, up from its current record average price of $5.56, according to AAA. Diesel prices that high could put the brakes on the US economy, he said.

"Until the invasion of Ukraine, we've never seen anything like this," Verleger said. "The market is totally distorted. And we're likely to see much slower economic activity as a result."

Virtually everything you buy is at some point shipped on a truck that runs on diesel. Trucking companies charge their customers a fuel surcharge when prices rise, raising the cost on whatever they're delivering. Entire supply chains can be crippled if trucks don't have the fuel they need to run.

It's also critical for use in agriculture. Higher dieselprices could force farmers to scale back plantings or fertilizing, limitingalready tight food supplies and drivingup food prices beyond the added cost of transportation.

"A lot of truckers just won't be able to operate," said Verleger. "If you're a farmer, you may have to leave some acres fallow, or won't fertilize as much. The macroeconomists don't get this. It's going to come back and haunt us all."

The current national average for a gallon of diesel jumped more than 10% in the last month, and is 77% higher than a year ago. Prices in the Northeast are all well over $6 a gallon, and in a half-dozen states in New England as well as New York the prices have more than doubled over the last year.

By comparison, the national average price for regular gasoline, also at a record high, is $4.42 a gallon, up slightly less than 50% in the same period.

Why diesel supplies are low and prices sky high

The reasons for the shortages are varied, but the sanctions and reduced supply of Russian oil because of its invasion of Ukraine have played a major role.

Although very little Russian crude oil or diesel came to the US market before the war, Europe is dependent on it. About half the cars in Europe run on diesel, in addition to trucks and freight trains. (Less than 5% of US passenger cars run on diesel.)

The average price of diesel has soared to between $7.27 and $8.95 a gallon across Western European countries, and it isn't much cheaper in most of Eastern Europe.

Those high prices have prompted a huge surge in exports of diesel to Europe from US and Canadian refineries that would normally be supplying US truck stops and trucking companies. Exports of US diesel to Europe since the start of April are up 36% compared to the same period a year ago, according to the US Energy Information Administration.

Oil refineries are making as much diesel, and similarly expensive jet fuel, as possible with the oil they have, which is driving up the price of gasoline. But there is less US and Canadian refining capacity today than there was before the pandemic, as some refineries closed permanently, and others are being converted to refine renewable fuels rather than crude oil.

Diesel futures prices are more than $1 a gallon below the current spot price, which might provide hope that prices could trend lower in coming months. But that also has discouraged diesel retailers and trucking companies from buying too much on the spot market. And Verleger said the current price of diesel means some companies can't afford to buy as much supply as in the past due to limits on their credit lines.

All these factors mean that the supplies of diesel are very tight, particularly in the Northeast, wherethe EIA saidthe inventories are at a record low based on data that goes as far back as 1990. Supplies have dropped 36% since the week of February 25, when Russia invaded Ukraine, and are nearly 50% below where they stood a year ago.

Truck stop operators say they're scrambling to provide the diesel their customers need.

Brad Jenkins, senior vice president of supply and distribution for Pilot Company, which operates more than 750 locations in the US and Canada, said that although diesel inventories are adequate in much of the country,there are "extremely low" inventories in Eastern states. In addition, he said refinery issues are creating tightness in the St. Louis and Indianapolis markets, and that Virginia and Georgia are also experiencing "tight availability."

Love's Travel Stops, a chain of more than 500 truck stops across the country, said it has had "minimal outages" of diesel during low traffic hours at its East Coast locations and that it currently has "no plans to restrict purchases of diesel."

The diesel shortage so far is manifesting itself in the form of sky high prices, not widespread outages or limits on purchases, said Kloza. "But stay tuned," he cautioned.