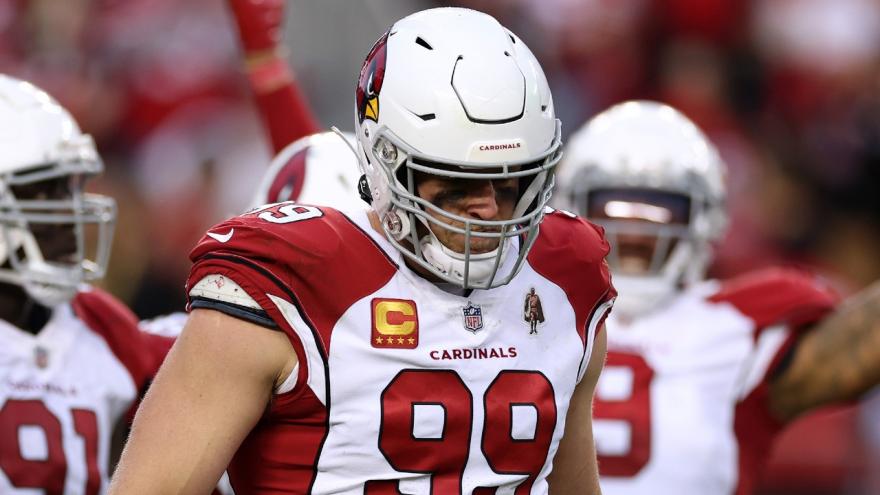 (CNN) -- JJ Watt was in a flood of tears after being shown an emotional tribute video of family and NFL stars like Tom Brady, Peyton Manning, Dak Prescott and Aaron Rodgers ahead of his final NFL game.

The three-time NFL Defensive Player of the Year played the final game of an illustrious career over the weekend in the Cardinals' 38-13 loss to the San Francisco 49ers. Ahead of the game, as part of HBO's "Hard Knocks" series, his coach Matt Burke surprised Watt and his teammates with the video.

Manning, Prescott and Rodgers all congratulated Watt on his career, but Brady had a slightly different take.

"Man, you were a pain in my ass for a long time," he chuckled before saying, "It was an honor to share the field with you."

Watt's family members were more emotional in their tributes. Younger brother TJ, who is a outside linebacker for the Pitsburgh Steelers said, "I just want to say congratulations on retirement.

"You and your resiliency throughout all of these ups and downs, you ending up in the NFL and you being a Defensive Player of the Year and you having all the success that you had showed me that it was possible."

The clip, widely shared on social media, continually cut to Watt who was unable to contain his emotions as he watched the messages roll in before it concluded with a round of applause from his teammates.

The Cardinals defensive end announced his retirement in December after he and his wife Kealia had given birth to their first child, Koa.

Watt had also revealed in a social media post that he underwent treatment for atrial fibrillation -- an irregular heartbeat described by many sufferers as a "quiver," "flutter" or "flip-flop" of the heart.

An emotional Kealia featured in the video saying, "It has been such an honor to watch you work your ass off these past years and do whatever you needed to do to be the best.

"You've always been so generous and kind and loving to everybody around you, and you never forgot who you are."

Watt certainly did not forget who he was in his final game, finishing with two sacks, five tackles and a pass deflection. It was the culmination of one of the strongest defensive careers in recent NFL history.

Watt ended his NFL career with 114.5 sacks, 586 tackles, 27 forced fumbles and 70 passes defended in 151 games played. He owns the Texans franchise record for the most career sacks with 101 and is the only player in NFL history to record two, separate 20-sack seasons.

He was a seven-time All Pro, five-time Pro Bowler and was the Walter Payton NFL Man of the Year in 2017.