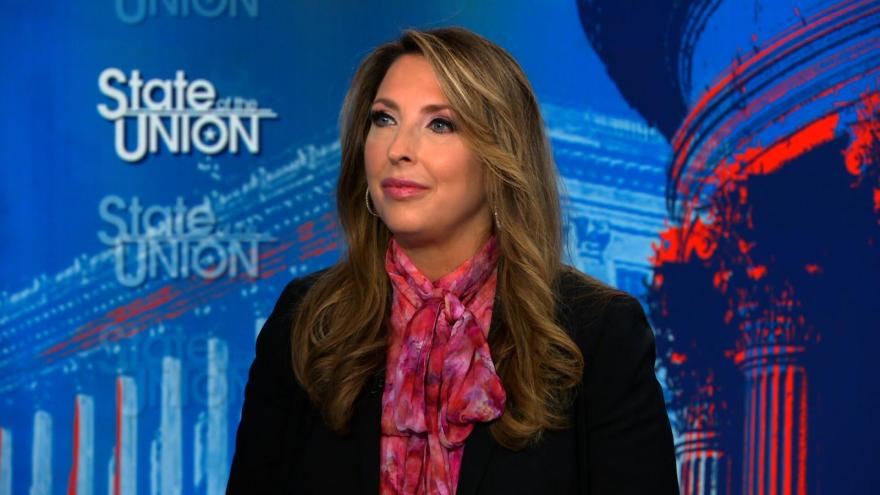 Republican National Committee Chairwoman Ronna McDaniel said Sunday that candidates from her party would accept the results of the midterm elections after letting "the process play out."

(CNN) -- Republican National Committee Chairwoman Ronna McDaniel said Sunday that candidates from her party would accept the results of the midterm elections after letting "the process play out."

Asked by Bash about Wisconsin Sen. Ron Johnson declining to commit to accepting the midterm results, McDaniel sought to compare his remarks to past comments by Democrats.

"Well, I would say the same to Stacey Abrams, right. Or Hillary Clinton, who's already saying, in 2024, we are going to rig the election. That's not helpful," she said, before later adding, "We'll let the process play out and then we'll accept the results."

The comments come two days before the critical midterm elections, in which Republicans are hoping to wrestle back control of the House and wipe away Democrats' razor-thin majority in the Senate. Already, some GOP candidates have been casting doubt about the legitimacy of the forthcoming results, similar to what then-President Donald Trump and his allies did in the run-up to the 2020 election.

Johnson, who is in a competitive reelection fight for a third term, would not commit last week to accepting the upcoming election results, telling reporters in Wisconsin, "Let's see how this plays out."

"I sure hope I can, but I can't predict what the Democrats might have planned," he said.

"I think Ron Johnson and Stacey Abrams in the end, once all their avenues are exhausted, they'll accept the results," McDaniel told Bash on Sunday, referring to Georgia's Democratic gubernatorial nominee, whose refusal to initially "concede" following her loss to Republican Brian Kemp in their 2018 contest has been seized on by Republicans looking to cast doubt on election legitimacy.

Abrams has argued that Kemp, who was then serving as the Georgia's secretary of state, and other state GOP leaders used the tools of the state to suppress the vote four years ago. But she acknowledged Kemp's certification as governor and that she no longer had legal avenues.

Clinton said last month in a video for a progressive group, "Right-wing extremists already have a plan to literally steal the next presidential election, and they're not making a secret of it."

She went on to add that the conservative majority on the US Supreme Court could give state legislatures more power in overturning elections.

McDaniel also defended the practice of poll watching when asked about instances of voter intimidation throughout the country, but added: "We absolutely want them to abide by the law, and if they don't, then they shouldn't be allowed to do that."

"Nobody should be intimidating or breaking the law, nobody should. But poll watching is not intimidating," she said. "If you've been at a poll place, you see, they're just simply observing and it helps us, at the end, give assurance to the voters (and) say, 'listen, we were there, we watched it, it went well.'"

McDaniel also predicted that Republicans would take back both chambers of Congress in the midterm elections and stressed that if they do, President Joe Biden will have a mandate from Americans to work with Republicans.

"If we win back the House and the Senate, it's the American people saying to Joe Biden, 'we want you to work on behalf of us and we want you to work across the aisle and solve the problems that we are dealing with.' Bill Clinton did that, right? After '94, when he lost those midterms, he came across and said, 'Let's work together.' It would be interesting to see if President Biden does that," she said.

And McDaniel avoided weighing in on Trump's plans to possibly announce a 2024 White House bid later this month, saying simply: "I'm only focused on 2022."

CNN reported last week that top aides to Trump have discussed the third week of November as an ideal launch point for his 2024 campaign if Republicans fare well in this week's elections, according to sources familiar with the matter.