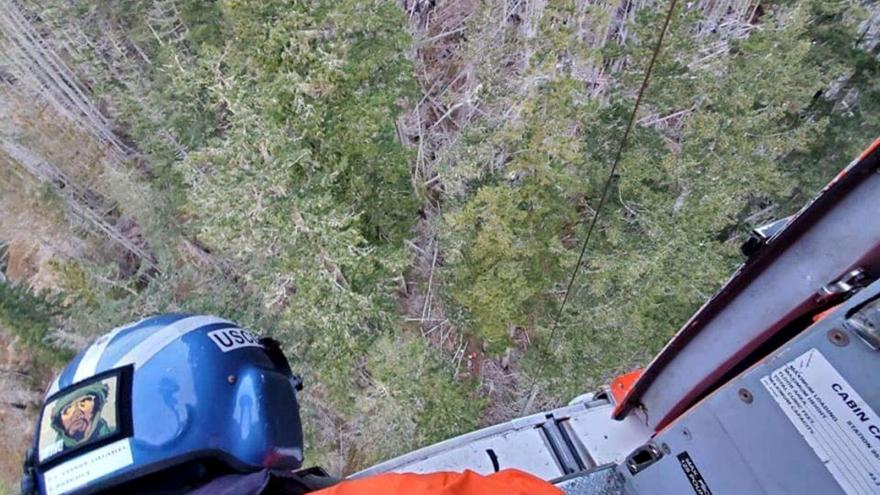 A US Coast Guard helicopter hovers as it lowers a rescue basket to hoist the runner out of the park.

(CNN) -- A runner crawled for nearly eight hours to find help after injuring his leg in a national park in Washington, authorities said.

"Carrying a charged cell phone and displaying incredible grit and determination to self-rescue likely prevented more serious injury in this case," Jefferson County Search and Rescue said in a statement posted on Facebook.

Around 5 p.m. Friday, the runner was injured on the Duckabush River Trail in the Olympic National Park, Washington, according to the release. He was about 10 miles from the trailhead and his cell phone did not have a signal so he couldn't call for help.

"I wasn't counting on my phone ever working I just figured this is my only chance I'm going to crawl all the way there," Joseph Oldendorf told CNN affiliate KIRO. Oldendorf said his tibia became detached, keeping him on his hands and knees. Crawling on the trail made his knees so raw, he said he put his shoes over them for a level of protection.

Temperatures were below freezing, and he was wearing only light running clothes as he crawled for several miles, the release said. At 12:45 a.m. on Saturday, he realized his phone had a signal because he received a text message.

He called 911 and kept crawling, the release said.

Oldendorf told the station that he tried lying down to wait, but he was too cold and believed that if he didn't keep moving he could die. Thoughts of his family kept him going, he said.

"I don't want my family to hear I died in the wilderness. I think it'd be unbearable," Oldendorf told the station.

A crew from the Brinnon Fire Department along with Jefferson Search and Rescue volunteers responded and started up the trail to find the injured runner. A Jefferson County Sheriff's deputy managed coordination and communication at the trailhead, the release said.

The runner was located by his voice five to six miles from the spot where he was injured, the release said. Fire department EMT's treated him for a leg injury and exposure to the cold.

The rescuers then moved the runner to a spot where be hoisted by a US Coast Guard helicopter and flown to Harborview Medical Center in Seattle. The trail is on the east side of the Olympic Peninsula, about 50 miles west of Seattle.

The incident renewed his respect for nature, Oldendorf told KIRO, and he hopes to one day return to the trails.