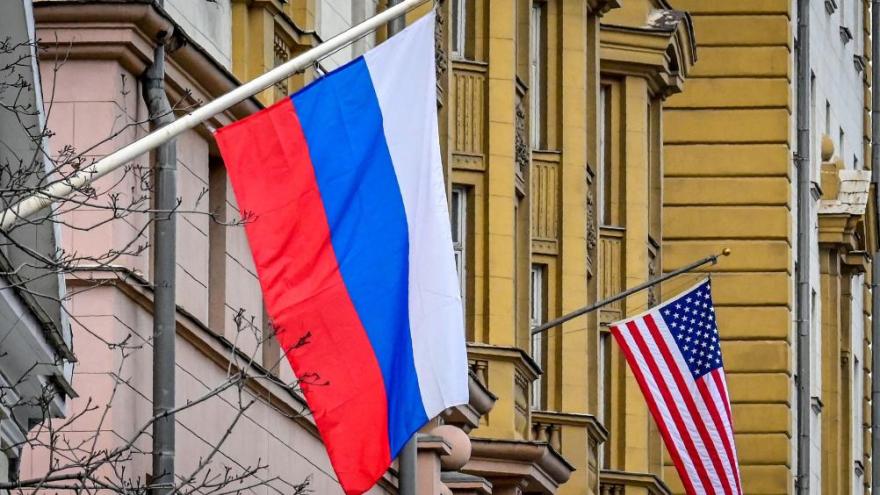 Russia postpones nuclear arms control talks with the United States. A Russian flag flies next to the US embassy building in Moscow on March 18, 2021.

(CNN) -- The Biden administration is blaming Russia for postponing meetings to discuss a key nuclear arms control agreement between the two countries that were scheduled to begin in Egypt on Tuesday, with a State Department spokesperson saying the decision was made "unilaterally" by Russia.

The meetings on the New START Treaty -- the only agreement left regulating the world's two largest nuclear arsenals -- were scheduled to be held in the wake of Moscow's nuclear saber-rattling toward Ukraine and following complications around inspections related to the treaty. US officials have repeatedly stressed the need for dialogue on nuclear matters in order to reduce risk.

In a statement Monday, the State Department spokesperson said that "the United States and the Russian Federation were set to convene a meeting of the New START Treaty's Bilateral Consultative Commission (BCC) in Cairo, Egypt, to discuss New START Treaty implementation on Tuesday, November 29."

"The Russian side informed the United States that Russia has unilaterally postponed the meeting and stated that it would propose new dates," the spokesperson said.

Russia did not provide a reason to the US for postponing the talks, a senior State Department official told CNN. Moscow informed the US of its decision in "recent days," the official said.

The Russian Foreign Ministry told Russian state media outlet RIA Novosti that the talks had been postponed, but did not give a reason for the delay.

"The session of the Bilateral Consultative Commission on the Russian-American START Treaty, previously scheduled in Cairo (November 29 - December 6), will not take place on the dates indicated. The event has been postponed to a later date," the ministry said.

A date for the rescheduled talks remains unclear. The State Department spokesperson said the US "is ready to reschedule at the earliest possible date as resuming inspections is a priority for sustaining the treaty as an instrument of stability."

The New START Treaty puts limits on the number of deployed intercontinental-range nuclear weapons that both the US and Russia can have. It was last extended in early 2021 for five years, meaning the two sides will soon need to begin negotiating on another arms control agreement.

Under the treaty, Washington and Moscow are permitted to conduct inspections of each other's weapons sites, but due to the Covid-19 pandemic, inspections have been halted since 2020.

"It's very unusual and very unfortunate that the Russians have, at the 11th hour, postponed this meeting which they had indicated they were interested in having," Daryl Kimball, the executive director of the US-based Arms Control Association, told CNN.

Kimball said the meeting is "essential for resolving the issues that have been holding up the resumption of on-site inspections under New START" and "an important step toward formal negotiations between the two countries on a new nuclear arms control agreement."

Both the US and Russia have expressed a desire to have a nuclear arms control agreement beyond 2026, when New START is slated to expire. Kimball said it is in the countries' mutual interest to maintain limits on their nuclear stockpiles.

"President Biden has been very clear about his commitment to negotiating to maintain the arms control structure beyond the expiration of START in 2026. And we remain committed to that goal," Elizabeth Rood, the top US diplomat in Moscow, told RIA Novosti.

"Until that happens, we will continue to hold discussions within the framework of the Bilateral Consultative Commission, which is the mechanism of the Treaty. And we will wait for the opportunity to resume the strategic dialogue," Rood added.

Administration officials have said that the willingness to discuss the arms control agreement, even as Russia carries out its war in Ukraine, demonstrate the US commitment to diplomacy and mitigating the risk of nuclear catastrophe.

Washington "has channels for managing risk with the Russian Federation, particularly nuclear risks," Rood said, adding that "that was the purpose of CIA Director Burns' meeting with his Russian counterpart."