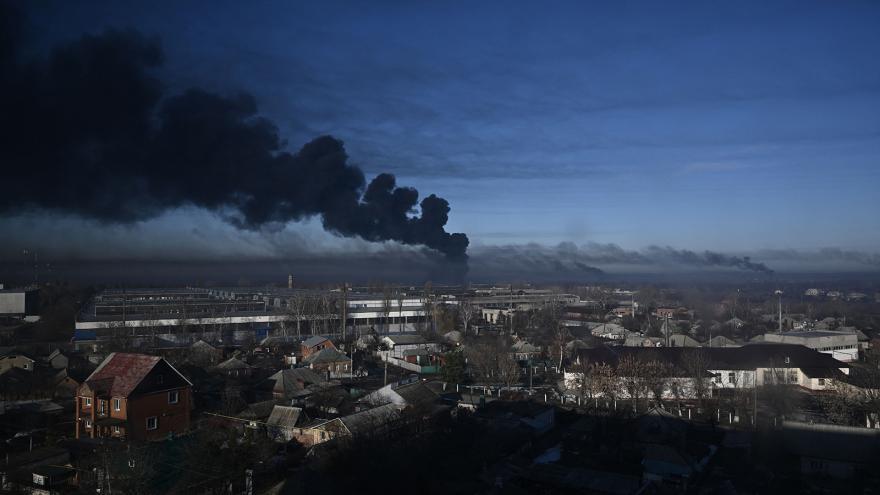 (CNN) -- It took a few weeks of sleeping on crates of grenades for a bed and hiding his face from Ukrainians amid a growing sense of guilt, for the Russian junior officer to come to his conclusion: This wasn't his battle to fight.

"We were dirty and tired. People around us were dying. I didn't want to feel like I was part of it, but I was a part of it," the officer told CNN.

He said he went to find his commander and resigned his commission on the spot.

CNN is not naming the officer or including personal details that would help to identify him for his security.

His story is remarkable, but it could also be one of many, according to opponents of the war in Russia as well as in Ukraine who say they have heard of a lot of cases of soldiers -- both professional and conscript -- refusing to fight.

Russian troops have been struggling with low morale and heavy losses in Ukraine, according to the assessments by Western officials including the Pentagon.

The UK's Intelligence, Cyber and Security Agency says some have even refused to carry out orders.

The Russian Ministry of Defense has not responded to a CNN request for comment.

The officer who spoke to CNN says he was part of the massive troop build-up in the west of Russia that triggered global fears for Ukraine. But he said he did not think much about it, even on February 22 this year when he and the rest of his battalion were asked to hand over their mobile phones while stationed in Krasnodar, southern Russia, without any explanation.

That night they spent hours painting white stripes on their military vehicles. Then they were told to wash those off, he said. "The order has changed, draw the letter Z, as in Zorro," he remembered being told.

"The next day we were taken to Crimea. To be honest, I thought that we would not go to Ukraine. I didn't think it would come to this at all," said the man.

As his unit gathered in Crimea -- the Ukrainian region annexed by Russia in 2014 -- President Vladimir Putin launched his further invasion of Ukraine on February 24.

But the officer said he and his comrades were unaware, as no news was passed to them, and they were out of touch with the outside world without their phones.

Two days later they were themselves ordered into Ukraine, the officer told CNN.

"Some guys refused outright. They wrote a report and left. I don't know what happened to them. I stayed. I do not know why. The next day we went," he said.

The officer said he did not know the goal of the mission; that the bombastic claims from Russian President Vladimir Putin that Ukraine was part of Russia and needed to be "de-Nazified" did not make it through to the men asked to fight.

"We were not hammered with some kind of 'Ukrainian Nazis' rhetoric. Many did not understand what this was all for and what we are doing here," he said.

He told CNN he had hoped for a diplomatic solution and felt guilty about Russia invading Ukraine. But he added he was not well versed in politics.

The first thing the soldier remembers after his unit drove over the border in a long column of vehicles was seeing boxes of Russian dry rations scattered everywhere and piles of destroyed equipment.

"I was sitting in the KAMAZ [truck], holding a gun tightly to me. I had a pistol and two grenades with me," he said.

The force drove northwest, in the direction of Kherson. As they approached a village, a man with a whip jumped out and started whipping the convoy and screaming: "You all are f**ked!" the officer recalled.

"He almost climbed into the cabin where we were. His eyes were teary from crying. It made a strong impression on me," he added. "In general, when we saw the locals, we tensed up. Some of them hid weapons underneath their clothes, and when they got closer, they fired."

He said he would hide his face for shame as well as safety because he felt embarrassed to be seen by Ukrainians there. On their land.

He said the Russians came under heavier attack too, with mortars aimed at them on the second or third day they were in Ukraine.

"For the first week or so, I was in a state of aftershock. I didn't think about anything," he told CNN. "I just went to bed thinking: 'Today is March 1. Tomorrow I will wake up, it will be March 2 -- the main thing is to live another day.' Several times the shells fell very close. It's a miracle none of us died," he said.

Reactions in the ranks

The officer told CNN he wasn't the only soldier concerned or confused about why they had been sent to invade Ukraine.

But he also remembers some perking up when they learned that combat bonuses would soon be paid.

After a couple of weeks, the officer was deployed closer to the rear, accompanying equipment that needed repair, he said.

There he said he also became more aware of what was going on and had more time and energy to reflect.

"We had a radio receiver and we could listen to the news," he told CNN. "That's how I learned that shops are closing in Russia and the economy is collapsing. I felt guilty about this. But I felt even more guilty because we came to Ukraine."

He said his resolve hardened to the point where there was only one thing he could do.

"In the end, I gathered my strength and went to the commander to write a letter of resignation," he told CNN.

At first, the commander rejected the approach and told him it was impossible to refuse to serve.

"He told me there could be a criminal case. That rejection is betrayal. But I stood my ground. He gave me a sheet of paper and a pen," the officer told CNN, adding he wrote his resignation there and then.

There have been other reports inside the tightly controlled Russian media environment of soldiers refusing to fight.

Valentina Melnikova, executive secretary of the Union of Soldiers' Mothers Committees of Russia, said there were many complaints and concerns heard when the first units rotated out of Ukraine for rest.

"Soldiers and officers wrote resignation reports, that they could not return successfully," she told CNN. "The main reasons are, firstly, the moral and psychological state. And the second reason is for moral convictions. They wrote reports then and are writing reports now."

Melnikova, whose organization was formed in 1989, said all troops had the right to file reports while acknowledging that some of the commanders might refuse them or try to intimidate soldiers.

Her organization often advises soldiers on how to write those reports and provides legal counsel.

The Ukrainian Intelligence Directorate reported that in several Russian units, specifically the 150th Motorized Rifle Division of the 8th Army of the Southern Military District, as many as 60% to 70% of soldiers were refusing to serve.

In Russia, Melnikova told CNN there were "many" cases of soldiers refusing to fight in Ukraine but declined to give details, citing legal and safety concerns.

Aleksei Tabalov, a human rights activist and director of an organization helping Russian conscripts, told CNN that he personally consulted two soldiers who resigned from the military.

"The same guys who refused to fight and turned to us, there were two of them, but from the brigade that they left, another 30 people refused to fight," Tabalov told CNN.

Tabalov said that when filing for resignation, the soldiers cited that they did not agree to participate in a special operation against Ukraine when signing the contract.

Going absent without leave from the Russian army is a criminal offense punishable by prison sentences. However, those serving under contract have a legal right to resign within 10 days of leaving service with an explanation for the motive for their departure.

"I can't say that this is a mass phenomenon, but this phenomenon is quite strong. If you estimate for all the cases from other organizations plus indirect information, the number goes over 1,000," Tabalov told CNN.

He said recruitment is still ongoing in the country, and new soldiers are often from poorer regions with fewer prospects.

Thousands of Russian soldiers have been killed in Ukraine since the war began. The Ukrainian Armed Forces estimate Russian losses at more than 22,000. The last time the Russian Ministry of Defense reported on losses was on March 25, reporting the deaths of 1,351 servicemen.

The ministry did not respond to CNN's request for an update.

The officer who spoke to CNN is now with his family.