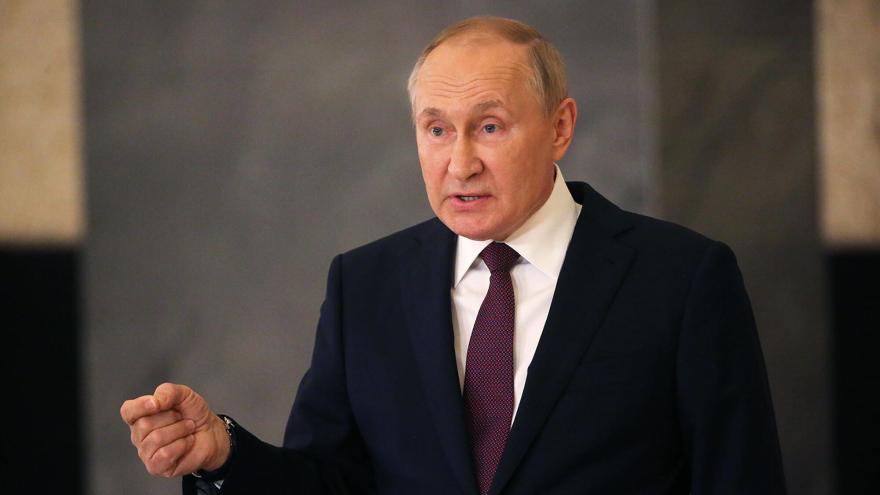 Russia's military is divided over how best to counter Ukraine's unexpected battlefield advances, as Moscow has found itself on the defensive in both the east and the south. Russian President Vladimir Putin is seen here on September 16, in Uzbekistan.

(CNN) -- Russia's military is divided over how best to counter Ukraine's unexpected battlefield advances this month, according to multiple sources familiar with US intelligence, as Moscow has found itself on the defensive in both the east and the south.

Russian President Vladimir Putin is himself giving directions directly to generals in the field, two sources familiar with US and western intelligence said-- a highly unusual management tactic in a modern military that these sources said hints at the dysfunctional command structure that has plagued Russia's war from the beginning.

Intelligence intercepts have captured Russian officers arguing among themselves and complaining to friends and relatives back home about decision-making from Moscow, one of these sources told CNN.

And there are significant disagreements on strategy with military leaders struggling to agree on where to focus their efforts to shore up defensive lines, multiple sources familiar with US intelligence said.

The Russian Ministry of Defense has claimed that it is redeploying forces toward Kharkiv in the northeast -- where Ukraine has made the most dramatic gains -- but US and western sources say the bulk of Russian troops still remain in the south, where Ukraine has also mounted offensive operations around Kherson.

Putin announced a partial mobilization on Wednesday that is expected to include the call-up of up to 300,000 reservists. He has for months resisted taking that step and Biden administration officials said Wednesday that the fact he has moved to do so now highlights the severity of Russia's manpower shortages and signals a growing desperation.

It's not clear that the mobilization will make any operational difference on the battlefield, or merely prolong the length of the war without changing the outcome, according to Russian military analysts.

And while Russia flails on the battlefield, officials in Moscow have scrambled to assign blame for Russia's abrupt turn in fortunes, a senior NATO official said.

"Kremlin officials and state media pundits have been feverishly discussing the reasons for the failure in Kharkiv and in typical fashion, the Kremlin seems to be attempting to deflect the blame away from Putin and onto the Russian military," this person said.

Already, there has been a reshuffling of military leadership in response to the battlefield failures -- leaving Russia's command structure even more jumbled than it was before, sources say. The commander who oversaw the majority of the units around the Kharkiv region had been in the post only 15 days and has now been relieved of duty, the NATO official said.

Russia has sent "a small number" of troops into eastern Ukraine -- some of whom had fled amid Ukraine's battlefield advances last week, according to two US defense officials -- an effort to shore up its weakened defensive lines.

But even if Russia is able to coalesce around a plan, US and western officials believe Russia is limited in its ability to mount a strategically significant response to Ukraine's counteroffensive operations that in recent days, sources say, has swung the momentum in Kyiv's favor. Even after the announcement of the partial mobilization, officials are skeptical that Russia is capable of quickly deploying large numbers of troops into Ukraine given its ongoing problems with supply lines, communications and morale.

The "small scale" of the Russian redeployment is a signal of its inability to mount any serious operations, the senior defense official told CNN.

So far, Russia has responded to Ukraine's advances by launching attacks against critical infrastructure like dams and power plants -- attacks that the US sees as largely "revenge" attacks rather than operationally significant salvos, this person said.

Absent more manpower that, right now, it simply doesn't have, sources said Russia has few other options to penalize or push back Ukrainian forces. Putin is "struggling," National Security Council coordinator for strategic communications John Kirby said in an appearance on CNN on Wednesday. Russia's military has "poor unit cohesion, desertions in the ranks, soldiers not wanting to fight," Kirby said.

"He has terrible morale, unit cohesion on the battlefield, command and control has still not been solved. He's got desertion problems and he's forcing the wounded back into the fight. So clearly, manpower is a problem for him," Kirby said. "He feels like he's on his back foot, particularly in that northeast area of the Donbass."

Putin's mobilization order is significant because it is a direct acknowledgment that Moscow's "special military operation" wasn't working and needed to be adjusted, military analysts said.

But for now, there are more questions than answers about its precise operational impact. It's the first such order handed down in Russia since World War II, offering military analysts limited modern data on which to base their predictions.

Even if Moscow can grow its number of soldiers -- both by preventing existing contract service members from leaving service and by mobilizing reservists -- it will struggle to train, equip and integrate these troops into existing units, said Michael Kofman, the director of the Russia Studies Program at the Center for Naval Analyses. And even if that solves some near-term manpower problems, these will likely not be high-quality recruits, Kofman and others noted.

Even in the best-case scenario, it will also take Moscow some time to field fresh troops.

"I think it's reasonable to say that partial mobilization probably will not reflect itself on the battlefield for several months at the earliest, and could expand Russia's ability to sustain this war, but not alter its outcome," Kofman said.

Russia's longstanding failures in planning, communications and logistics have been compounded by punishing losses in its retreat from around Kharkiv, sources said. Russia left behind "a lot" of equipment in its retreat, according to the NATO official. And at least one storied unit, from the First Guards Tank Army, has been "decimated," this person said.

"With its northern axis all but collapsed, this will make it harder for Russian forces to slow the Ukrainian advance, as well as to provide cover for the retreating Russian troops," the official said. "We think it will also severely impair Russia's plans to occupy the entirety of the Donbas."

The wild card remains, as always, the Russian President. Putin on Wednesday once again threatened the use of nuclear weapons, a threat the US officials have said they are taking "seriously" but have seen no immediate indication he is planning on following through on.

Pro-Russian authorities in some eastern occupied regions of Ukraine have also announced their intention to hold political referendums on joining Russia, a maneuver some analysts say Russia could use as a pretext for military action.

But, the senior NATO official said, "Overall, Russia now finds itself on the defensive. Ukraine has the initiative, forcing Russia to take stopgap measures simply to avoid further losses."

"If Ukraine succeeds in undertaking sustained defensive operations, this could even further undermine the sustainability of Russian defenses," this person said.