Sales of bulletproof backpacks surged 200% to 300% in the wake of last week's mass shootings, companies say 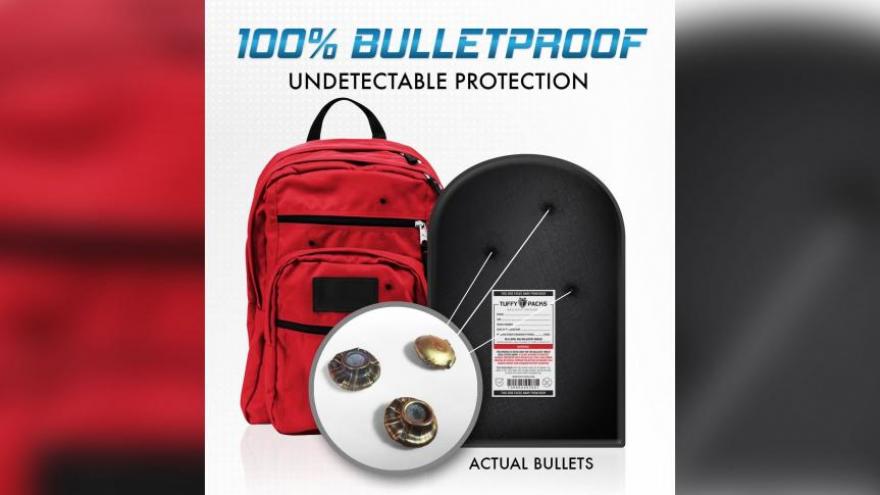 Sales of bulletproof backpacks and inserts, like this one from TuffyPacks, have skyrocketed.

(CNN) -- With every mass shooting in the United States comes renewed fear of another.

It's a fear particularly potent among parents of young children and especially now, days away from the start of the school year. It's not unwarranted -- CNN examined 10 years of shootings on K-12 campuses and found two sobering truths: School shootings are increasing, and no type of community is spared.

Instead of letting their children choose a plastic backpack covered in Hello Kitty or Spider-Man, some parents are purchasing bags that double as shields in case kids get caught in gunfire.

The retailers said backpack sales spike during the back-to-school season, and all three said they they saw a significant uptick in the aftermath of mass shootings.

Bulletproof backpacks are a 'consumer favorite'

To protect his two school-aged children, the former sheriff's deputy inserted body armor into their backpacks, he said. Classmates' parents asked for inserts for their children's bags, and it grew into a business.

The company's website calls the bulletproof backpack a "consumer favorite." Prices range from $160 to $490. Most are JanSport or High Sierra backpacks retrofitted with ballistic panels sewn into the back. The smallest offering, the "Junior Pack," is suggested for preschoolers.

Yasir Sheikh, president of Guard Dog Security, said the company launched a line of bulletproof backpacks in 2013. And since 2018, they've cropped up in major retailers like Office Depot and Bed Bath & Beyond.

They're marketed as "bulletproof" or "bullet-resistant," depending on the store, but the two are synonymous, he said. The bags retail for between $119.99 and $299.99.

Sheikh couldn't draw a direct correlation between mass shootings and sales increases, but he said there was a significant rise in demand after the Parkland, Florida, school shooting last year.

"What we're finding is, sometimes, events trigger heightened awareness of the product," he said.

The Florida company builds and designs its bulletproof backpacks and tests them at a facility accredited by the National Institute of Justice, a research branch of the Department of Justice.

Guard Dog's backpacks offer Level IIIA protection, a National Institute of Justice standard that means they were tested to withstand 9-mm, .44 magnum and shotgun ammunition. They're not built to protect against the ammunition of rifles or assault weapons.

Steve Naremore, CEO of TuffyPacks, said he launched the company in 2015 after his daughter, who teaches fourth grade, told him how frequently her school required her to perform active shooter drills with her students.

Although the company sells some retrofitted backpacks, it specializes in lightweight, removable ballistic shields.

The Level IIIA-rated shields are made of a ballistic-rated synthetic fiber that's five times stronger than steel, according to the website. The 24-layer inserts last up to five years.

About 95% of the company's customers are parents and grandparents who buy them for children, Naremore said.

"We always see spikes in sales in the days or weeks after shootings," he said. TuffyPacks' sales rose nearly 300% over the past week, according to Naremore.

There's a mixed reaction from consumers

The weekend's mass shootings are a painful reminder for parents

Raquel K.W. Donahue decided to purchase a bulletproof insert for her 6-year-old son before he starts first grade. She opted for the insert instead of the pricier backpack because he'll outgrow a bag quickly, and the insert was marketed to last 20 years, she said.

Donahue is a reference and instruction librarian at Prairie View A&M University in Texas. About an hour and a half away is Santa Fe, Texas, where 10 people were killed at a high school in May 2018; 10 hours away is El Paso, where a gunman killed 22 people at a Wal-Mart on Saturday.

Her campus, like all public college campuses in the state, is legally required to allow adults over 21 who have concealed carry permits to carry a handgun on school grounds.

Gun violence is something she's thought about fleetingly, she said, but the horror in El Paso and in Dayton, Ohio, brought it to the forefront, not just for her son but for her family.

Her brother lives in El Paso, and it wasn't until Monday that she heard from him and learned that he was uninjured. And with racist sentiment swirling in the state and beyond, being Mexican American has become an "added concern" to gun violence, she said.

"I dislike the additional level of anxiety that's sort of randomly interjected into my life," she said.

"There is the morbidity factor," Naremore acknowledged of the product's purpose.

The very existence of a bulletproof backpack forces parents confront an uncomfortable reality, but it's a conversation many children are having in schools and an essential one for parents who want to protect them, Sheikh said.

"When I was in school, there was no such thing as active shooter drills," he said. "But times have changed."

Donahue's son brought it up first. He came home from an active shooter drill in kindergarten and shared what he'd learned to do if a "bad guy comes to hurt him," she said.

"He's worried about things I never dreamed of," she said. "It makes me sad -- and angry."

She's had active shooter trainings at work, too. After a 2014 shooting in a library at Florida State University in Tallahassee -- the same town where a gunman would kill two women in a yoga studio four years later -- Donahue her fellow librarians have planned what they'd do in case of an attack.

"It's sort of incredible how this is impacting both my personal and professional life."

Companies like Guard Dog make bulletproof bags for Donahue, too. Although their more popular items are children's backpacks, they manufacture laptop bags and heavier, larger packs, modeled by men in suits.

Donahue and her son's father saw the backpack inserts emblazoned with the Avengers and Disney princesses -- TuffyPacks stopped selling them after Disney released a statement saying it hadn't authorized the use of the characters -- but they chose a black AR500 Level III bulletproof insert. Unlike the children's packs sold in Office Depot, her son's plate can withstand rifle ammunition.

"I think we're both upset that this is the reality, but we feel it's important to address the reality," she said. "It's not a guarantee, but it's some measure we can take to feel just a little bit better about sticking him on that school bus every day."