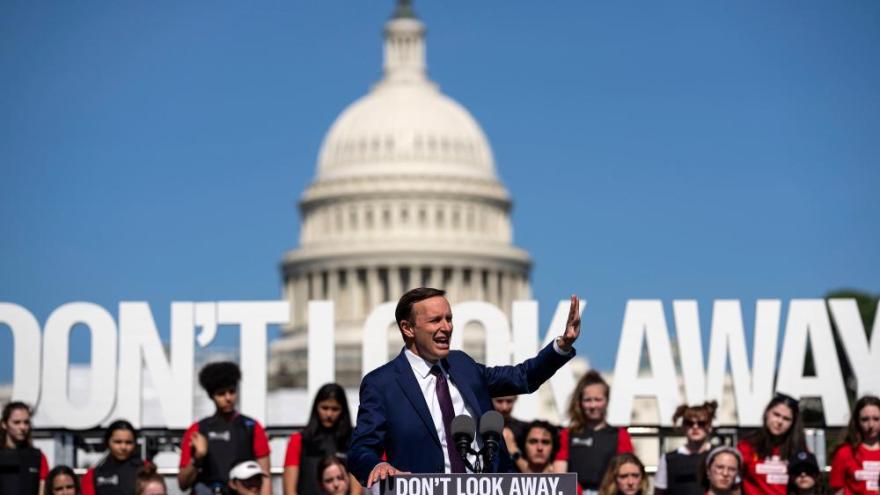 Connecticut Democratic Sen. Chris Murphy speaks with students wearing body armor stand behind him on a stage during a gun safety reform rally near the Capitol Reflecting Pool in Washington, DC, on June 6.

(CNN) -- Democratic Sen. Chris Murphy of Connecticut said Senate Democrats don't have the 60 votes needed to advance an assault weapons ban bill but expressed optimism on CNN's "State of the Union" that something could get done in the next Congress if Democrats keep their seat in Georgia.

"I'm glad that President (Joe) Biden is gonna be pushing us to take a vote on an assault weapons ban," he told CNN's Dana Bash on Sunday morning. "The House has already passed it. It's sitting in front of the Senate. Does it have 60 votes in the Senate right now? Probably not. But let's see if we can try to get that number is close to 60 as possible. If we don't have the votes, then we'll talk to [Senate Majority Leader Chuck] Schumer and maybe come back next year, with maybe an additional senator, and see if we can do better."

Murphy also said there needs to be a conversation in the US Senate about funding law enforcement in counties that are refusing to enforce state and national gun laws.

"They have decided that they are going to essentially refuse to implement laws that are on the books. That is a growing problem in this country," he said. "And I think we're gonna have to have a conversation about that in the United States Senate. Do we want to continue to supply funding to law enforcement in counties that refuse to implement state and federal gun laws?"

He added: "I'll talk to my colleagues about what our approach should be to this problem. But 60% of counties in this country are refusing to implement the nation's gun laws, we've got to do something about that."

A recent shooting at an LGBTQ club in Colorado Springs, Colorado, involved an assault-style weapon and a handgun, while officials said the shooter at a Walmart in Chesapeake, Virginia, last week was armed with a handgun and multiple magazines.

Democratic Gov. Jared Polis of Colorado was pressed in two separate interviews Sunday about a total ban on assault style weapons, telling both NBC and CBS that a variety of factors go into his thinking on the issue.

"I think all of these things, including the red flag law and expanding its use, should really be looked at," Polis told NBC.

"We learn from each instance, but you also have to look at all of the causes," he said in his interview with CBS. "We also need to pursue the mental health aspect of this and other shooting incidences."

Colorado passed its red flag law in 2019, which is intended to temporarily prevent an individual in crisis from accessing firearms through a court order, triggered by the individual's family, a member of their household or a law enforcement officer. While it's still unclear whether a red flag law was triggered by the shooter's past incident of a bomb threat in 2021, Polis told CBS: "I'm sure what will be looked into is, 'Why wasn't it pursued?'"

Congress returns this week with a jam-packed to-do list in the lame duck session, focused primarily on the must-pass government funding bill, as well as other priorities. But any action on gun legislation -- particularly the assault weapons ban Biden has repeatedly called for -- does not have the votes to pass. And the reality of a divided Congress in next year's session makes it highly unlikely that anything will pass over the next two years.