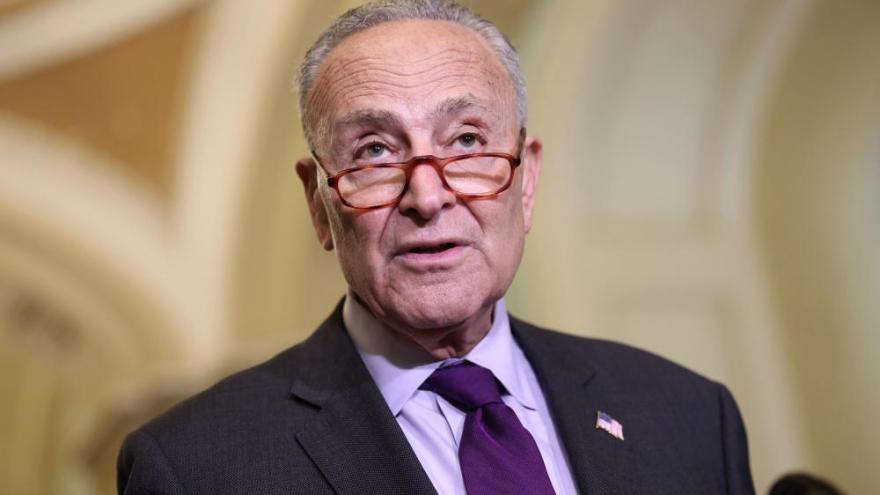 Senate Majority Leader Charles Schumer, seen here in September 2021 in Washington, DC, is expected to hold a final passage vote September 29 to approve a short-term government funding extension that would prevent a shutdown.

(CNN) -- The Senate voted on Thursday to approve a short-term government funding extension that would prevent a shutdown at the end of the week. The bill was approved on a bipartisan basis with a vote of 72 to 25.

Government funding is currently on track to expire Friday at midnight, but the stopgap bill would extend funding through December 16, setting up a potential funding fight at the end of the year instead.

The House will next need to pass the measure once it is approved by the Senate before it can be sent to President Joe Biden for his signature.

Lawmakers have expressed confidence there will not be a shutdown, but it is typical of Congress in recent years to run right up against funding deadlines.

In part, that's because the opposing parties find it easier to reach last-minute deals to stave off a shutdown under tight time pressure.

This time around, neither party wants to be blamed for a shutdown -- especially so close to the consequential November midterm elections where control of Congress is at stake and as Democrats and Republicans are both trying to make their case to voters that they should be in the majority. Lawmakers up for reelection are also eager to finish up work on Capitol Hill so they can return to their home states to campaign.

In a sign of just how much lawmakers want to prioritize time on the campaign trail, Senate Majority Leader Chuck Schumer announced Thursday afternoon that there will be no roll call votes in the Senate until after the November midterm elections.

In addition to money to keep government agencies afloat, the short-term funding measure unveiled earlier this week provides around $12 billion for Ukraine as it continues to counter Russia's invasion of the country, and would require the Pentagon to report on how US dollars have been spent there. The aid to Ukraine is a bipartisan priority.

The Senate took a key vote to advance the government funding measure earlier this week after West Virginia Democratic Sen. Joe Manchin dropped a request to include a controversial permitting reform proposal that had come under sharp criticism from Republicans and liberals.

The plan would have expedited the permitting and environmental review process for energy projects -- including a major pipeline that would cross through Manchin's home state of West Virginia. Senate Democratic leaders had been pushing to pass it along with government funding as a result of a deal cut to secure Manchin's support for Democrats' Inflation Reduction Act -- a key priority for the party -- which passed over the summer.

But Republicans warned they would vote against the effort to tie permitting reform to the funding extension, in part because they did not want to reward Manchin over his support for the Inflation Reduction Act.

At the same time, some liberal members of the Senate Democratic caucus had expressed concern over environmental impacts.

The $12 billion in additional funding for Ukraine provides money for the US to continue sending weapons, money to replenish US stocks of weapons that have been sent to Ukraine over the past seven months during the ongoing conflict and additional economic support.

In order to continue providing Ukraine with weapons to counter Russia's offensive, the bill allocates an additional $3 billion for the Ukraine Security Assistance Initiative. This pot of money allows US to procure and purchase weapons from industry and send them to the country, instead of drawing directly from US stockpiles of weapons.

The bill also authorizes an additional $3.7 billion in presidential drawdown authority funding, which allows the US to send weapons directly from US stockpiles, and $1.5 billion is included to "replenish US stocks of equipment" provided to Ukraine, a fact sheet from Senate Democrats about the bill states.

The bill designates $4.5 billion for the "economic support fund" to provide "support to maintain the operation of Ukraine's national government," the fact sheet states.

The US has provided Ukraine with significant economic and military support since Russia's invasion of the country began in February, committing "more than $16.2 billion in security assistance to Ukraine," since the Russian invasion began in February, a Department of Defense release stated on Wednesday.