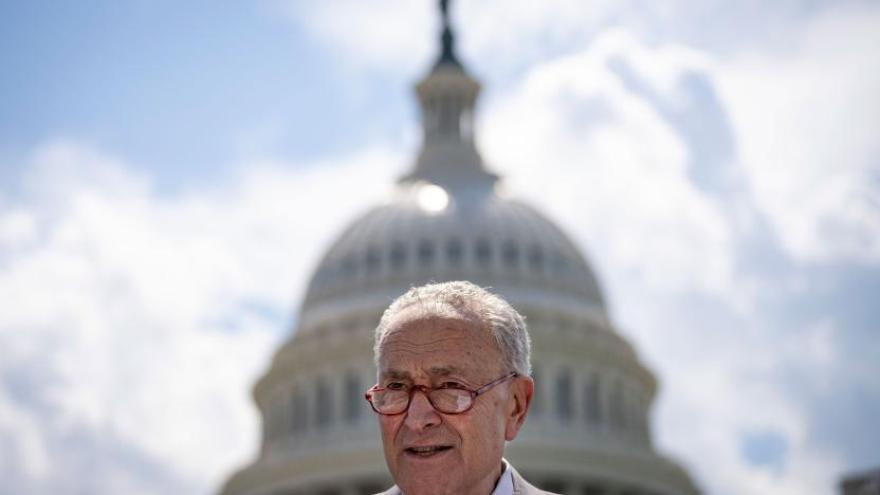 Senate Majority Leader Chuck Schumer speaks during a news conference in August 2022 in Washington, DC. The Senate approved a treaty to combat the climate crisis on September 21.

The vote was 69-27, with more than half of Republican senators objecting.

In 2016, the United Nations struck an agreement known as the Kigali Amendment to the 1987 Montreal Protocol on Substances that Deplete the Ozone Layer. Senators who support ratifying the Kigali Amendment said its adoption would position US industries to lead the world in the creation of new, environmentally sound ways of cooling.

"This measure will go a long way to lowering global temperatures, while also creating tens of thousands of American jobs, and deal with the fact that China rarely participates in global cooperation when it comes to putting their own economy and jobs ahead of ours," Senate Majority Leader Chuck Schumer said.

The Kigali amendment is supported by business groups like the Chamber of Commerce and environmental groups like the Natural Resources Defense Council. Advocates for its ratification said it would prevent global warming by up to half a degree Celsius, while benefiting manufacturers developing alternative products.

"Today's Senate vote was a decade in the making and a profound victory ?for the climate and the American economy," said US Special Presidential Envoy for Climate John Kerry.

In 2020, Congress passed a bill that directed the Environmental Protection Agency to significantly reduce HFCs in line with the goals of the Kigali Amendment. Last year, the Biden administration announced it would move to reduce the use of HFCs by 85% in the next 15 years. And in May, the Senate Foreign Relations Committee sent the ratification of the Kigali Amendment to the Senate floor without opposition.

But since then, some Republicans have since grown wary that China agreed to the treaty on more advantageous terms since it is considered a developing country. The Senate passed an amendment from GOP senators Mike Lee of Utah and Dan Sullivan of Alaska designed to alleviate some of the Republican concerns that the agreement would treat China differently than other developed nations.

Tennessee Sen. Bill Hagerty, a Republican member of the Senate Foreign Relations Committee, told CNN that the treaty gives "China an advantage that they don't deserve."

"We need to stand up and start addressing China in these multilateral forums," Hagerty said.