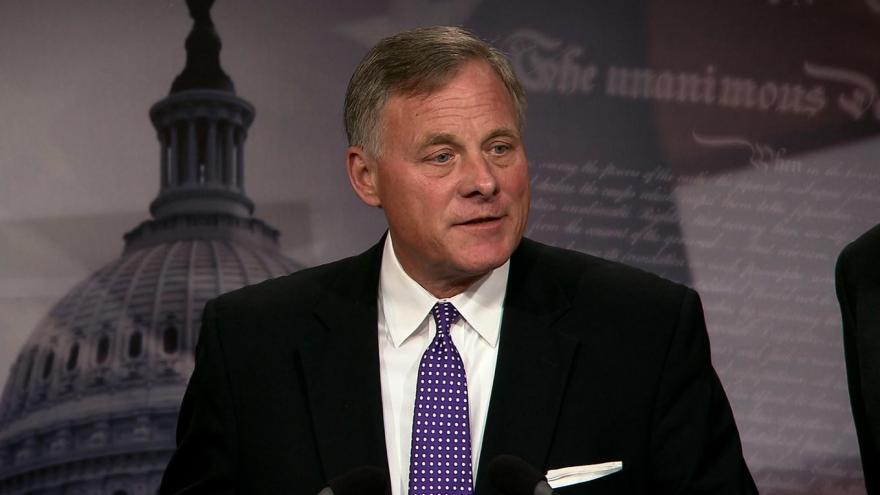 NPR obtained a recording of Burr speaking on February 27 at a North Carolina state society event, in which he warned about the dangers the virus posed to the US at the same time that President Donald Trump was downplaying the risk of coronavirus.

(CNN) -- Senate Intelligence Chairman Richard Burr is asking the Senate Ethics Committee to review his sale of up to $1.7 million in stocks last month ahead of the sharp market decline that's resulted from the novel coronavirus global pandemic, according to Senate documents.

Burr's stock sales have come under fire after he sold them off just days before the market began a downturn as a result of the coronavirus outbreak shutting down businesses and travel in the US and across the world.

Burr said Friday that he did not base his sales on any information he received as chairman of the Intelligence Committee.

"I relied solely on public news reports to guide my decision regarding the sale of stocks on February 13," Burr said in a statement. "Specifically, I closely followed CNBC's daily health and science reporting out of its Asia bureaus at the time. Understanding the assumption many could make in hindsight however, I spoke this morning with the chairman of the Senate Ethics Committee and asked him to open a complete review of the matter with full transparency."

Burr's committee has received periodic briefings on coronavirus as the outbreak has spread, but the committee did not receive briefings on the virus the week of Burr's stock sales, according to a source familiar with the matter.

A week before his stock sell-off, Burr authored an op-ed with GOP Sen. Lamar Alexander of Tennessee titled, "Coronavirus prevention steps the U.S. government is taking to protect you" in which the senators wrote the US was "better prepared than ever before to face emerging public health threats, like the coronavirus." Burr has also worked on legislation aiding US preparations for pandemics for years.

There's no indication that what Burr did violated the law or Senate rules. But the stock sales are being scrutinized because the sell-off helped Burr avoid the fate many Americans are staring down as their investments are dwindling in the sinking markets. The sales are notable in particular because they represented a large share of Burr's stock portfolio, between 25% and 75%, based on his 2018 financial disclosure filing, according to the Center for Responsive Politics.

The stock sale was first reported by ProPublica and the Center for Responsive Politics.

"Senator Burr filed a financial disclosure form for personal transactions made several weeks before the U.S. and financial markets showed signs of volatility due to the growing coronavirus outbreak," a Burr spokesperson said in a statement. "As the situation continues to evolve daily, he has been deeply concerned by the steep and sudden toll this pandemic is taking on our economy."

Two weeks after the sales, the North Carolina Republican sounded a blunt warning in February about the dire impact of the novel coronavirus during a private event in Washington, according to audio obtained by NPR, which contrasted with President Donald Trump's public statements at the time that suggested the virus would disappear.

There's no indication that the stock sales were made on the basis of any inside information Burr received as a senator, or that he broke any Senate rules by selling the stock. Congress passed the Stock Act in 2012 that made it illegal for lawmakers to use inside information for financial benefit. Burr was one of three senators to vote against the bill.

Several other senators from both parties also sold and bought stock over the past several weeks as the economic downturn approached and they received briefings on the outbreak.

GOP Sen. Kelly Loeffler of Georgia and her husband sold 27 stocks valued between $1.275 million and $3.1 million from January 24 through February 14, according to Senate records. They also purchased three stocks at a value of $450,000-$1 million, including shares in Citrix, a software company that's gained in value since last month.

Loeffler, who was appointed to her seat in December, denied having any knowledge of the stock sales, saying she uses a third-party financial adviser and did not learn of the trades until later. Loeffler's husband, Jeffrey Sprecher, is chairman of the New York Stock Exchange.

Exact amounts of lawmakers' holdings in the stocks are unknown because they are only required to report the sales as a range.

On February 13, as the coronavirus was spreading, it had yet to hit the US in a manner that's sent the markets into a tailspin and sparked warnings of a recession. That day, the Dow Jones Industrial Average opened at 29,436. Ten days later, it began a downturn that's sent the average down to 20,087, a loss of more than 31%.

The average loss in the value of the stocks Burr sold from February 13 until Thursday has been about 39%, according to a CNN analysis.

Global cases of coronavirus had topped 65,000 on February 13, the vast majority of which were still inside China. At that point, there were a reported 570 cases in 25 countries outside of China. The global death toll was nearly 1,500, all but three of which had occurred in China.

Two weeks later, the virus was spreading, but the President was downplaying the threat and predicting it would not have a large impact in the US.

"It's going to disappear. One day it's like a miracle, it will disappear," Trump said on February 27. "And from our shores, you know, it could get worse before it gets better. It could maybe go away. We'll see what happens. Nobody really knows."

A day earlier, Trump predicted the number of cases in the US could quickly drop to zero.

"When you have 15 people, and the 15 within a couple of days is going to be down to close to zero, that's a pretty good job we've done," Trump said on February 26.

Burr had a different message when he spoke the same day Trump said the virus would disappear to a private North Carolina state society event. In the speech at the Capitol Hill Club in Washington, a private GOP social club, Burr warned attendees they might have to alter their travel, schools could close and the military would get involved in the response inside the US, according to audio of his remarks obtained by NPR.

"There's one thing that I can tell you about this: It is much more aggressive in its transmission than anything that we have seen in recent history," Burr said, according to the recording obtained by NPR. "It is probably more akin to the 1918 pandemic."

Burr continued: "There will be, I'm sure, times that communities, probably some in North Carolina, have a transmission rate where they say, 'Let's close schools for two weeks. Everybody stay home,'" he said.

Burr responded to NPR's story in a series of tweets taking issue with the characterization of the event as being for donors. "Attendees also included many non-members, bipartisan congressional staff, and representatives from the governor's office," he said on Twitter. Burr said that the message he delivered at the speech "is the one public health officials urged all of us to heed as coronavirus spread increased: Be prepared."

Burr and his committee have been briefed on the coronavirus outbreak as it has spread, but Burr's February warnings were based primarily on his experience working on public health preparedness and pandemics, as well as the warnings already coming from public health officials, according to two sources.

Vice President Mike Pence had just been tapped to lead the coronavirus task force, there had been increased warnings about the outbreak in Italy and travel restrictions in China had already been in place for weeks.

Burr is also an author of the Pandemic and All-Hazards Preparedness Act, which was first enacted in 2006 and was renewed last year.

Publicly, Burr did not issue such dire warnings about the coming impact to the US due to the coronavirus outbreak, though he did talk about the need for the government to respond to the virus. Burr wrote the op-ed with Alexander on February 7 outlining the steps the US government had available to combat coronavirus. At a March 3 Senate hearing, Burr questioned Centers for Disease Control and Prevention officials on the issues with producing tests for coronavirus.

"Senator Burr has been banging the drum about the importance of public health preparedness for more than 20 years. His message has always been, and continues to be, that we must be prepared to protect American lives in the event of a pandemic or bio-attack," Burr spokeswoman Caitlin Carroll said in a statement when asked about the NPR recording. "Since early February, whether in constituent meetings or open hearings, he has worked to educate the public about the tools and resources our government has to confront the spread of coronavirus. At the same time, he has urged public officials to fully utilize every tool at their disposal in this effort."

Liberal groups called on Burr to be investigated and resign Thursday after the stock sales were revealed, and even conservative Fox News host Tucker Carlson called for Burr's resignation.

This story has been updated to include additional developments Friday.