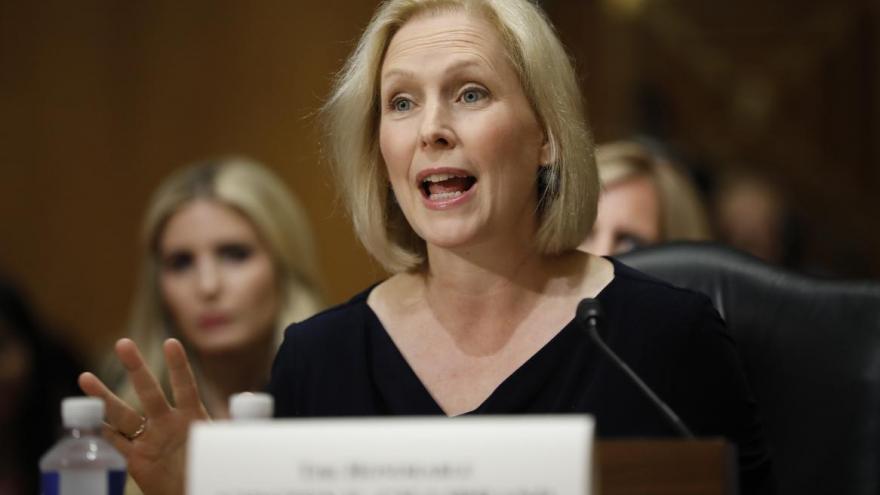 The National Defense Authorization Act, the annual defense bill that authorizes $770 billion in funding for the Defense Department, passed the Senate 89-10 with a bipartisan vote, and pictured, Sen. Kristen Gillibrand on July 11, 2018 on Capitol Hill in Washington, DC.

(CNN) -- The National Defense Authorization Act, the annual defense bill that authorizes $770 billion in funding for the Defense Department, passed the Senate on Wednesday with a broad bipartisan vote.

The legislation passed the House earlier this month meaning it now goes to the White House for President Joe Biden to sign it into law. The final vote total was 88-11. The original vote total was 89-10, but Democratic Sen. Cory Booker of New Jersey obtained unanimous consent to have his vote changed from "yea" to "nay" following the vote.

The bill not only authorizes funding for the Defense Department and outlines the policy agenda for the government's largest agency and the US military. This year, the bill includes several changes to the military justice system to overhaul how the US military handles sexual assault and harassment.

The final version of the bill also includes a 2.7% pay increase for military service members and Defense Department civilian employees, establishes a "multi-year independent Afghanistan War Commission" to examine the war in Afghanistan after the US military withdrawal and provides $300 million in military aid to the Ukrainian Security Assistance Initiative, summaries of the bill's text from the House and Senate Armed Services Committees stated.

"I've talked for weeks about the importance of this legislation given the global threats and international challenges that face our country from China to Russia to the fight against terrorists in the Middle East," Senate Minority Leader Mitch McConnell, a Republican from Kentucky, said Wednesday ahead of the final vote, noting he proudly backs the bill.

The Kentucky Republican also touted the importance of the bill's "robust funding to deter Russia in Europe."

But several key provisions that were expected to be passed in this year's version of the NDAA did not make it into the final version of the bill, including an amendment to repeal the 2002 Authorization for Use of Military Force Against Iraq, sanctions against countries participating in the Nord Stream 2 pipeline and additional sanctions against Russia.

No amendments were added to either version of the bill after Republican Sen. Marco Rubio of Florida put a hold on the Senate's version of the NDAA earlier in December. The final version of the bill was supposed to go through the Senate first with a package of agreed-to amendments, but Rubio refused to lift his hold unless his amendment, which would have prohibited the US from buying products produced in forced labor camps by Uyghurs in the Xinjiang province of China, was included.

Instead, the bill was negotiated with leadership from both chambers and passed in the House first, then the Senate. In this agreement, leadership decided both sides would not add amendments when the bill went to the floor of both chambers.

"The process was written with missteps and flaws," Sen. Richard Blumenthal, a Democrat from Connecticut, said last week.

GOP Sen. Joni Ernst of Iowa said the shortened process prevented both chambers from having a "robust debate" on key issues in the bill at a news conference criticizing the final version last week.

"We should have been on this bill much, much earlier so we could have a robust debate about the extremely important issues, especially the one of sexual assault and military justice reform," Ernst said.

Changes to the military justice system

In the version that is expected to pass the Senate, military commanders would have to forward complaints of sexual harassment against their subordinates to an independent investigator. Commanders are also removed from "decisions related to the prosecution of covered crimes," which include rape, sexual assault, murder, and manslaughter, according to the bill. Those decisions will instead be moved to an Office of the Special Trial Counsel that would be created in each service.

Gillibrand's had proposed that commanders be removed from the chain of command and from military judicial procedures around the prosecution of those crimes entirely when one of their subordinates is accused of sexual assault and harassment.

In the current bill, if the special trial counsel determines the crime does not fall under their authority or "elects not to prefer charges," they can refer the charges back to a commander or convening authority.

"We failed to separate from the chain of command certain key substantive decisions about the procedure, but also a whole raft of crimes that are related to sexual assault," Blumenthal said about the final version of the NDAA last week.

While the bill does not go far enough for this group of senators, the Pentagon and the White House called the changes included in the bill "historic."

At the Pentagon, spokesman John Kirby hailed the provisions as "an historic initiative here, removing those crimes and related crimes, the prosecution of them outside of the chain of command."

The White House called it "a historical point ... with meaningful reform of the military justice system and handling of handling of sexual assault cases."

"The President believes that this legislation takes groundbreaking steps to improve the response and ... prevention of sexual assault in the military," White House Deputy Press Secretary Karine Jean-Pierre told reporters traveling with the President to Kansas City, Missouri last week.

Other issues in the bill

On "anomalous health incidents," more colloquially known as Havana Syndrome, the bill authorizes the President to appoint a "senior official" to lead a "whole-of-government" effort to address the incidents, the summary states. The bill also creates a "Department of Defense cross functional team" to coordinate the Pentagon's response to the health incidents. The team will address "national security challenges," posed by the health incidents and ensure that those who have suffered from the incidents receive timely medical care, the bill states.

The bill directs the President to develop a classified "Grand Strategy with Respect to China," with an unclassified summary, the bill text states. It also directs DoD put together several reports on China's activities, from their military and security developments, modernization technologies for their military applications, to their strategy in Latin American and the Caribbean, the bill states.

On Afghanistan, the bill establishes the independent Afghanistan War Commission to "examine" the 20-year conflict, and it requires the secretary to provide "in-depth" reports to Congress about the US' ability to counter terrorism in the region, "accountability" of military equipment left in the country and "any plans" to evacuate American citizens and "Afghan allies" who are still there, the summary states.