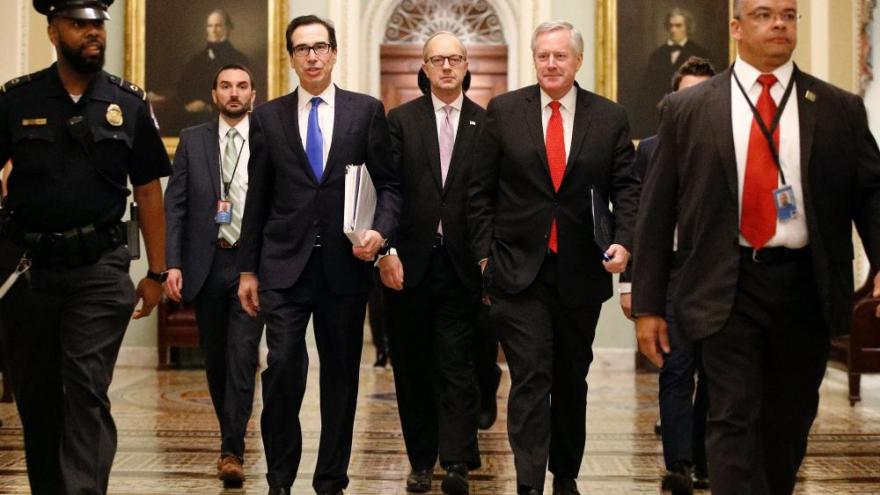 (CNN) -- The Senate unanimously passed a $2 trillion stimulus deal late Wednesday that includes sending checks directly to individuals amid the coronavirus crisis -- but it will likely take weeks before the money goes out.

President Donald Trump and Treasury Secretary Steven Mnuchin are still pushing to get the direct payments issued by April 6, a White House official told CNN. The date was floated as a deadline earlier by Mnuchin during negotiations.

Mnuchin said Wednesday that the administration expects to begin issuing direct payments to taxpayers within three weeks of a stimulus package being signed into law.

"Our expectation is within three weeks we will have direct payments out where we have depository information," Mnuchin said. "We're looking to get a lot more information and we have procedures to do that."

Mnuchin added that by the end of next week, the administration wants all banks to be able to originate loans on a "same day" basis.

Under previous programs in 2001 and 2008, the government took longer than a month to distribute checks.

"It is extremely unlikely that people will get payments by April 6 -- just two weeks from now," said Howard Gleckman, a senior fellow at the Tax Policy Center. "It is more realistic to expect them in a month or two."

A Republican Senate aide told reporters on Wednesday that they had heard estimates that the administration would be able to get started on about half of the rebates within a few weeks because the individuals had electronically filed their returns. The aide said that paper checks would "take a bit longer because the Bureau of Fiscal Service can only process and push out so many paper checks a week."

"It's a pretty significant number but it would probably take -- I think they were estimating four or five weeks to get the balance out," added the aide.

Under the legislation, single Americans would receive $1,200, married couples would get $2,400, and parents would see $500 for each child under age 17.

However, the payments would start to phase out for individuals with adjusted gross incomes of more than $75,000, and those making more than $99,000 would not qualify at all. The thresholds are doubled for couples.

About 90% of Americans would be eligible to receive full or partial payments, according to estimates by the Tax Policy Center. Lawmakers set aside $250 billion for the so-called recovery rebates.

Qualifying income levels will be based on 2019 federal tax returns, if already filed, and otherwise on 2018 returns. (Mnuchin earlier this month delayed the filing deadline until July 15.)

There are provisions in the bill to include those who don't earn enough to file returns, but some people may be missed, said Gleckman.

Under the legislation, lower- and middle-income Americans would receive just over two-thirds of the benefits, Gleckman said. An earlier version of the bill would have given lower-income households less or no assistance.

The Internal Revenue Service has sent out economic stimulus checks before.

In 2001, it took six weeks for the IRS to start sending out rebate checks authorized by President George W. Bush's tax cut. Then in 2008, amid the Great Recession, it took three months for the checks to start going out after the law was signed by Bush. In that case, Americans were required to file their tax return first, in order to get the check. Once they filed their return, it took between eight and 12 weeks to see the money.

"Certainly from what we've seen in the past, it's taken a pretty significant amount of time to get checks out after a policy is put in place," said Erica York, an economist at the Tax Foundation.

Those who had authorized direct deposits to their bank accounts likely received their money faster, York said. Those deposits were made over a three-week period in 2008, while paper checks were sent through the mail over a 10-week period.

Americans might receive the stimulus payments slightly faster than in 2008 because more of them now file electronically and provide the IRS with their bank information, Gleckman said. Some 88% of individual returns were filed electronically in 2018, compared with 58% in 2008.

Nina Olson, who served as the IRS's national taxpayer advocate from 2001 to 2019, said Wednesday that "maybe, just maybe," some payments could be issued by April 6, likely to people who have already filed their returns.

But there are other factors that may slow the process. Even absent the coronavirus challenges, the agency is working with a smaller budget and less staff than it had in 2010.

Now, because of the coronavirus, the agency has shut down its in-person taxpayer assistance centers located across the country at a time when people are sure to have questions about the emergency checks and other changes. Treasury announced last week that it is pushing back the tax return deadline to July 15. Additionally, Congress created a new tax credit designed to refund businesses that are offering their employees coronavirus-related paid leave.

"It's just a recipe for confusion," said Olson.

"There can be a lot of complexity involved in something as simple as sending a check out," she added.

First, the IRS will have to calculate each person's payment amount. Then, it will need the correct direct deposit information or mailing addresses. To get the money to people who don't usually file tax returns, it might have to request that information from the Social Security Administration or Veterans Affairs. In 2008, those people were required to file a return anyway in order to get their rebate.

Meanwhile, the IRS will inevitably be fielding calls from Americans concerned about when their check will arrive and whether they took all the necessary steps to receive the money. In 2001, the agency sent out letters to taxpayers telling them they didn't have to do anything in order to receive their check. But instead of staving off calls, the notice had the reverse effect. It resulted in the agency's first 1 million-call day, Olson said.

Later in 2008, after the economic stimulus checks were sent out, Olson testified before Congress, telling lawmakers that they should fund a new unit within the agency that would be dedicated to facilitating new and emergency initiatives. She argued that it would free up other employees to focus on improving the existing systems and executing the day-to-day work of the agency -- but that never happened.

This story has been updated with Senate passage and comments from the Trump administration and tax experts.

National Cathedral finds 5,000 masks that had been stashed away by its crypt for over 10 years

Dos and don’ts of getting, spending stimulus checks