Should Native Americans get preference over White people in adopting Native children? The Supreme Court may decide 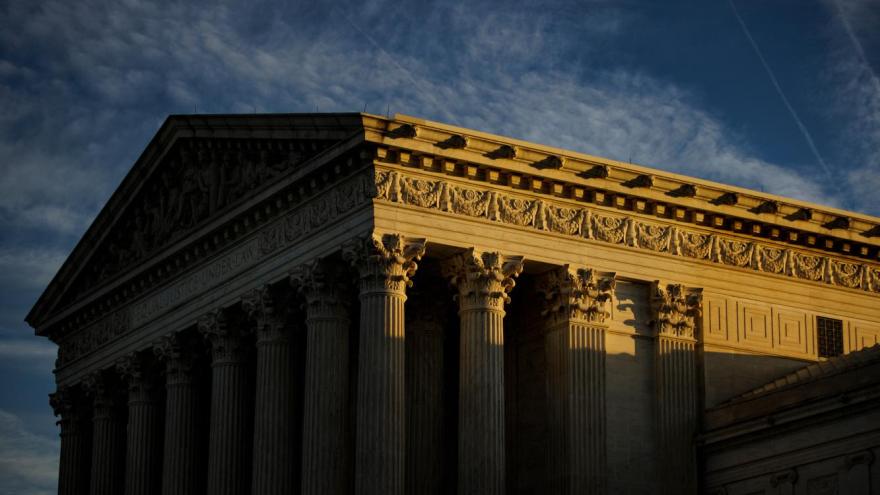 A group of non-Native foster parents, Republican states and conservative groups are seeking to overturn the Indian Child Welfare Act, enacted in 1978 to prevent the breakup of Native families. The Supreme Court heard arguments in the case last week.

(CNN) -- Throughout its history, the US has adopted policies that threatened to wipe out Native American tribes and their cultures -- or as one Army officer put it, "kill the Indian in him, and save the man."

A lawsuit now before the Supreme Court, tribal nations argue, has the potential to do the same.

The Supreme Court heard oral arguments Wednesday in Haaland v. Brackeen, a series of consolidated cases that seek to overturn the Indian Child Welfare Act. The law, enacted in 1978 to address the high numbers of Native children being separated from their families, gives tribal nations a say in child welfare cases involving children who are members of a federally recognized tribe or eligible for membership.

It also establishes placement preferences for when a Native child is up for adoption, giving priority first to the child's extended family, then other members of the child's tribe and then other Native families.

At the center of the case is a White couple from Texas who ran into obstacles while attempting to adopt a Navajo boy they were fostering. Litigation giant Gibson Dunn took on the case for free, and the couple was ultimately able to adopt the child over a Navajo family.

But the couple, who are plaintiffs in the case along with other White foster parents and the state of Texas, is now arguing that the Indian Child Welfare Act places them "last in line" to adopt more Native children. In other words, they argue, it discriminates on the basis of race.

Tribal leaders and experts in federal Indian law say that misunderstands both how the Indian Child Welfare Act and tribal nations function.

"To say that this is all just about race or racism really undermines the separate sovereignty that these governments have and their separate identities as tribal nations," says Elizabeth Reese, an assistant professor of law at Stanford University and a scholar of tribal and federal Indian law.

The case isn't just about the welfare of Native children, Reese and others say. They view it as an attack on tribal sovereignty.

The law was a response to systemic harms

The Indian Child Welfare Act was enacted specifically to remedy federal policies that systematically separated Native children from their families and communities.

In the 19th and 20th centuries, tens of thousands of Native children were removed from their homes and forced to attend residential boarding schools in an attempt to assimilate them into White American society. They were forbidden from speaking their languages and stripped of their cultures, and an initial investigation found that the deaths of at least 500 American Indian, Alaska Native, and Native Hawaiian children could be attributed to the boarding schools -- a number that is thought to be an underestimate.

As the residential schools fell out of favor, another policy aimed at assimilating Native Americans emerged. From 1958 to 1967, the federal government partnered with the Child Welfare League of America on the Indian Adoption Project, which placed hundreds of Native children in the homes of White families. It was billed as a progressive contrast to adoption practices at the time, which emphasized "matching" so that the child and adoptive parents appeared biologically related.

As many as one-third of Native children were removed from their homes in those years and placed with non-Native families, and congressional hearings on the issue revealed that ignorance and bias from child welfare workers contributed to their disproportionate removal.

"There was an erosion of language, culture, cohesion within the community, and an erosion of the civic life of tribal communities because we had federal and state-level policies that resulted in the dispossession of our children across Indian country," Cherokee Nation Principal Chief Chuck Hoskin Jr. told CNN.

Congress passed the Indian Child Welfare Act in 1978, determining that it was in the best interests of Native children to remain connected to their communities and that those children were key to the continued existence of tribes. In the decades since, the law has been heralded as the "gold standard" of child welfare policy.

"The best-interests-of-the-child standard is a holistic and individualized assessment that takes account of all of a child's circumstances and needs and prioritizes their well-being," Matthew McGill, a lawyer representing the non-Native adoptive families and a partner at Gibson Dunn, wrote in an email to CNN. "In the Supreme Court, the lawyer representing Indian tribes acknowledged that ICWA does not incorporate this familiar best-interests test."

But Kate Fort, director of the Indian Law Clinic at Michigan State University, said that courts must consider the child's best interests, which in this case happens to include a child's connection to their tribe, culture and community.

"ICWA doesn't supplant or erase the best interest of the child. It supplements it," she said.

When a Native child is placed in foster care, the arrangement is generally considered temporary, Fort said. The ultimate goal is to reunify that child with their parent, or when that isn't an option, to find the best adoptive home for them.

"When we're looking at a permanent placement, we're in a different calculus for the best interest of the child than we are in a foster care placement," Fort added. "We're trying to find what is going to be good for this child when she's seven, 16, 18 -- when she ages out potentially of a stranger foster care home. Generally speaking for all kids, we know it's with relatives and in their communities."

Still, there are exceptions to the preferences outlined in the Indian Child Welfare Act. As Rebecca Nagle noted in The Atlantic, non-Native foster parents were able to adopt Native children over a blood relative in two of the three underlying custody cases in Haaland v. Brackeen.

"These preferences are just that -- they're preferences," Reese said. "They still allow for the adoption of children by non-Indian families. The law itself is written to allow judges who are hearing cases involving the placement of Indian children to exercise their discretion about when it makes sense to depart from these placement preferences."

Some also say the law amounts to reverse racism

One of the plaintiffs' core arguments is that the Indian Child Welfare Act is racist.

In giving preferences to a child's relatives, members of their tribe and other Native families when placing a Native child for adoption, the law discriminates against non-Native adoptive parents, according to the plaintiffs.

While Native Americans are often considered to be a racial group, tribes are political entities and citizenship in a tribe is a political status. The Indian Child Welfare Act doesn't apply to any child with Native ancestry, but rather only to an "Indian child" -- a legal definition that refers to a child who is a member of a tribe or a child whose parent is a tribal member and who is eligible for membership.

Because of their unique political standing, tribes dispute the notion that the preferences outlined in the Indian Child Welfare Act amount to racial discrimination. The Supreme Court has agreed, holding in a 1974 case that such preferences weren't discriminatory but rather "reasonably designed to further the cause of Indian self-government."

The plaintiffs also assert that the law discriminates against Native children, stating in a court filing that it places them "in a disfavored position, depriving them of a placement decision based on their best interests, and instead requiring placements based on the child's "biolog[y]."

"In the United States, citizenship is based primarily on birth within the territory of the United States," McGill, the lawyer representing the plaintiffs, wrote in an email to CNN. "ICWA classifies children based on their ancestry, and children are powerless to change that."

But tribal citizenship isn't limited to ancestry, said Cherokee Nation Deputy Attorney General Chrissi Nimmo. Just as in the US, there are other ways of becoming a citizen beyond where a person is born. For example, the Cherokee Nation grants citizenship to the descendants of people once enslaved by the tribe, whether or not they have Cherokee ancestry.

But tribes see it as an attack on their sovereignty

For tribal nations, the Indian Child Welfare Act is about their future.

"There's nothing that is more central to core self-governance and sovereignty than having the next generation of citizens in your government," Nimmo said.

With this legal case, that future hangs in the balance. If the Supreme Court were to rule that tribes are racial groups rather than political entities and that the law is therefore unconstitutional, much of the legal basis for tribal sovereignty would be at risk, Reese said.

"If that is the case for the Indian Child Welfare Act, then there is little to say that that's not the case for tons of other statutes across the federal code," she said. "For example, [those codes] create health care for Indian persons under the Indian Health Service. Is that an impermissible racial discrimination? What about the holding of lands by the federal government in trust for specific Indian tribes?"

Another argument made by the plaintiffs -- particularly that the Indian Child Welfare Act is an overreach of Congress' powers regarding tribal affairs -- could have similarly wide-ranging implications if the Court were to agree, she added. It could call into question virtually all of Title 25 of the US Code, a section of the law that pertains to Indians and tribes.

"If that whole section is constitutionally suspect, that's a huge problem for tribes," she said.