Should the government control the price of food and gas? 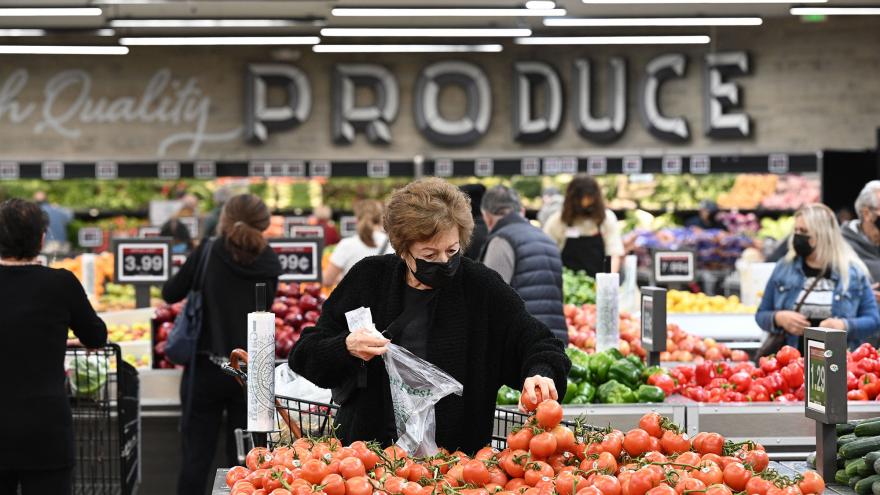 (CNN) -- People are paying a lot more for food, gas, cars and services, and inflation isn't over yet as the pandemic continues to distort the economy. So should governments consider setting the price of essential goods?

It's been done before, typically during times of crisis, but for most mainstream economists, the answer to this question is a resounding "no." Limiting how much companies can charge will distort markets, they argue, causing shortages and exacerbating supply chain problems while only temporarily reducing inflation.

"Price controls can of course control prices — but they're a terrible idea," David Autor, a professor of economics at the Massachusetts Institute of Technology, remarked in a survey published earlier this month by the University of Chicago.

Asked whether price controls similar to those used in the United States during the 1970s could reduce inflation over the next year, less than a quarter of economists surveyed said they agree while nearly 60% said they disagree or strongly disagree.

"Just stop. Seriously," Austan Goolsbee, a professor at the University of Chicago, said in response to the question. Goolsbee previously served as chairman of the Council of Economics Advisers under former President Barack Obama.

The attitude toward price controls appears to be similar in Washington, where policymakers have shown little enthusiasm for even targeted or temporary measures despite growing pressure on middle class families that feel the pain of price increasesmore than the rich.

Still, with annual inflation running at a four-decade high of 7% and midterm elections approaching, price controls could feature in future debates about how to reduce prices, particularly if actions taken this year by the Federal Reserve fail to tame inflation.

The problem with price controls

Price controls can be targeted or imposed on a broad range of goods, setting either a floor or ceiling. The German capital of Berlin, for example, has sought to limit how much rent landlords can charge tenants. In the United Kingdom, regulators limit how much consumers can be charged for energy and some types of rail fares.

Economists who are skeptical of price controls often point to basic economic concepts.

They argue that capping prices encourages companies to produce less of a product, while making it more attractive to consumers. Supply goes down, and demand goes up, with shortages being the inevitable result.

But that doesn't stop governments around the world from resorting to price controls when inflation gets out of hand. As elections approached late last year in Argentina and annual inflation topped 50%, the government froze the price of over 1,000 household goods.

Last week, Hungarian Prime Minister Viktor Orban said he would cut the price of flour, sugar, sunflower oil, milk, pork leg and chicken breast ahead of a national election in April, according to Reuters. He also extended caps on energy, fuel and mortgages.

Isabella Weber, an assistant professor of economics at the University of Massachusetts Amherst, argues that price controls have a role to play in the United States, too, as policymakers try to address inflation caused by the extraordinary circumstances of the pandemic.

"Price controls would buy time to deal with bottlenecks that will continue as long as the pandemic prevails," Weber wrote recently in The Guardian, adding that "the cost of waiting for inflation to go away is high." One key to making the policy a success, she wrote, is to remove price caps gradually to prevent a rapid surge in prices.

There is plenty of precedent for price controls in the United States, but you have to look a few decades back.

They were last deployed at the federal levelduringthe 1970s, when former President Richard Nixon established a Cost of Living Council in the summer of 1971 and blocked most wage and price increases for 90 days. The policy was popular with the American public, and inflation slowed temporarily after reaching 5.8% in 1970.

But Nixon's subsequent efforts to cap prices were much less successful. The Republican repeatedly tried to freeze pricesduring the next few years, but inflationsurged to 11% in 1974 —exacerbated by the Organization of the Petroleum Exporting Countries (OPEC) declaring an embargo on oil shipments to the United States the previous year.

Nixon had worked early in his career as an attorney for the Office of Price Administration, which was established during World War II to impose price ceilings on rents and a wide range of products. The price controls were largely effective, but gave rise to a thriving black market. The agency was dissolved in 1947.

Limited price controls are also present in the US economy today. Some cities cap rents or the amount landlords can hike them each year, while government agencies limit the price that some monopolistic utilities charge.

Modern politicians tend to put their faith in the Federal Reserve's ability to control inflation, but the central bank may struggle to address price hikes that are caused by supply chain issues resulting from the pandemic.

President Joe Biden has also taken some steps to combat rising prices by targeting corporations and using the power of his office. He has pledged to enforce antitrust laws and crack down on price fixing by meat processors, an industry that is controlled by just a handful of large firms. Biden has also released oil from the country's Strategic Petroleum Reserves in a bid to reduce energy prices. Meat and energy are both significant contributors to inflation.

Price controls, it seems, are still a bridge too far.