Single-use plastic is wreaking havoc on the planet. Here's what you can do to minimize your impact 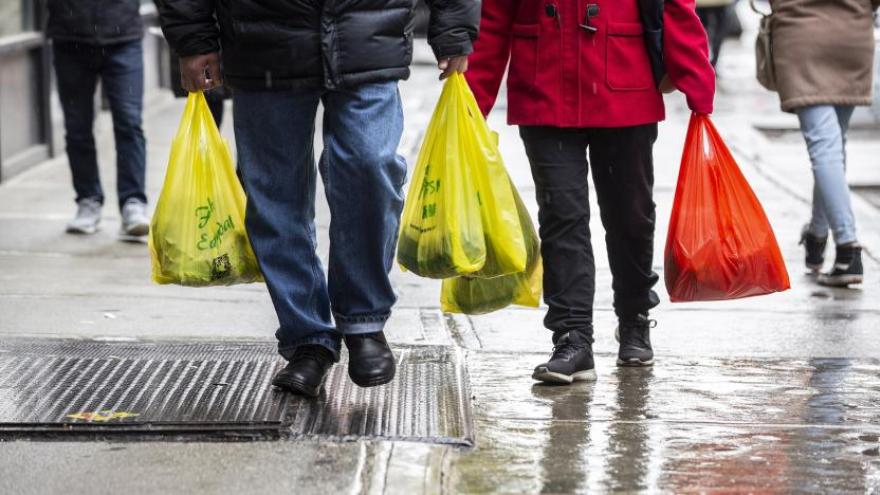 We can do our part to minimize our own plastic use, but the world needs big solutions for this big problem.

(CNN) -- The life cycle of plastic begins underground, where oil and gas are extracted from deep below the surface of the planet. These fossil fuels are then refined in facilities, using extreme temperatures and significant amount of water and energy, where they are transformed into pellets that are eventually melted and molded into things like water bottles, packaging, garbage bags and clothes.

And the widespread use of single-use plastic — the stuff we use once and then throw away — is only made worse by its disposal. Plastics do not break down once they're thrown into nature. And, alarmingly, only around 9% plastic in the US is actually recycled, according to the Environmental Protection Agency — even the stuff you specifically threw into the recycle bin.

What you might not realize is this isn't just a pollution problem. It's a climate problem. And by the time we start talking about recycling, the damage is already done.

The process of making plastic is so energy intensive that if the plastics industry were a country, it would be the fifth largest emitter of greenhouse gases in the world, according to a 2021 report from Beyond Plastics.

Plastics are the "new coal," said Judith Enck, a former Environmental Protection Agency regional administrator and now president of Beyond Plastics. Generating energy from coal — the most polluting fossil fuel — is already being phased out. But Enck said it's likely that plastics may be sticking for a while longer, unless consumers significant cut their plastic use.

From its production to its end-of-life, plastic belches greenhouse gas emissions at every stage of its life cycle. Here's why experts say the convenience of plastic comes at a terrible cost for the climate, and what you can do to help reduce its impact.

The plastic industry is responsible for at least 232 million tons of planet-warming emissions each year, according to the Beyond Plastics report.

"Remember that when you're making plastic, there's the greenhouse gas emissions, but these facilities also emit massive amounts of air toxins and particulates," Enck added. "It's really a health threat."

"If you look at where more than 90% of the climate pollution is released by the plastic industry, it's in 18 communities in the whole country, and they're all low-income communities and the residents are more likely to be people of color," Enck said, outlining other findings in the report. "Plastic production is an environmental justice issue."

And plastic recycling doesn't work, Enck said, because most of what we think we're recycling just ends up in the landfill. It also doesn't address the planet-warming emissions that comes from making it in the first place.

Jacqueline Savitz, chief policy officer for Oceana in North America, said people should think of the plastic crisis as an overflowing bathtub.

"When the bathtub is overflowing, you don't want to just run for the mop; first, you want to turn off the faucet," Savitz said. "Recycling is the mop. You're not going to get very far, if the faucet is still on. So what we have to do is reduce the amount of plastics that we're producing at the source, and that's turning off the faucet."

What you can do about it

Recycling alone will not solve this massive problem, Enck said, but we should still do it — bearing in mind what can and cannot be recycled.

The number system on the bottom of plastic items are not a guarantee they will be recycled. Only things marked 1 and 2 — and on rare occasion, 5 — are sure bets, depending on what your municipality can handle.

This is why it's so important to focus on reducing plastic use in the first place, Enck said, and our individual changes can add up.

"It's just not going to solve the problem unless we change the law," Enck said. "But with individual actions, what I urge people to do is look at their own home or their worksite — what is your heaviest use of plastic?"

You won't know what you can change until you take stock. Make note of all of the plastics in your home. Most of the single-use stuff you'll find around the kitchen and the bathroom. Then, armed with a list of where you use single-use plastic the most, you can start to make replacements.

Here are some examples:

Say no to bottled water — Get a couple of canteens and cut a major source of plastic out of your life.

Reusable grocery bags — You can easily go a step further by not using the plastic produce bags the store provides for your apples and broccoli. If you're uncomfortable putting produce directly in the cart, have a special bag to carry it in until you get to the checkout. There's no rule that says you have to wrap your fruits and veggies at the store.

Choose paper (or no) packaging over plastic — If you're looking at two versions of the same product and one is packaged in paper or cardboard and the other is in plastic, then the choice is obvious. And look for plastic-free options like bar shampoo.

Buy in bulk to reduce plastic waste — Nuts, rice and beans are all things that come in plastic bags, but they don't need to. Bring your own reusable containers to fill with your favorite bulk foods. (Just make sure to zero-out the scale before you start filling them, so you don't pay for the weight of your container.)

Refuse plastic cutlery — Take your own utensils to restaurants that typically provide plastics. Or, if you're ordering takeout, tell the restaurant they don't need to add it to your bag.

And Enck's group has more suggestions for how to cut your personal plastic use.

Ultimately, the world needs large-scale change to address the climate impact of the fossil fuel and plastics industries, Savitz said. Oceana, for example, is working with local volunteers from cities and counties around the country to help pass new laws to reduce single-use plastics, in hopes of sparking change at the national level.

"We think that if we could start to reduce single-use plastics at the local level with local ordinances, that can start to become more of the norm," she said. "Then we can start taking it to higher levels of government, even getting to the point of getting national policies that will drive reductions in plastic use."

Ultimately, Savitz said consumers need to continue urging major corporations to provide plastic-free solutions and help support refill and reuse programs to encourage society to shy away from plastic use and stave off the worst impacts of the climate crisis.

"Our country is burning and flooding and hurricanes are coming earlier and earlier," she told CNN. "I really think it's shocking that one of the things that's really leading to that is plastics, and it's hurting us in other ways, too. So if we could find a way to reduce our production of plastics as a country and as a global society, we'd be taking a bite out of climate change."