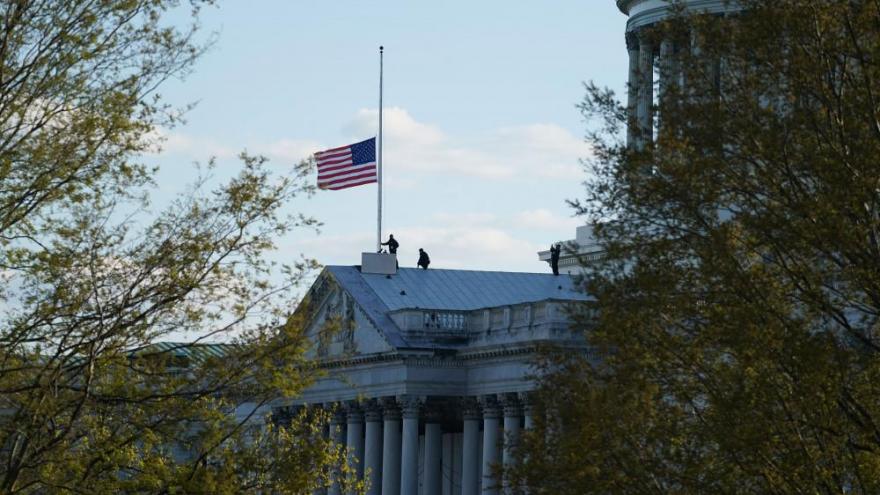 House Speaker Nancy Pelosi and Senate Majority Leader Chuck Schumer announced on April 6 that fallen Capitol Police Officer William "Billy" Evans, who was killed as the result of an attack on the Capitol last week, will lie in honor in the Capitol Rotunda.

(CNN) -- House Speaker Nancy Pelosi and Senate Majority Leader Chuck Schumer announced on Tuesday that fallen Capitol Police Officer William "Billy" Evans, who was killed as the result of an attack on the Capitol last week, will lie in honor in the Capitol Rotunda.

Evans, an 18-year veteran of the Capitol Police, died while protecting the Capitol from an individual who brandished a knife after ramming his vehicle into a police barricade along the perimeter of the Capitol. Another officer was injured in the attack.

"The United States Congress joins all Americans in mourning the tragic death of one of our Capitol Police heroes, Officer Billy Evans," Pelosi and Schumer said in a joint statement. "In giving his life to protect our Capitol and our Country, Officer Evans became a martyr for our democracy. On behalf of the entire Congress, we are profoundly grateful."

"It is now the great and solemn privilege of the House of Representatives and the Senate to convey the appreciation and the sadness of the Congress and Country for the heroic sacrifice of Officer Evans with a lying-in-honor ceremony in the US Capitol," Pelosi and Schumer said in their statement.

Evans' family released a statement Tuesday thanking the Capitol Police Department and the law enforcement community in general for their support "in the darkest moment of our lives."

"Billy was proud to be a United States Capitol Police Officer," his family said in the statement. "His colleagues from the North Barricade were the people he spent so many hours with, and their friendship was one of the best parts of his job. We hold them in our hearts, as we know they acutely share our grief."

Acting US Capitol Police Chief Yogananda D. Pittman reflected on the day of Evans' death how difficult a time it has been for the Capitol Police force, who remain understaffed and overworked since the violent insurrection on the Capitol on January 6.

Meanwhile, the other US Capitol officer who sprang into action to take down the man who drove through the barricade, a suspect whom officials have identified as Noah Green, has been placed on paid administrative leave, according to a US Capitol spokesperson. The unidentified officer opened fire on the knife-wielding Green after he struck Evans and another unidentified officer, according to a report from the Metropolitan Police Department.

"The officer is on paid administrative leave pending the outcome of the investigation, which is standard for any officer involved shooting," the spokesperson told CNN on Tuesday.

Green died from his injuries at a nearby hospital, police said in a news release on Monday.

Capitol Police Union Chairman Gus Papathanasiou said in a statement Saturday that the Capitol Police is staffed below its authorized level by 233 officers and could face larger staffing shortages as officers retire in the coming years. Papathanasiou noted the shortage is exacerbated by the continued injuries of several officers in the January 6 attack.

Evans is the second Capitol Police officer to die in the line of study this year. Capitol Police Officer, Brian D. Sicknick, died a day after the Capitol riot on January 6 "due to injuries sustained while on-duty," the Capitol Police said in a statement. Two officers also died by suicide after responding to the riot.