Spotted lanternflies are thriving in the Northeast. Scientists fear they could spread farther 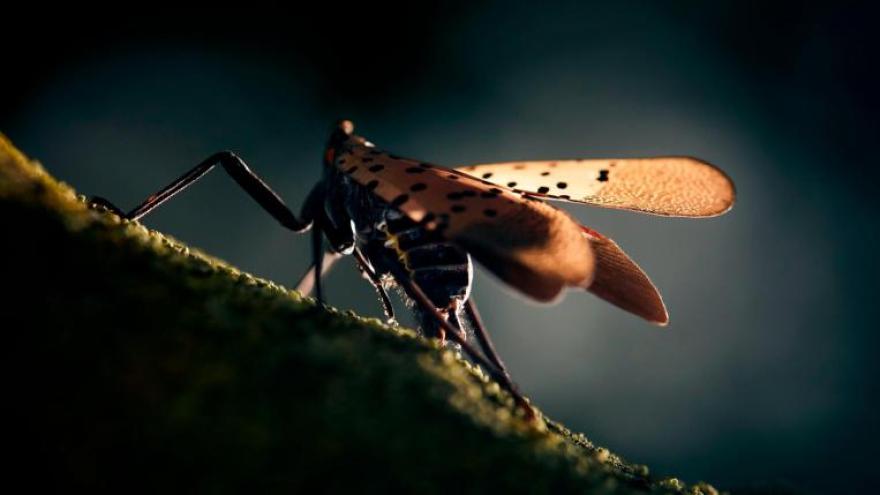 A spotted lanternfly sits on a tree limb. A droplet of sap can be seen glistening at the end of its long piercing mouthpart it uses to feed on the sap of a tree.

(CNN) -- Spotted lanternflies are thriving in the Northeast this summer. In New York City, where this year's invasion seems particularly extreme, people squash them on the streets, on railings and even on their restaurant tables. The exterior walls of Big Apple buildings are blanketed with speckled, red bugs.

Some are dead. Some are twitching. Many are still very much alive.

The good news is the invasive fly does not sting or bite humans. But they do tremendous harm to plants and trees. According to the US Department of Agriculture, spotted lanternflies feed on the sap of food crops such as grapes, apples and peaches, and trees like maple, timber and walnut.

The insects, native to Southeast Asia, are spreading so fast in the United States experts say it has become challenging to control and manage them. And the experts are sending a clear message: If you see it, squash it.

As temperatures get warmer because of the climate crisis and the growing season gets longer, the lanternflies could be here to stay, and they are spreading to new areas.

"It's a very distinctive and characteristic bug, and it is establishing in more places," Julie Urban, research associate professor of entomology at Pennsylvania State University, told CNN. "It's possible that if your plants are around longer, lanternflies in warmer areas could persist longer and maybe lay an additional clutch," or egg mass.

Spotted lanternflies prefer warm climates, so as temperatures rise in the northern states, the bugs' range could only expand. Moreover, with colder temperatures, "it typically takes not just the first hard freeze, but a couple of hard freezes to kill them, and so cold snaps certainly aren't going to knock back the population," Urban added.

Eshenaur said he and other researchers believe the insect first arrived in the US in 2014, having stowed away on a shipment of landscape stone from South Korea, where the species is also invasive. The first known infestation broke out in Berks County, Pennsylvania, where the bugs fed in a wooded area filled with an invasive tree species called the Tree of Heaven.

Report spotted lanternflies: In New York | In other states

"It can lay eggs there and then in the spring, those eggs hatch and if there are suitable plants in the landscape, they can take up shop in their new location," he said. "It appears that's what they did."

In the years since, spotted lanternflies have spread nearly everywhere in the Northeast, from Pennsylvania to Vermont, and now New York City. At first, Eshenaur told people to watch out for egg masses on firewood, but now he warns the bugs can lay eggs on almost anything.

"Now we've seen egg masses being laid on camp chairs, lawn furniture that's left outside and even like a hat somebody left out during the egg laying season," he said. "We actually just had our first confirmation of egg mass being laid in New York's Hudson Valley, but we're certain that it's probably occurring throughout New York City."

And across the Northeast, particularly in Long Island and the Finger Lakes, experts say the spread of the species is threatening wine.

"The vineyard managers have been looking to control insects that might feed on the foliage or on the clusters of grapes themselves," Eshenaur said. "One grower lost about 35 acres, and they stopped planting vines there for a while and were wondering if they could even have vineyards."

Spotted lanternflies feed on the sap in plants, which it gets at by puncturing trunks and branches. Punctures weaken the plants, but most of the damage comes from the honeydew falling onto the leaves and fruit. And if unchecked, the plants, particularly grapes, develop a black mold and eventually wither.

Part of why it has been hard to manage lanternflies in a place like New York City, according to Urban, is because they thrive in so-called disturbed areas. For example, the bugs are very fond of the invasive Tree of Heaven, which can grow through the cracks of sidewalks and rooftops common across the city. They also make camp on plants along roadsides or railroad lines.

"How climate change comes into this whole story is where you find lantern flies — and how it's able to really get established," Urban said. "Climate change is also a story about disturbance, and so it's more that overall disturbance that adds additional noise and is what makes these insects problematic."

Spotted lanternflies have been spotted as far south as North Carolina, and many experts fear it could spread to the West, where much of the country's food is grown. A study in 2019 showed the lanternfly's potential habitat could stretch throughout the Midwest and into the Southeast, and, concerningly, there is a high potential for the bug to set up shop on the West Coast.

Lisa Neven, a research entomologist with the US Department of Agriculture and co-author of the study, told CNN if the spotted lanternfly spreads to the coast, it could have an enormous effect on the region's agricultural industry and food production.

"People are very, very aware of this pest and are on the lookout, especially out here in the Pacific Northwest," Neven said. "We're very concerned about it, because of the crops that we grow."

As researchers look for more long-term solutions amid the rapid rate at which the climate crisis is shifting temperatures, Urban and Eshenaur urge people to report and crush spotted lantern flies when they can, so they do not spread to vital ecosystems in the rest of the country.

"If you don't stop it, you'll spread it," Urban said. "Longer term, research-based solutions are coming. We just need help in buying time."