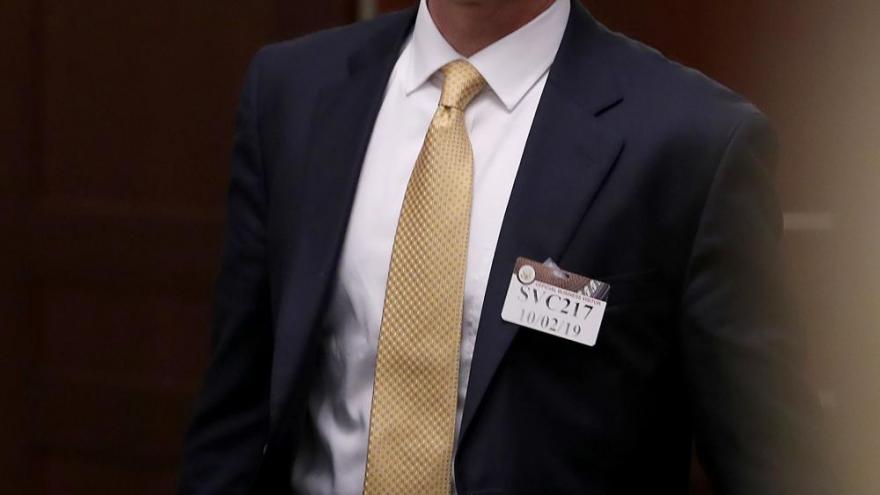 (CNN) -- President Donald Trump on Friday fired State Department Inspector General Steve Linick, the latest in a series of dismissals of independent government watchdogs that have come in the wake of the President's acquittal on articles of impeachment earlier this year.

Trump announced his intent to remove Linick on Friday, yet another late-night firing of an inspector general as the media's attention was focused on the coronavirus pandemic that has claimed the lives of more than 87,000 Americans. The dismissal drew immediate condemnation from top Democrats who accused the President of engaging in a pattern of retaliation against public servants charged with oversight of his administration.

"It is vital that I have the fullest confidence in the appointees serving as Inspectors General. That is no longer the case with regard to this Inspector General," Trump said in a letter sent late Friday to House Speaker Nancy Pelosi.

The letter states that Linick's firing, first reported by Politico, will take effect in 30 days unless members of Congress intervene to pressure or convince the President to reverse course.

But the chances of that happening appear slim given the fact that Trump has now fired multiple inspectors general following his Senate acquittal in early February, including the late-Friday dismissal of the intelligence community watchdog Michael Atkinson, who told Congress about the whistleblower complaint that kick-started the impeachment process.

CNN has also previously reported that the President has long been fixated on ridding his administration of government watchdogs he views as Obama loyalists and now appears to be working toward achieving that goal.

Not long after Linick's firing was announced, the chairman of the House Foreign Affairs Committee said Linick had opened an investigation into Secretary of State Mike Pompeo.

"I have learned that the Office of the Inspector General had opened an investigation into Secretary Pompeo," Democratic Rep. Eliot Engel said in his statement denouncing the firing. Engel did not provide any further details about the scope of this investigation or how he learned about it.

A State Department source confirmed Saturday that there is an investigation into the alleged improper use by Pompeo of a political appointee, but the source was unsure when the investigation began.

Sarah Breen, the State Department's Office of Inspector General director of communications, told CNN in an email, "We cannot confirm or deny the existence of any specific investigation."

The inspector general investigation Engel referenced centers around possible misuse of a political appointee at the State Department to perform personal tasks for Pompeo and his wife, a Democratic congressional aide with knowledge of the investigation told CNN.

A source close to Linick told CNN the allegation raised by the Democratic aide had previously been brought to Linick's office but was not aware of an official investigation being opened into the matter.

A senior State Department official confirmed that Pompeo made the recommendation that Linick be removed, but the official did not know the reasons why.

Engel's revelation of an investigation into Pompeo opened by Linick shows the seriousness of a surprising move that mirrors the Friday dismissal of Atkinson last month.

The firing comes as Trump continues his attacks on internal government oversight. The President has shown repeated hostility to any independent scrutiny from within the government, often targeting officials he sees as holdovers from President Barack Obama's administration or part of the so-called "deep state," which he believes is aligned against him.

Linick, who was first appointed as an inspector general by Obama, had a small role in the impeachment inquiry.

Linick gave a private briefing to bipartisan staff from eight House and Senate committees and gave them documents that the State Department had received from Trump's private attorney Rudy Giuliani. The documents included unfounded allegations of wrongdoing against Biden and former US Ambassador to Ukraine Marie Yovanovitch. By doing this, he broke ranks with State Department leadership who vowed not to cooperate with the investigation.

A State Department spokesperson confirmed Linick's dismissal and said that Ambassador Stephen Akard, an ally of Vice President Mike Pence, will take on the role. Akard's ties to Pence, which date back to when he worked under then-Indiana Gov. Pence as the head of the Indiana Economic Development Corporation, have previously rankled former diplomats who see him as a part of the politicization of the State Department.

"On September 11, 2019, Ambassador Akard was confirmed by the Senate, 90-2, to lead the Department's Office of Foreign Missions and we look forward to him leading the Office of the Inspector General," a State Department spokesperson said. Akard is a former career Foreign Service Officer who served as a special assistant in the Executive Secretariat, as a political officer and general officer at Embassy Brussels, and served as a consular officer at the US Consulate General in Mumbai.

The decision to choose Akard as his successor was done in consultation with his management team, but Pompeo ultimately made the decision, the official said.

"This is scary and completely unexpected," a separate State Department source close to Linick told CNN.

This source didn't know of anything that seemed to trigger this beyond Trump's general ire with what he deems to be the "deep state."

A different source said senior staff in the State Department Inspector General's office were blindsided. Akard has been named under the vacancies act to bypass Linick's deputy, Diana Shaw, who just assumed the role this month after having shifted from the Department of Homeland Security's Inspector General's office. CBS first reported Pompeo's role.

"If Inspector General Linick was fired because he was conducting an investigation of conduct by Secretary Pompeo, the Senate cannot let this stand," Murphy said on Twitter, referring to Engel's statement. "The Senate Foreign Relations Committee must get to bottom of what happened here."

Linick began his job in September 2013. He previously was a Justice Department prosecutor and worked as a top Department of Justice fraud official. He also served as the first Inspector General of the Federal Housing Finance Agency.

At the State Department, Linick oversaw the investigation into former Secretary of State Hillary Clinton's use of a private email server. His May 2016 report on the probe was critical of Clinton, saying the former secretary failed to follow the rules or inform key department staff regarding her use of the private server.

He was also an assistant US attorney in California and Virginia. Linick served as executive director of the Department of Justice's National Procurement Fraud Task Force as well as deputy chief of the fraud section in the Department ogf Justice's Criminal Division from 2006 to 2010.

"During his tenure at the Department of Justice, he supervised and participated in white-collar criminal fraud cases involving, among other things, corruption and contract fraud against the U.S. in Iraq and Afghanistan," according to his State Department biography.

He has also issued two damning reports about the State Department during Trump's administration. One report released in August 2019 found that top officials in the State Department's Bureau of International Organization Affairs subjected employees to "disrespectful and hostile treatment," accusations of disloyalty, and retaliation. Another report released in November 2019 that found that high-ranking Trump administration political appointees within the State Department improperly retaliated against a career civil servant during Rex Tillerson's tenure as secretary of state.

House Speaker Nancy Pelosi called the "late-night, weekend firing" of Linick an "acceleration of the President's dangerous pattern of retaliation against the patriotic public servants charged with conducting oversight on behalf of the American people."

Pelosi added that the firing will "set back the important work of the Office of the Inspector General to perform critical audits, investigations and inspections of U.S. embassies and programs around the world" during the coronavirus crisis.

Sen. Robert Menendez, the New Jersey Democrat who is the ranking member on the Foreign Relations Committee, called the firing "shameful" in a tweet on Friday night.

Menendez and Engel announced on Saturday that they have launched a probe into the firing, requesting the Trump administration preserve any documents related to the firing and that information be turned over to Congress by May 22.

Republican Sen. Chuck Grassley of Iowa, a longtime proponent of inspectors general, issued a statement on the firing on Saturday while most of his GOP colleagues have so far been silent.

He told CNN's Manu Raju on May 4 he did not think more legislation was necessary to protect IGs, saying: "I think we have plenty of laws to protect inspectors general."

"The firings of multiple Inspectors General is unprecedented; doing so without good cause chills the independence essential to their purpose. It is a threat to accountable democracy and a fissure in the constitutional balance of power," the Utah Republican tweeted.

Trump has now fired multiple inspectors general in the wake of the Senate acquitting him on two articles of impeachment in early February, as the nation's attention was on fighting coronavirus. The President, CNN previously reported, has been fixated on ridding his administration of government watchdogs he views as Obama loyalists.

In early April, Trump fired the intelligence community inspector general, Atkinson, who had told Congress about the whistleblower complaint that led to Trump's impeachment.

Within a week, Trump removed the acting inspector general for the Defense Department, Glenn Fine, from his post. Fine's removal from the top job made him no longer eligible to chair an accountability committee tasked with overseeing coronavirus emergency funds.

Trump also publicly attacked the top official at the Department of Health and Human Services' inspector general's office over a report on hospitals facing supply shortages.

Rep. Gerry Connolly, a Democrat from Virginia, condemned the series of dismissals on Friday.

"The firing of IGs (the fourth) is meant to intimidate and silence those who wish to hold corruption accountable," Connolly said on Twitter. "It's an attack on our democracy and should trouble all members of Congress. The GOP silence on this is a dereliction of duty."

This story has been updated with additional reporting and background information on Linick.