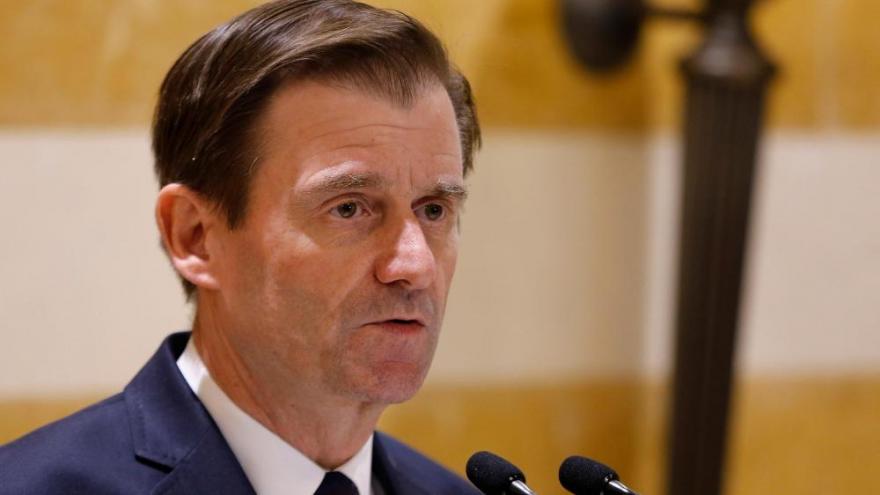 In this January 14, 2019, file photo, US Undersecretary of State for Political Affairs David Hale delivers a statement after meeting with Lebanese Prime Minister-designate Saad Hariri in Beirut, Lebanon.

(CNN) -- David Hale, a high-ranking official in the State Department, is one of several administration officials set to testify Wednesday in the second week of public hearings in the impeachment inquiry into President Donald Trump and Ukraine.

Hale told House impeachment investigators during his closed-door deposition earlier this month he never heard about investigations into Ukrainian natural gas company Burisma, the Bidens, or the 2016 election, "through government channels," according to a transcript of his testimony that was released Monday night. He also said he was not aware of what was being pursued in Ukraine and said he was surprised when he learned about it in the wake of the release of the call transcript between Trump and Ukrainian President Volodymyr Zelensky.

"It was not something that was apparent to me," Hale, who was appointed the under secretary of state for political affairs by Trump in 2018, said.

Hale's testimony included new details, including confirmation that Secretary of State Mike Pompeo spoke to both Giuliani and Fox News' Sean Hannity about the attacks on former US Ambassador to Ukraine Marie Yovanovitch.

His path to foreign affairs began with his grandparents

A native of Bridgewater, New Jersey, Hale graduated from Bridgewater-Raritan East High School. He then graduated from Georgetown University's School of Foreign Service and joined the foreign service in 1984. He has a rank of career ambassador.

In his opening statement submitted to the Senate Foreign Relations Committee for his confirmation hearing in 2018, he said his "call to public service" started with his grandparents Joseph and Elizabeth Kler, who were world travelers. His grandfather was the first staff physician and first team physician for Rutgers University in 1929. Joseph Kler also founded the infirmary at the university in 1931, according to The New York Times.

"He opened up my eyes to the world beyond Bridgewater," Hale said about his grandfather in a 2018 interview with My Central Jersey.

He has extensive experience in foreign affairs

Hale was executive assistant to then-Secretary of State Madeleine Albright during the Clinton administration. He was director for Israel-Palestinian affairs from 2001 to 2003. He became ambassador to Jordan in 2005. In 2008, he became deputy assistant secretary of state for Israel, Egypt and the Levant. He was deputy special envoy in 2009 and special envoy for Middle East peace from 2011 to 2013. He was US ambassador to Lebanon from 2013 until 2015, when he became ambassador to Pakistan.

He has received numerous awards, including a Presidential Rank Award of Meritorious Service in 2012. In 2013, then-Secretary of State Hillary Clinton gave him the Distinguished Service Award, according to an archived State Department website.

He said in his 2018 opening statement that his mentors include Albright and the late Ambassador Armin Meyer.