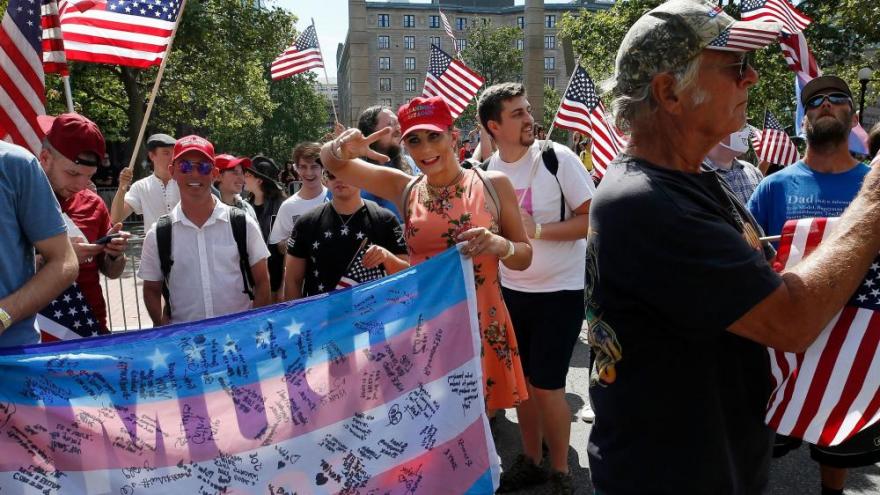 A large number of counterprotesters taunted marchers Saturday and chanted "Alt right, get off our streets, no justice, no peace." Counterprotesters outnumbered the parade participants, CNN affiliate WCVB reported. Boston's mayor also condemned the parade, and encouraged residents to attend block parties and other events that celebrated the city.

The parade started around noon at Copley Square and moved down Boylston and Tremont streets, ending at City Hall Plaza.

Floats and signs expressed pro-military and pro-Trump sentiments, such as "Support our troops" and "Build the wall and crime will fall." A man in a jester's hat carried a sign saying "Great to be straight" as he danced down the street.

"I'm outraged by the idea that straight people need a pride parade," said parade watcher Shoshanna Ehrlich, who came with her daughter. "We are not an oppressed majority by an stretch of the imagination. This is full of hate and offensive."

Monica Cannon-Grant of Black Lives Matter Cambridge helped organize one of the counterprotests and said her group wanted to "stand up against hatred."

"I feel like they capitalized on Boston Pride, which is our LGBTQ celebration. They used it as their next thing to hate on," she told CNN in an interview.

"We chanted against hatred and we won," added Cannon-Grant, founder and CEO of Violence in Boston, a victim advocacy group.

Nine people were transported to area hospitals, Boston EMS spokeswoman Caitlin McLaughlin said. She could not provide information on their conditions.

The parade was organized by Super Happy Fun America, which says it "advocates on behalf of the straight community in order to build respect. ..."

"The Straight Pride Event will be held to achieve inclusivity and spread awareness of issues impacting straights in Greater Boston and beyond," the group's website said.

Milo Yiannopoulos, a right-wing political commentator and writer, was the grand marshal.

In a tweet, Boston Mayor Marty Walsh he would be celebrating "what makes our city so great -- our people -- by attending neighborhood block parties, visiting farmer's markets and BBQs, and celebrating safe neighborhoods."

CORRECTION: This story has been updated to correct the name of counterprotest organizer Monica Cannon-Grant.