Subaru is recalling nearly 500,000 vehicles because the airbags could explode 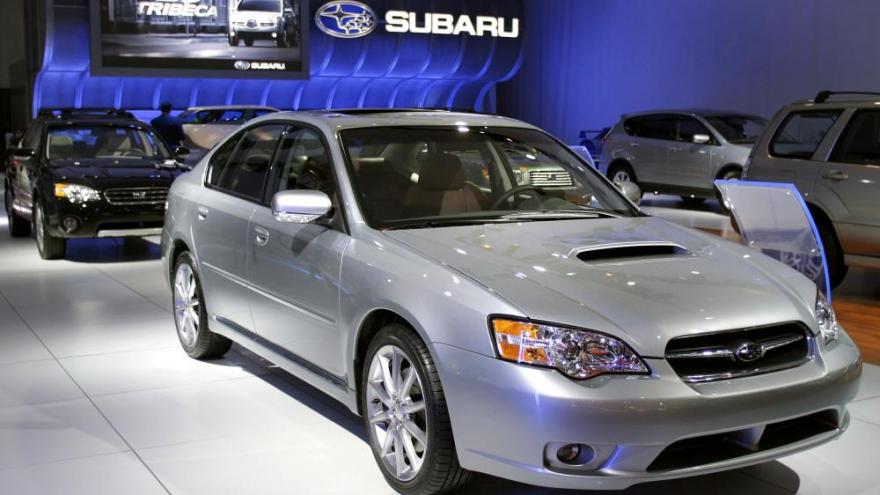 Subaru is recalling nearly 500,000 cars for faulty airbags that could explode and shoot metal projectiles throughout the vehicle.

(CNN) -- Subaru is recalling nearly 500,000 cars for faulty airbags that could explode and shoot metal projectiles throughout the vehicle.

The recalls apply to a number of Subaru models released between 2003 and 2014 that have Takata airbags in the front passenger seat. These can explode when deployed and send sharp metal fragments flying, which could seriously injure or kill the driver or passengers.

The driver's seat front airbag is not in danger of explosion, Subaru said.

The same crop of cars were recalled in 2015 for the same reason, though their airbag inflators were replaced with the same defective Takata design then, the National Highway Traffic Safety Administration (NHTSA) said.

The inflators could explode when the propellant that triggers the airbags degrades after many years of exposure to "high absolute humidity" -- the amount of water vapor in an air sample -- high temperatures and toggling between extreme heat and extreme cold, the NHTSA said.

The recall applies to those models sold or registered in all 50 states and Washington, plus Puerto Rico, Guam, American Samoa, the Northern Mariana Islands and the US Virgin Islands, the NHTSA said.

Subaru should notify all owners whose cars are affected by the recall. Local Subaru dealerships will replace all passenger air bag inflators for free with an appointment, and the repair should take about three hours, the company said.

Owners can also contact the Subaru recall team at 888-575-1382 or look up their vehicle identification number (VIN) with NHTSA to check whether their vehicle is subject to recall.

Parts are available for repairs now, but this could change due to the number of vehicles affected. Subaru warned passengers not to ride in the front passenger seat of affected vehicles until they're repaired.