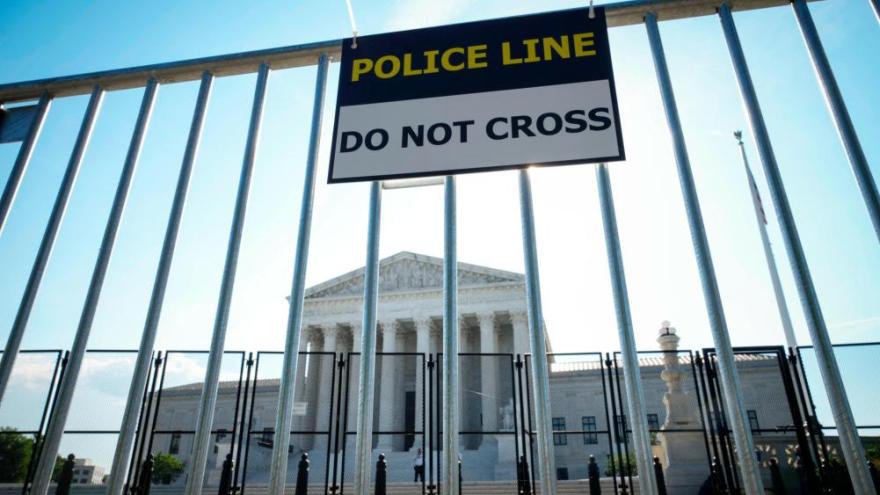 (CNN) -- The Supreme Court's stunning report Thursday on its failure to discover who leaked a draft decision reversing abortion rights last year laid bare shortfalls at the nation's highest court, in its technology, protocols for confidentiality and overall institutional safeguards.

Further, the lack of success in discovering who was responsible raises the possibility of a security breach in the future. It already appears likely to add to the public's distrust of the justices and accelerate the partisan rancor surrounding the court.

The justices' two-page statement and 20-page report from Supreme Court Marshal Gail Curley appear intended to demonstrate the thoroughness of the investigation, with numbers of people interviewed (126 formal interviews of 97 employees) and various forensic measures taken.

Yet each page rings with limitations and dead ends. It also suggests certain boundaries on who was investigated, referring only to employee scrutiny. There was no mention of possible interviews with the nine individual justices or their spouses.

On Friday, Curley put out a statement saying she had spoken to the justices but suggesting that it was in a less formal process than her interviews with employees. She said she did not ask the justices to sign sworn affidavits, as she had asked their law clerks, and that none of the leads she pursued implicated the justices or their spouses.

Overall, it is paradoxical that an institution that cloaks itself in secrecy and casts itself above other Washington institutions would be exposed as such a sieve.

The report expresses outright how easily confidential information could have slipped out, whether deliberately or accidentally. About 100 people had access to the draft at the outset, according to the details of the report. Many employees, the report said, "printed out more than one copy."

In a momentous case involving a half century of precedent protecting women's privacy rights, routine office precautions were absent. And when the breach was discovered -- a breach that the court itself deemed "a grave assault" -- it was all but impossible to re-trace internal operations.

Although the report effectively clears the law clerks who serve the justices for one-year terms, it noted that some of them admitted to telling their spouses about the opinion and vote count, in violation of the clerks' code of conduct.

In the days immediately after Politico published the draft, some conservative activists had accused liberal clerks of the disclosure. Liberal advocates, meanwhile, targeted the court's conservatives who might have been trying cement the 5-4 split to overturn Roe v. Wade. The partisan acrimony only increased once the decision upending reproductive rights nationwide was issued.

Thursday's inconclusive report did little to ease such tensions and instead spurred questions about how seriously the court sought out those responsible for the leak.

Outside critics had predicted that it would be difficult to determine who leaked the draft to Politico, which published the document on May 2, believing that whoever was responsible would not have left a trail.

But now that the court has laid out its operations, it appears it might have been quite simple to avoid detection.

Computer and printing technology was not secure. Officials could not determine conclusively whether copies of the draft decision in Dobbs v. Jackson Women's Health Organization had been surreptitiously copied or emailed to unauthorized devices.

"(F)or some networked printers there was very little logging capability at the time, so it is likely that many print jobs were simply not captured," the report stated. Investigators also found that printers used by the justices' staff were only locally connected, rather than connected to a larger network that could track printing activity.

The report acknowledged that no written policy existed on how to safeguard or dispose of draft opinions and other sensitive documents.

"The pandemic and resulting expansion of the ability to work from home, as well as gaps in the Court's security policies," Curley wrote, "created an environment where it was too easy to remove sensitive information from the building and the Court's IT networks, increasing the risk of both deliberate and accidental disclosures of Court-sensitive information."

No answers, but lots of recommendations

The report, nearly nine months in the making, belied the suspense generated by Chief Justice John Roberts' launch of the investigation. In his May 3 statement, he referred to a "betrayal of the confidences of the Court ... intended to undermine the integrity of our operations."

The report came with a seal of approval from an outside firm, the Chertoff Group, hired to review Curley's investigation. Michael Chertoff, a former judge and secretary of Homeland Security who now runs a private firm, wrote that Curley and her investigators had undertaken a "thorough investigation within their legal authorities."

In his one-page statement attached to the justices' materials for public distribution, Chertoff made specific recommendations, all of which appeared fairly basic for any operation handling legal documents, if not the country's top judicial officers: restrict the distribution of paper copies of sensitive documents; restrict the email distribution of such documents; adopt tools to better control how such documents are edited and shared; and limit the access of sensitive information on outside mobile devices.

Curley had noted that no evidence emerged showing that anyone emailed the draft opinion outside, "although technical limitations in the Court's computer recordkeeping at the time made it impossible to rule out this possibility entirely." She said she also could not eliminate the possibility that someone had downloaded the opinion to a removable device.

CNN had reported last summer that Curley was collecting cell phones and other devices from clerks and permanent employees. "To date," she wrote in the report, "the investigators have found no relevant information from these devices." Interviews and signed affidavits also yielded no answers.

Curley, who said that new security measures were being implemented, was candid about how few conclusions her team could reach, adding that the draft opinion could have been inadvertently left in a public place. Yet, she added, regarding any employee who acted intentionally, "that person was able to act with impunity because of inadequate security with respect to the movement of hard copy documents from the Court to home, the absence of mechanisms to track print jobs on Court printers and copiers, and other gaps in securities or policies."

That reality puts a bureaucratic stamp on what has been regarded as the court's most serious breach ever.

Roberts had vowed back in May that the disclosure would not affect the justices' work. He declared then that the draft "does not represent a decision by the Court or the final position of any member on the issues in the case."

But it did -- despite Roberts' own efforts to try to change the outcome.

The final opinion, issued on June 24, differed little from the draft opinion reversing Roe v. Wade, a 1973 decision that first gave woman a constitutional right to end a pregnancy. Justice Samuel Alito, who wrote the new opinion, was joined by four fellow conservatives.

Even after the leak, CNN had learned, Roberts tried to persuade one of the five justices in the majority to break away and prevent the reversal of nearly a half century of abortion rights. The chief justice voted to uphold a disputed Mississippi law that banned abortion at 15 weeks of pregnancy, but he did not want to use the case to obliterate abortion rights at earlier stages of pregnancy.

None of the five on the right might ever have wavered in their votes, but CNN learned through sources at the time that the leaked decision made Roberts' negotiating efforts all the more difficult.

Determining how the leak changed the course of history may be impossible. But Thursday's report, revealing the loose handling of confidential documents, suggests the leak itself need not have been inevitable.