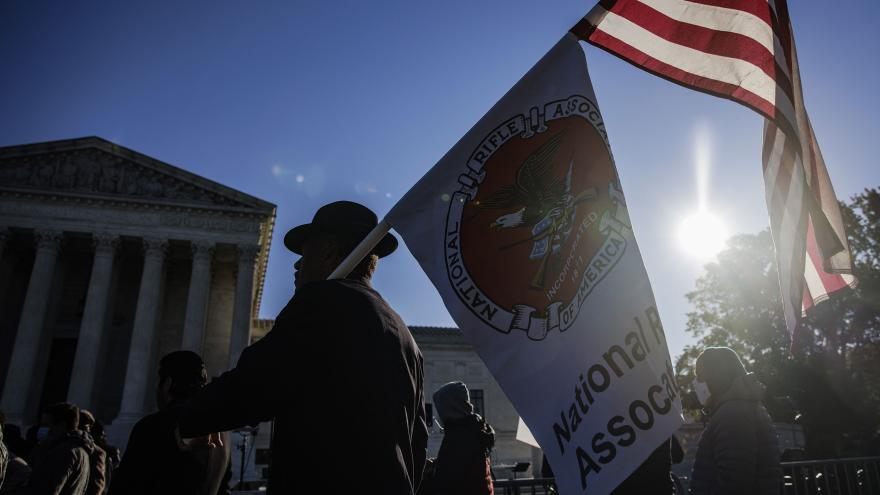 (CNN) -- While the Supreme Court has been working behind closed doors on its first major Second Amendment opinion in more than a decade, three mass shootings have broken the country, including Tuesday's massacre of 19 schoolchildren in Texas.

Closed off from public view, the justices are penning opinions and dissents in a dispute that targets one concealed carry law in New York that is more than a century old. A narrow ruling could impact only a handful of states with similar laws, but a more expansive ruling could open a new chapter in constitutional challenges to gun safety laws across the country.

"But a broader ruling that changes the way courts evaluate gun laws could call into question a wider array of gun regulations like assault weapons bans and other restrictions like high-capacity magazine bans," Charles added.

The deliberations come as the country mourns another tragedy, victims of gun violence plea for more action, and the political branches seem forever divided on a path forward.

In 2008, the Supreme Court held for the first time, that the Second Amendment protects an individual's right to keep and bear arms at home for self-defense.

After the ruling, however, to the frustration of gun rights advocates, lower courts relied upon language in the opinion to uphold many gun regulations.

"Nothing in our opinion should be taken to cast doubt on longstanding prohibitions on the possession of firearms by felons and the mentally ill, or laws forbidding the carrying of firearms in sensitive places such as schools and government buildings," then-Justice Antonin Scalia wrote for the majority in the Heller case.

Except for a follow-up decision two years later, the justices largely stayed away from the issue, infuriating gun rights advocates and even some of the justices themselves.

Justice Clarence Thomas declared at one point that the "Second Amendment is a disfavored right in this court."

After Amy Coney Barrett took her seat, the court agreed to take up a new case, highlighting the impact of former President Donald Trump's three nominees on the court.

New York State Rifle & Pistol Association v. Bruen concerns a New York law governing licenses to carry concealed handguns in public for self-defense. It requires a resident to obtain a license to carry a concealed pistol or revolver and demonstrate that "proper cause" exists for the permit. Residents must show that they have a great need for the license and that they face a "special or unique danger to their life."

At oral arguments, the conservative majority court seemed poised to strike down the New York law as going too far -- although it is always dangerous to gauge the outcome of a case by what the justices say in open court. There did seem to be broad support for regulations that govern sensitive places, but the looming question will be the breadth of the decision and how it might impact other laws.

Arguments were held on November 3, months before a mass shooting on a Brooklyn subway carried out by a gunman who put on a gas mask, deployed a gas canister, and then began shooting, firing at least 33 times. In May, a gunman, killed 10 people in a Buffalo, New York, supermarket; less than two weeks later, another killed 21 adults at Robb Elementary School in Uvalde, Texas.

During oral arguments, several of the justices asked questions surrounding regulations aimed at sensitive places, including the subways. Paul Clement, a lawyer for the National Rifle Association affiliate behind the challenge, argued that New York is "entitled to have laws that say that you can't have weapons in sensitive places" and that he was not challenging those laws.

For her part, liberal Justice Elena Kagan pushed Clement for his views on the definition of sensitive places. She was the first to bring up New York City subways, asking if they count as sensitive places.

Noting that his clients live outside of New York City, Clement said, "I suppose I could give away the subway because they are not in Manhattan. They're in Rensselaer County."

Conservative Justice Samuel Alito, perhaps trying to gauge the scope of the eventual opinion, looked at the issue from the perspective of law-abiding people riding subways who want to be able to carry a gun to protect themselves.

Alito asked New York Solicitor General Barbara Underwood about people returning from work late at night in Manhattan. A doorman, a nurse, somebody who washes dishes are all citizens who have to "commute home by subway." Alito suggested that they may be people who are scared but who would not qualify for a license under the New York law.

"How is that consistent with the core right to self-defense, which is protected by the Second Amendment?" he asked.

Thomas brought a road atlas to oral arguments, presumably to emphasize the breadth of the law and the fact that it impacts people living far from bustling cities.

"It's one thing to talk about Manhattan or New York University's campus," Thomas said. "It's another to talk about rural upstate New York."

Potential impact of the court's action

Although only a handful of other states have laws similar to New York's, those states have some of the biggest cities in the country.

And while the mass shootings that occurred since the court began deliberating behind closed doors implicate assault weapons, mental health issues and age restrictions more than the conceal carry law before the court, a broad opinion could impact those kinds of laws as well.

"The American people have had enough and are demanding solutions to stop the slaughter," said Jonathan E. Lowy, the vice president, legal and chief counsel at the Brady Campaign.

"If the Supreme Court adopts the extremist view of the Second Amendment that the gun lobby is pushing, many of those solutions could be taken off the table, and we could be forced to live in this gun lobby-made nightmare," he said.

"If self-proclaimed originalists on the Supreme Court ignore the centuries of history supporting New York's gun safety law and wrongly force states to allow more guns in public places, more people will be shot and killed and our right to public safety will be in even more danger," Eric Tirschwell, executive director of Everytown Law, told CNN.

Fresh off of Tuesday's tragedy, Republican Sen. Ted Cruz from Texas -- a former Supreme Court law clerk -- highlighted the divide on the issue, saying that after such tragedies "you see politicians trying to politicize it."

"You see Democrats and a lot of folks in the media whose immediate solution it to try to restrict the constitutional rights of law-abiding citizens," he told reporters.

"That doesn't work. It is not effective and it doesn't prevent crime," he said, stressing that a better course would be to go after "felons and fugitives and those with serious mental illness."

Challengers in the case before the Supreme Court echoed similar sentiments as they asked to invalidate the New York law.

Clement told the justices that the law at issue makes it a "crime for a typical law-abiding New Yorker to exercise" a constitutional right.

"Carrying a firearm outside the homes is a fundamental constitutional right," he said. "It is not some extraordinary action that requires an extraordinary demonstration of need."

Eight states, including New York, have "may issue laws," which grant state officials wide discretion to deny a permit to an applicant.

But other conservatives are urging the Supreme Court to uphold New York's law. J. Michael Luttig, a Republican and former conservative appellate judge, filed a brief in support of the law.

Writing in The New York Times, Luttig and appellate lawyer Richard Bernstein said that the case "presents a test for this conservative Supreme Court."

He noted that "historically and traditionally," legislatures have restricted the public carry of guns and that the District of Columbia bans handguns in public in many places, referencing the January 6, 2021, attack on the US Capitol.

"Two days before the Capitol riot, the district's then-acting police chief publicly warned protesters they would be jailed if they brought their handguns to the protest," they wrote, noting that a "large majority" heeded the warning and left their guns at home.

"Had the district's strict restrictions on public carry not been on the books, there would doubtless have been even more lives lost and more mayhem on Jan. 6th," they said.

As the justices are considering the Bruen case, they have yet to act on several Second Amendment cases piling up on the court's docket -- left presumably in a holding pattern until the current case is decided.

One concerns a challenge to a New Jersey ban on magazines holding 10 rounds or more. Another concerns Hawaii's open carry law.

Just last week the justices gathered at their closed-door conference to discuss a challenge to Maryland's assault weapons ban.

"The firearms banned by Maryland -- AR-15s and other similar semi-automatic rifles," the challengers say, "are lawful in the vast majority of the States, they have common functionality, and law-abiding Americans own at least 20 million of them."

The Supreme Court has yet to act on the petition.