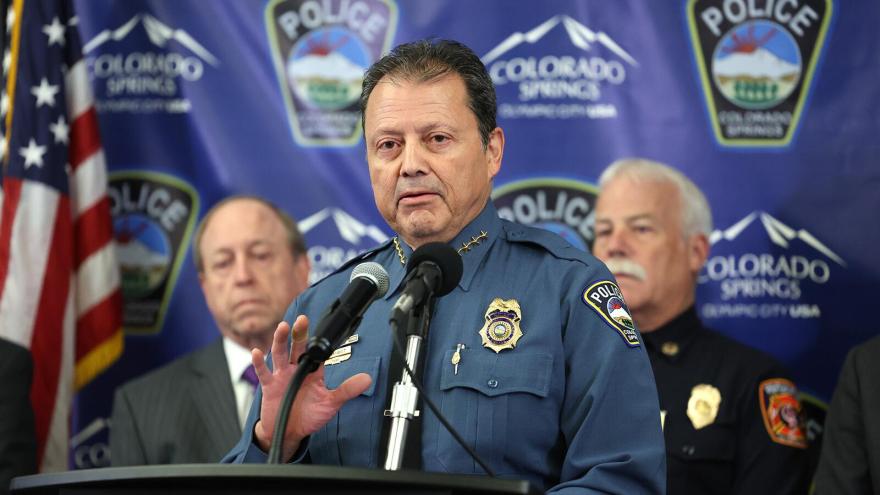 (CNN) -- The 22-year-old accused of carrying out a mass shooting over the weekend at an LGBTQ nightclub in Colorado Springs, Colorado, will remain held without bond following a court appearance Wednesday.

Anderson Lee Aldrich, appearing in court via video conference for the first time since the attack that left five dead and more than a dozen injured, answered a few questions in a barely audible voice.

Aldrich, whose attorneys say uses they/them pronouns, acknowledged they had watched a video about their rights and said they had no questions. The defendant could be seen slumped over in a chair -- their head resting on their right shoulder -- behind two defense lawyers.

Formal charges are expected at the next court hearing, set for December 6, Colorado's Fourth Judicial District Attorney Michael Allen said. Aldrich would be expected to appear then in person, he said, adding the date could change.

Ahead of the hearing, attorneys for Aldrich submitted a court filing stating the suspect identifies as nonbinary. "They use they-them pronouns, and for the purposes of all formal filings, will be addressed as Mx. Aldrich," the court document noted.

Asked after the hearing about the potential impact on the case of the defendant's nonbinary distinction, Allen said: "To us, his legal definition in this proceeding is the defendant," adding, "It has no impact on the way that I prosecute this case."

The prosecutor declined to comment on the motive for the crime or the investigation.

"I want them to know that we are going to be the voice for the victims in the courtroom and that we will be fighting alongside them during this entire process," Allen said of the victims' families.

The public defender's office is representing Aldrich and has declined all requests for comment, citing office policy.

As the investigation and legal process proceed, survivors and loved ones of those killed are processing the feelings of shock and grief after a fun night of drag performances and dancing turned violent at Club Q, a venue known as a safe space for the LGBTQ community.

The US has recorded more than 600 mass shootings so far this year, according to the Gun Violence Archive, which like CNN defines such incidents as those with at least four slain or injured, not including the shooter.

Daniel Aston, Raymond Green Vance, Kelly Loving, Ashley Paugh and Derrick Rump were killed in the attack at Club Q -- some while working a Saturday night shift and others while enjoying the night's events. At least 19 others were injured, most by gunshots, police have said.

Aldrich entered the nightclub just before midnight armed with an AR-style weapon and a handgun and immediately began shooting, police said.

"From the amount of shots that initially went off when he came into the club, I honestly thought it was multiple people shooting," clubgoer Gil Rodriguez told CNN on Monday.

The suspect was quickly taken down and contained by two patrons until police arrived, which officials say likely prevented more people from being killed or injured.

Richard Fierro, an Army veteran who was celebrating a birthday at the club with family and friends, tackled Aldrich to the ground and used the suspect's handgun to hit them repeatedly, Fierro told CNN. Another person jumped in to help and pushed the rifle out of Aldrich's reach, Fierro said.

Shortly after, Aldrich was taken into custody and hospitalized. On Tuesday, the suspect was transferred to the El Paso County Jail.

While murder charges will offer the longest sentencing options, Allen said he expects more charges on top of those.

"Colorado has biased-motivated crime statutes, which most people understand as hate crimes. We are definitely looking at that, based on the facts involved in this case," Allen said. "And if there's evidence to charge it, we'll absolutely charge those as well."

"Every single person who was there at Club Q is a victim of one crime or another," Weiser told CNN on Tuesday.

"It's really important that we're able to honor the victims and to be able to call out this crime for what it really appears to be, which is a hate crime motivated by who people were," he added.

New details emerge about the suspect

As authorities try to nail down a motive behind the shooting, new information has come to light about the suspect's upbringing and questions have been raised about why previous charges against Aldrich were dropped.

Aldrich was born under the name Nicholas Brink and legally changed the name in 2015.

That same year, Aldrich experienced cyberbullying on a parody website that contains photos of Aldrich and uses offensive slurs to mock the then-teen's weight and accuse Aldrich of engaging in illegal activity, according to an emerging portrait of the alleged shooter pieced together by CNN.

The page, which was first reported by the Washington Post, is still active.

Xavier Kraus, a neighbor of the accused shooter, said he and his girlfriend lived across the hall from Aldrich and their mother until September. Kraus said they mostly played video games together, often in Aldrich's apartment.

Kraus said he specifically remembered one time "Aldrich vocalized verbally" that they "did not like or slash hated the gays. Using a derogatory term for them." He added that many other "outbursts" were "racial."

Aldrich was "not someone I would have around my gay friends," Kraus said. He said the alleged shooter never mentioned they were non-binary.

Aldrich was proud of the weapons they owned, according to Kraus. When Aldrich showed him a weapon one time, Kraus told them, "guns like this scare me." Kraus recalled Aldrich telling him, "'Bro, it's not the guns, it's the people that you gotta be scared of,' and that conversation kinda sits with me."

Aldrich's mother told police her son threatened her with a bomb

According to a relative, the suspect's primary caretaker was his grandmother, who declined CNN's request for an interview. Aldrich ended up under her supervision when their mother struggled with a string of arrests and related mental health evaluations, according to court records and an interview with a family member.

Laura Voepel, Aldrich's mother, called police last year and reported Aldrich had entered the Colorado Springs house she was renting a room in and threatened her with a homemade bomb.

Video obtained by CNN showed Aldrich apparently ranting about the police during the incident and challenging them to breach the home.

"I've got the f**king sh*theads outside, look at that, they've got a bead on me," Aldrich says on the video, pointing the camera at a window with blinds covering it. "You see that right there? F**king sh*theads got their f**king rifles out."

Later in the video, Aldrich says, "If they breach, I'mma f**king blow it to holy hell."

The video ends with Aldrich delivering what seems like a message to law enforcement outside: "So, uh, go ahead and come on in, boys! Let's f**king see it!"

The video does not actually show any officers outside the house, and it's not clear from the video whether Aldrich had any weapons in the house.

Several hours after the initial police call, the local sheriff department's crisis negotiations unit was able to get Aldrich to leave the house. Authorities did not find any explosives in the home, the El Paso County Sheriff's Office said.

Aldrich was arrested and booked into the El Paso County Jail on two counts of felony menacing and three counts of first-degree kidnapping, according to a 2021 news release from the sheriff's office.

Aldrich purchased the two weapons brought Saturday night to Club Q, law enforcement sources told CNN this week. But it's not clear whether the AR-style rifle and handgun were purchased before or after the 2021 case.

Aldrich's arrest in connection to the bomb threat would not have shown up in background checks because the case was never adjudicated, the charges were dropped and the records were sealed. It's unclear what prompted the sealing of the records.

With the shooting happening just days before Thanksgiving, some families that were planning holiday gatherings are now reeling from the impact of the violence.

Residents, survivors and loved ones of the victims have supported each other through vigils, ceremonies and financial contributions, Suthers said.

"(Club Q) was truly a safe haven, and we want to make sure those sorts of things continue to exist in the future," Suthers said.

A Thanksgiving dinner for the LGBTQ community -- which used to be held at Club Q -- will take place instead at Pikes Peak Metropolitan Community Church, CNN affiliate KRDO reported.

Jason Plata, a church representative, called Thursday's dinner a space "to break bread with each other and be able to remember our friends that we've lost and some of our friends that are still fighting."

A survivor named Anthony, who declined to give his last name, said while "the community is strong, and we will get through this," he now feels unsafe.

"I will be uncomfortable going anywhere for a long time," Anthony said during a news conference while still hospitalized Tuesday, KRDO reported.

Asked what he would say to the accused shooter, Anthony said he would tell Aldrich, "Why don't you meet somebody and get to know their true heart before passing judgment?"

The suspect, Anthony said, "harmed a lot of pure, true hearts, and I don't know if they'll ever be the same."