T-Mobile and AT&T are Wall Street bright spots, but Verizon is struggling 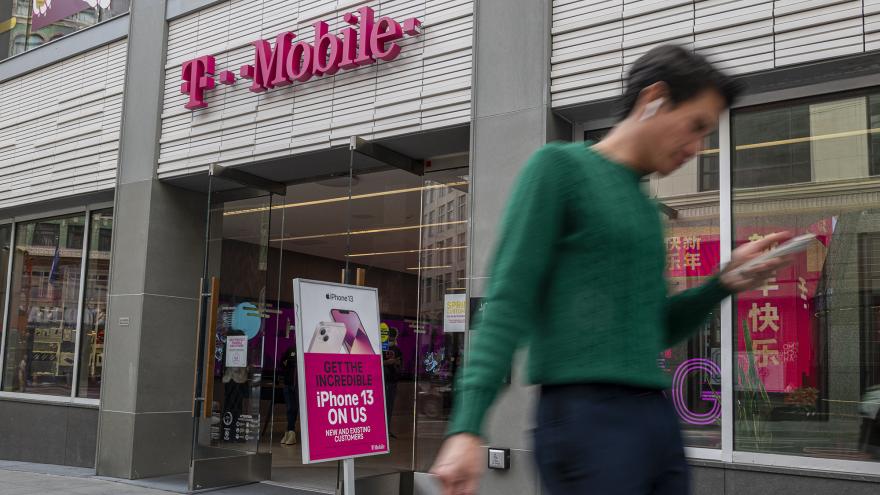 (CNN) -- Inflation concerns have made it a brutal year for stocks, but wireless service is one area where prices aren't rising much — and the sector has been a bright spot on Wall Street.

That's largely because cell phone bills have been pretty much holding steady even in this inflationary environment.

AT&T and Verizon did report slight declines in average revenue per user (ARPU), a key price metric in the wireless business, during the first quarter. T-Mobile's ARPU rose in the first quarter after dipping in the fourth quarter.

But the three companies, despite tough competition between themselves and new threats from cable providers offering wireless service, are still posting stable — if not spectacular — sales growth.

Analysts are forecasting about a 1% to 2% increase in revenue for all three companies in 2022. (Note the AT&T numbers are just for its communications business following the spin-off of WarnerMedia, the owner of CNN.)

Can the Big Three of wireless continue to outperform the rest of Wall Street? Analysts seem to think it's possible.

T-Mobile has been strengthened by its acquisition of Sprint and analysts are bullish on the stock thanks to big subscriber gains and an aggressive rollout of its high-speed 5G network.

Meanwhile AT&T has benefited from becoming more of a pure-play telecom once again. The company spun off WarnerMedia earlier this year and that unit merged with media company Discovery Communications to create Warner Bros. Discovery.

As for Verizon, it may be due for a comeback: It was the second-worst Dow stock last year, trailing only Disney.

Verizon may also get a boost from the trend of conservative investors flocking to big dividend payers during this tough market because of the steady income streams they provide. Verizon's yield is 5.2%, compared to about 2.8% for the 10-year Treasury.

AT&T is also a beneficiary of this trend, as it pays a dividend that yields 5.4%. T-Mobile does not pay a dividend.

Yet there may be good reasons why Verizon could continue to lag behind Ma Bell and T-Mobile.

Verizon is the "elder statesman of the wireless industry," said Craig Moffett, an analyst with MoffettNathanson, after Verizon's most recent earnings report last month. Moffett noted that Verizon's growth potential is less exciting than AT&T's and T-Mobile's.

He pointed out that "AT&T has taken the mantle of brash discounter," offering generous subsidies to customers for new phones as "they appear clearly wedded to commitments to show subscriber growth at all costs."

Other market strategists are also bullish on AT&T. Ivan Feinseth, chief investment officer and director of research with Tigress Financial Partners, said in a report this month that AT&T should be able to "deploy the cash received from its WarnerMedia sale to reduce its debt levels."

Feinseth also thinks AT&T will soon get growth back on track in its core business.

"While 2022 will remain a transitional year, revenue and, more importantly, cash flow and profitability will ramp up significantly in 2023 and beyond, with long-term growth driven by ongoing 5G and broadband opportunities," he said. "AT&T is well positioned to gain from solid subscriber growth across its key business lines, including wireless."

Moffett is also confident that T-Mobile can continue to thrive.

"T-Mobile is still the industry's upstart, and their investors demand subscriber growth. With a still-long runway in rural and business, and the industry's lowest prices, they are well positioned to deliver," he wrote.

Warren Buffett's Berkshire Hathaway also has a stake in T-Mobile. But the Oracle of Omaha's firm recently sold off nearly all of its stake in Verizon.