Takeaways from the Senate hearing on the US Capitol attack 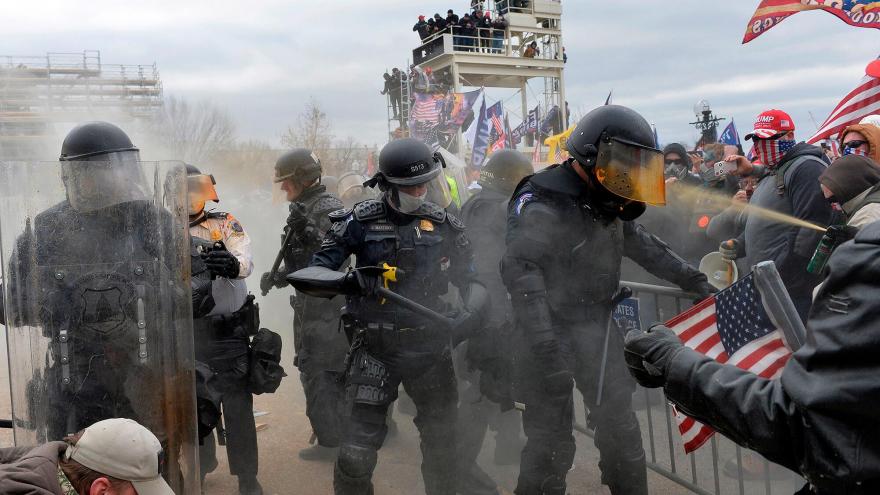 Supporters of Former President Donald Trump clash with police and security forces as they try to storm the US Capitol in Washington, DC on January 6.

(CNN) -- Former officials who were responsible for security at the US Capitol testified Tuesday at the first congressional hearing about the failure to prevent the deadly insurrection on January 6, admitting some failures but also deflecting blame to other security agencies, saying that the FBI did not provide any warnings beforehand that there would be a coordinated assault.

Here are five takeaways from the Senate hearing.

One of the most stunning revelations came from Sund, who told lawmakers that he only learned this week about a bombshell FBI memo sent one day before the insurrection with an explicit warning about potential violence.

The much-discussed "Norfolk memo," named for the FBI office in Virginia where it originated, was a key point of contention at Tuesday's Senate hearing as Sund revealed that the report reached his department before the attack but that he and other leaders did not see it.

"This is a report that I am just learning about within the last, they informed me yesterday of the report," Sund said when asked about the memo, which was first made public by The Washington Post on January 12. It is unclear why it took six weeks for Sund to learn about that memo.

The revelation underscored a consistent theme of the hearing: Communication failures put the Capitol -- and people's lives -- at risk.

"How can you not get that vital intelligence on the eve of what's going to be a major event?" Michigan Democratic Sen. Gary Peters asked Sund.

Sen. Roy Blunt, a Missouri Republican, asked the former officials about a request that Sund claims he made for National Guard troops in the days leading up to the riot.

Sund testified that he asked Irving and Stenger to make an emergency declaration, which he believed would be required to call in troops. Irving responded that he actually didn't view Sund's inquiry as a formal request for troops, but instead saw it as a conversation where Sund said the National Guard offered to deliver 125 troops to help with crowd control.

Irving said all three men decided that the intelligence regarding the planned protest on January 6 didn't warrant a military response.

Blunt also pressed on conflicting timelines about when the Guard was requested after the security situation deteriorated at the Capitol. Sund claimed he made the request at 1:09 p.m. ET, but Irving insisted he had no recollection of a conversation at that time, instead claiming the two spoke around 1:30 p.m., and that the request for troops was made to him after 2 p.m.

Spotlight on role of White supremacists

Witnesses and lawmakers highlighted the role of White supremacists in the pro-Trump mob, which undercut some recent attempts by prominent Republicans to downplay their involvement.

Videos from the attack and court documents in cases against rioters have clearly demonstrated that some people with White supremacist views attended the pro-Trump rally and breached the Capitol. The hearing Tuesday gave top security officials a chance to affirm these findings.

All four witnesses said "yes" when asked by Sen. Amy Klobuchar, a Minnesota Democrat, "would you agree that this attack involved White supremacists and extremist groups?"

Carneysha Mendoza, a Capitol Police captain, reminded lawmakers that "multiple White supremacist groups, including the Proud Boys and others" came to DC for the first two pro-Trump rallies after the November election. Many members of groups returned for the January 6 rally and were at the frontlines of the mob that stormed the Capitol.

This testimony undercut attempts by some influential Republicans to downplay or deny the role that racist right-wing groups played in the insurrection. For example, the conservative Fox News host Tucker Carlson claimed on his show Monday night that "there is no evidence that White supremacists were responsible for what happened on January 6. That's a lie."

Lawmakers from both parties asked legitimate, fact-finding questions that will help figure out what happened on January 6 and what needs to be done to prevent a repeat in the future.

But every now and then, right-wing conspiracy theories seeped into the proceedings, some from the same Republicans who peddled false claims about voter fraud that got us into this mess.

Sen. Ron Johnson, the Wisconsin Republican who has repeatedly spread disinformation about the 2020 election, used his time to read from an article published in a conservative publication that suggested that left-wing agitators and "fake" Trump supporters were responsible for the attack, and that Trump voters wouldn't attack police. These claims have been widely debunked.

The ex-security officials were also asked if Hill leadership delayed the National Guard deployment -- an allegation that some Republicans have used to pillory House Speaker Nancy Pelosi. These questions were asked by Sen. Josh Hawley, a Missouri Republican who previously promoted many of the 2020 election conspiracies that inspired the insurrection itself.

Irving responded that congressional leaders who oversee the Capitol Police had "absolutely not" played any role in any delays, debunking an increasingly common GOP talking point.

Captain Mendoza provided riveting testimony about her experience responding to the insurrection, including describing injuries due to tear gas exposure.

"I proceeded to the Rotunda where I noticed a heavy smoke-like residue and smelled what I believed to be military grade CS gas -- a familiar smell," Mendoza said, mentioning that she served in the Army. "It was mixed with fire extinguisher spray deployed by the rioters. The rioters continued to deploy CS inside the Rotunda."

CS is a reference to tear gas, which is often used by police as a riot control agent. Footage from the Capitol attack shows officers and rioters using chemical sprays against each other during the hours-long melee.

"Officers received a lot of gas exposure, which is a lot worse inside the building versus outside, because there's nowhere for it to go," Mendoza said. "I received chemical burns to my face that still have not healed to this day."

She also described the terrifying moments while she and other officers brawled with hundreds of rioters.

"At some point, my right arm got wedged between the rioters and railing along the wall," she testified. "A (Capitol Police) sergeant pulled my arm free and had he not, I'm certain it would have been broken."