Taliban likely gained access to millions that US transferred to Afghan government before collapse, watchdog says 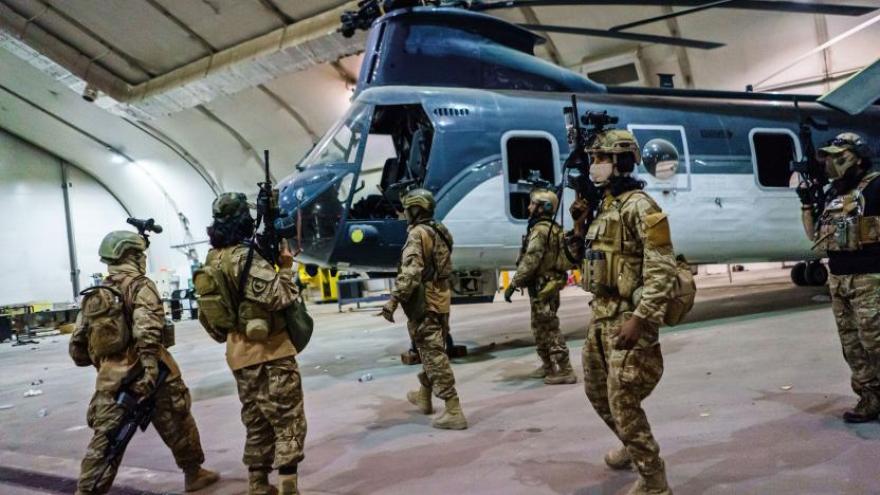 Taliban fighters, wielding American weapons and uniforms, storm into the Kabul International Airport after the US military completed their withdrawal, August 31, 2021.

(CNN) -- The Taliban likely gained access to tens of millions of dollars the US transferred to the Afghan government before it collapsed, a US government watchdog found.

The Special Inspector General for Afghanistan Reconstruction (SIGAR), which monitored US projects and spending during America's longest war, said in its latest report that the Taliban likely accessed approximately $57.6 million in funds from the State Department, Department of Defense and USAID.

"Once the money was transferred, US agencies lost visibility over those funds and relied on the Afghan government to disburse funds for their intended purposes," SIGAR wrote in the report.

The money was transferred before the collapse of the Afghan government on August 15, 2021, and the subsequent Taliban takeover of power. The vast majority of the funds came from the Defense Department, which transferred $45.6 million, according to SIGAR, while the State Department and USAID transferred $2 million and $10 million, respectively.

"It is likely that some portion of the $57.6 million remained in Afghan government-controlled accounts when the Taliban returned to power and assumed control of Afghan ministries, including the Ministry of Finance," SIGAR found, and there are no plans to try to recover any of the money.

The US withdrawal from Afghanistan, whose final act played out over four dramatic weeks in August 2021 and led to the deaths of 13 US service members, is likely to come under renewed scrutiny with Republicans set to take over the House after the midterm elections. One year later, the GOP members of the House Foreign Affairs Committee criticized the Biden administration for its lack of planning for the withdrawal based on their own investigation into the withdrawal.

But the Pentagon questioned whether it was even possible for the Taliban to access the money, given the fall of the Afghan government and financial sector.

"Due to the collapse of the Afghan banking system and its accompanying digital infrastructure by August 15, it is extremely unlikely that the Taliban was able to gain access to any portion of these funds," said Pentagon spokesman Lt. Col. Rob Lodewick. The money was transferred electronically and was intended for Afghan army salaries, training and expenses.

In addition, the Pentagon says by law it did not have the ability to recoup the money since it "lacked the statutory authority to recall funds already transferred to another government," Lodewick said.

"It remains unclear whether the $7.1 billion figure reported to Congress is accurate," SIGAR wrote in its report. The Defense Department told SIGAR the figure was based on the best data it had and that the number may actually be lower if more precise information were available.

In response to SIGAR, the State Department wrote in an October letter that it continued to "engage and cooperate" during this evaluation, and it rejected any claims that it was not providing complete information.

"To be clear, the State Department and USAID remain committed to assisting SIGAR with its important auditing role," the agencies wrote in an earlier April letter, though they questioned whether SIGAR had the authority to investigate given the end of the reconstruction mission in Afghanistan.