Tampa Bay Buccaneers wide receiver Russell Gage is taken to the hospital with concussion after being injured in Monday night's game, coach says 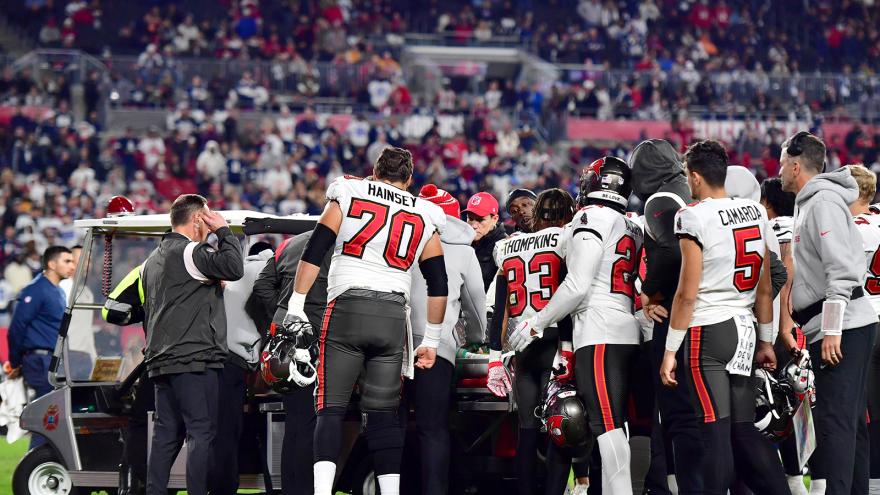 (CNN) -- Tampa Bay Buccaneers wide receiver Russell Gage was taken to a hospital with a concussion after an injury during a NFL Wild-Card playoff game against the Dallas Cowboys Monday, his coach said.

The game was paused with two minutes and 55 seconds left in the fourth quarter after Gage fell awkwardly after he was hit across his neck on a second down play at Tampa's Raymond James Stadium.

Gage appeared to try to get up but couldn't and was quickly swarmed by medical staff.

"They took him to the hospital right now, he has a concussion. They'll also test him for potential neck injuries," Buccaneers head coach Todd Bowles said in the postgame news conference following the team's 31-14 loss to the Cowboys.

When asked if Gage had movement in his extremities, Bowles replied: "His fingers were moving when he was down there. I don't know about the rest."

After he was injured, trainers surrounded Gage and players from both teams knelt while he was receiving medical care. The broadcast showed Gage moving his legs while trainers were administering care. He was later immobilized and carted off the field.

"After suffering a neck injury and concussion during the fourth quarter of last night's game, Russell was taken to a local hospital where he remained overnight for additional testing and observation," said the Tampa Bay Buccaneers in statement on Tuesday.

"Russell has had movement in all extremities and will continue to undergo additional testing."

A medical team resuscitated the 24-year-old before an ambulance carried him off the field in critical condition. He was discharged from the hospital last week.