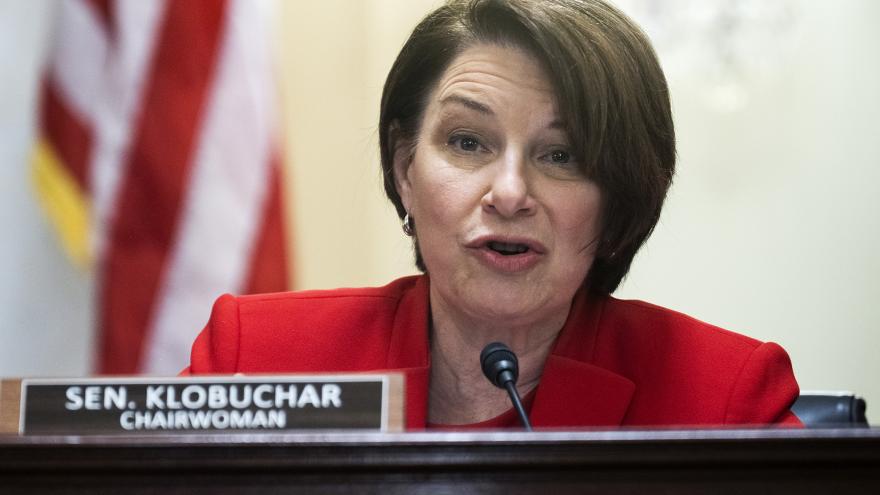 (CNN) -- Senator Amy Klobuchar criticized Ticketmaster in an open letter to its CEO, saying she has "serious concerns" about the company's operations following a service meltdown Tuesday that left Taylor Swift fans irate.

In the letter to CEO Michael Rapino, the Democrat from Minnesota and chair of the Senate Judiciary Subcommittee on Competition Policy, Antitrust, and Consumer Rights, wrote that complaints from Swift fans unable to buy tickets for her upcoming tour, in addition to criticism about high fees, suggests that the company "continues to abuse its market positions."

"Ticketmaster's power in the primary ticket market insulates it from the competitive pressures that typically push companies to innovate and improve their services. That can result in the types of dramatic service failures we saw this week, where consumers are the ones that pay the price," Klobuchar wrote.

Ticketmaster and Live Nation, the country's largest concert promoter, merged about a decade ago. Klobuchar noted that the company at the time pledged to "develop an easy-access, one-stop platform" for ticket delivery. On Thursday, the senator told Rapino that it "appears that your confidence was misplaced."

"When Ticketmaster merged with Live Nation in 2010, it was subject to an antitrust consent decree that prohibited it from abusing its market position," Klobuchar wrote. "Nonetheless, there have been numerous complaints about your company's compliance with that decree."

The letter includes a list of questions for Rapino to answer by next week. Ticketmaster did not immediately respond to a request for comment from CNN Business.

On Tuesday, the company said "there has been historically unprecedented demand with millions showing up" to buy tickets for Swift's tour and thanked fans for their "patience."

Klobuchar is the latest high-profile politician to openly criticize Ticketmaster for the ticketing disaster that left bad blood between Swift fans and the company.

"@Ticketmaster's excessive wait times and fees are completely unacceptable, as seen with today's @taylorswift13 tickets, and are a symptom of a larger problem. It's no secret that Live Nation-Ticketmaster is an unchecked monopoly," Rep. David Cicilline, currently the chairman of the Antitrust Subcommittee, tweeted on Tuesday.

"Daily reminder that Ticketmaster is a monopoly, its merger with LiveNation should never have been approved, and they need to be reined in," tweeted Rep. Alexandria Ocasio-Cortez.

Complaints about the company's monopoly power go back long, long before Tuesday's ticket problems, when the platform appeared to crash or freeze during presale purchases for Swift's latest tour.

In 1994, when Taylor Swift was only four years old and ticket purchase queues were in person or on the phone, not online, the rock group Pearl Jam filed a complaint with the Justice Department's antitrust division asserting that Ticketmaster has a "virtually absolute monopoly on the distribution of tickets to concerts." It tried to book its tour only at venues that didn't use Ticketmaster.

The Justice Department and many state attorneys general have made similar complaints over the years.