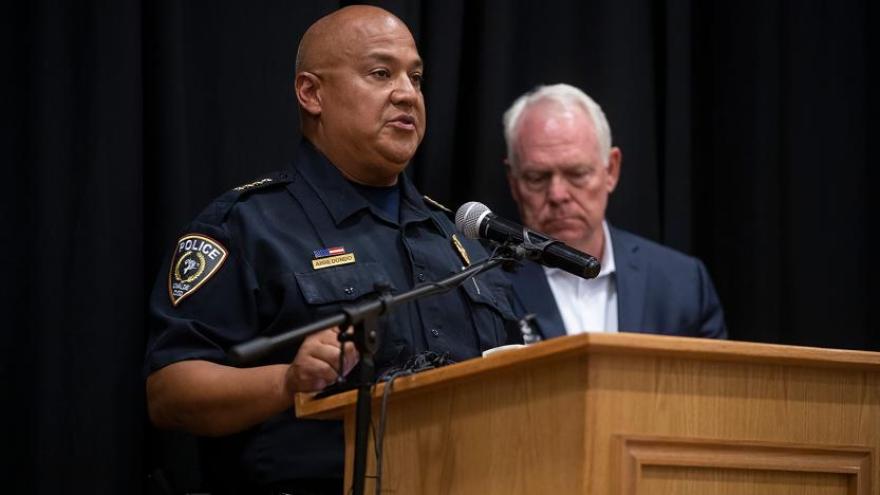 Uvalde police chief Pete Arredondo seen at a press conference on May 24. A termination hearing to decide the fate of Arredondo has been delayed again.

(CNN) -- A termination hearing to decide the fate of embattled Uvalde School District Police Chief Pete Arredondo has been delayed due to "a scheduling conflict," the school district said Wednesday.

The hearing was set to be held Thursday and has already been rescheduled once from the originally intended date of July 23. The Uvalde school board announced they would consider Arredondo's termination after the superintendent recommended the chief be fired following his highly criticized conduct during the Robb Elementary school massacre in May.

Arredondo will remain on unpaid leave until a new date and time can be set for the hearing, the school district said in a statement.

The school district police chief has faced withering criticism from officials, families and the public over his handling of the shooting, in which 19 children and two teachers died. Officials have identified Arredondo as the on-scene commander during the massacre, though the chief has said he did not consider himself in charge.

Officers responded to the school within minutes of the shooting beginning on May 24 but waited for over an hour outside adjoining classrooms before finally entering and killing the shooter, according to a timeline from the Texas Department of Public Safety.

Calls from victims' families and Uvalde residents for Arredondo's termination were fueled by the release of a Texas House Investigative Committee report that outlined a series of failures by responding law enforcement agencies on the day of the shooting. The report said the agencies share "systematic responsibility" for the botched response and concluded that Arredondo failed to assume his pre-assigned responsibility of commanding the incident.

In the report, Arredondo said he "was responding as a police officer" and did not consider himself in charge.

A CNN review of body-worn camera videos from officers on the scene during the shooting shows Arredondo giving orders, coordinating officers and being deferred to by officers confused about their roles or response to the shooting. The video footage, considered alongside other documents released, undermine Arredondo's claim that he did not consider himself to be in command that afternoon, the CNN analysis shows.

"Because of the lack of clarity that remains and the unknown timing of when I will receive the results of the investigations, I have made the decision to place Chief Arredondo on administrative leave effective on this date," Harrell wrote in the announcement.

Arredondo has rarely spoken publicly about his actions on the day of the massacre, though he did give an interview to the Texas Tribune in which he denied instructing officers not to breach the classroom door and said, "I didn't issue any orders."

Arredondo has nearly 30 years of law enforcement experience. He also served on the Uvalde City Council until he resigned from the position in July in the wake of the shooting.

"After much consideration, it is in the best interest of the community to step down as a member of the City Council for District 3 to minimize further distractions," Arredondo said in his resignation letter. "The Mayor, the City Council, and the City Staff must continue to move forward to unite our community, once again."