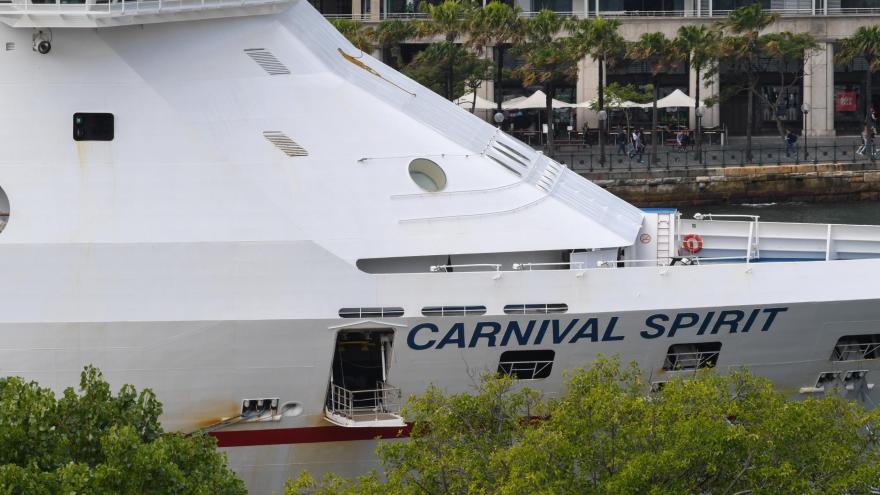 (CNN) -- The Centers for Disease Control and Prevention is investigating a recent Covid-19 outbreak on a Carnival cruise ship that docked in Seattle after a two-week voyage.

The Carnival Spirit, which sailed through the Panama Canal, departed Miami on April 17 and arrived in Seattle on May 3, according to a statement from the cruise line. The ship holds 2,124 guests and 930 crew members, Carnival said.

The ship's color status helps the CDC determine the scope of investigation, the agency said.

Carnival Spirit is one of 62 cruise ships currently sailing at orange status, the CDC said in a statement to CNN.

Both the cruise line and CDC said there were no severe outcomes or serious health issues among those who tested positive, and Carnival said most guests were asymptomatic.

"Our health and safety protocols exceed CDC guidelines and were closely followed including vaccination requirements and pre-cruise testing of all guests. Our crew are also vaccinated and wear masks," Carnival said in a statement to CNN.

"Our protocols are designed to flex up as needed and additional measures were implemented during the voyage," the statement added. "In addition, all guests who were scheduled to continue on with the ship's next cruise to Alaska were tested and any guests and their traveling companions who tested positive were disembarked."

The ship departed Seattle for Alaska later on May 3, according to Carnival's statement.

The CDC is working with the cruise line as well as state and local health agencies to "enact existing Covid-19 agreements and protocols," the statement added.

Some passengers who were on board the Carnival Spirit alleged that crew members mishandled the Covid-19 outbreak on the ship.

Darren Siefertson, who is from Las Vegas, Nevada, told CNN he boarded the ship on April 17 from Miami and was informed by April 26 that there was a Covid-19 outbreak on the ship.

After testing positive, Siefertson said he was promised to be moved to an isolation cabin but ended up being forced to stay in the same room as his roommate.

Siefertson said when he called the medical center for an update, the center had already closed before its scheduled closing time, and no one was picking up the phone.

When Siefertson's cabin mate went to guest services to ask what they should do, he was told there were no more isolation cabins available, and he would have to stay in the same room as Siefertson.

Ship guests also complained that room service took "hours to get food to those who were in quarantine," Siefertson said.

"There were times we ordered our food at 1 p.m. and it didn't show up until 7 p.m.," Walter Babij, who was on the cruise with his wife, told CNN. Both Babij and his wife tested positive for Covid-19 while aboard the ship and quarantined in an isolation cabin.

"There were also a few times we didn't get our complete orders. We would have to call several times to track down our food. We were completely dependent on them," Babij said.

Siefertson also complained that a few days after testing positive, his cabin and two other cabins near him began to reek of sewage.

"You couldn't even call to ask someone to fix the problem because no one would pick up the phone and we couldn't leave our room, so I had to stay in this room that smelled like a toilet. It was terrible," Siefertson said. "Carnival said they managed the situation, but that is so not true. They were so overwhelmed."

Both Siefertson and Babij told CNN they felt the cruise line was "overwhelmed."

"I don't think they expected that level of cases and when it got to a certain level they didn't know what to do. It was a perfect storm," Babij said.