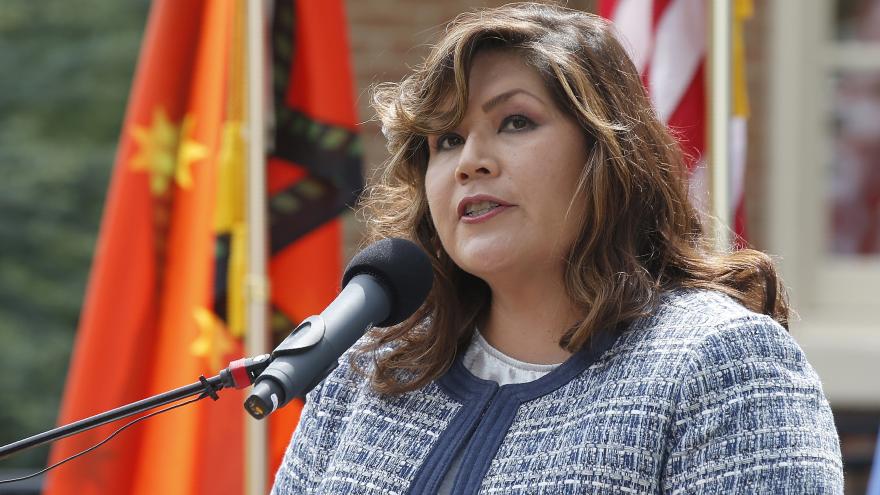 In 2019, the Cherokee Nation named Kimberly Teehee as its delegate to the House of Representatives. The tribe is again calling on Congress to seat her.

(CNN) -- The Cherokee Nation is renewing its campaign for representation in Congress, calling on federal legislators to honor a treaty that the US government made nearly 200 years ago.

In a video released last week, the tribal nation reasserted its demand that Congress seat its delegate in the House of Representatives -- a right stipulated by the 1835 Treaty of New Echota.

Under the treaty, brokered between the US government and a minority group of Cherokee leaders who claimed to represent the tribe, the Cherokee were ultimately made to give up their ancestral land in the South and relocate to present-day Oklahoma. Though a majority of the Cherokee people -- including then-Principal Chief John Ross -- opposed the treaty, it was ratified in 1836. About a quarter of the tribe's population died of disease, starvation and exhaustion on the resulting journey now known as the Trail of Tears.

In exchange for their homelands, the Cherokee were promised $5 million, new land and other provisions, among them a delegate in the House of Representatives.

"For two centuries, Congress has failed to honor that promise," Principal Chief Chuck Hoskin Jr. said in the video, referring to the delegate. "However, the Treaty of New Echota has no expiration date. The obligation to seat a Cherokee Nation delegate is as binding today as it was in 1835."

In 2019, Hoskin tapped Kimberly Teehee as the Cherokee Nation's official representative to Congress. Teehee was a senior policy adviser for Native American Affairs during President Barack Obama's administration and served as a senior adviser to former Rep. Dale Kildee of Michigan. She has also held various positions in the Cherokee Nation government.

If Teehee were to be seated, her role would likely be similar to other non-voting members of Congress. Though those members can't vote on the House floor, they can vote in committee, introduce legislation and engage in debate.

Currently, the House has six non-voting members. Washington DC, American Samoa, Guam, the Northern Mariana Islands and the US Virgin Islands are represented by a delegate, who serves a two-year term. Puerto Rico is served by a resident commissioner, who is elected every four years.