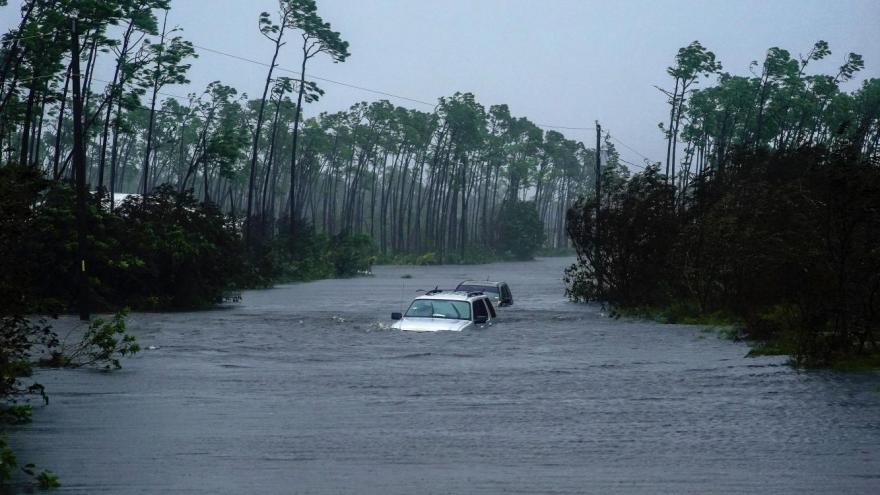 Hurricane Dorian leaves cars and homes submerged in the Bahamas as relief organizations come to help.

(CNN) -- The immense physical destruction on the Bahamian islands of Abaco and Grand Bahama can easily be seen from the air -- but officials are only now beginning to grasp the devastating personal toll for families who have lost loved ones in Hurricane Dorian.

The killer storm -- the strongest to ever to make landfall in the country -- wiped out many homes, and in some cases, entire neighborhoods were mashed into rubble.

The death toll from the storm jumped Wednesday from seven to at least 20, but as searchers comb the landscape in the upcoming days the extent of the damage will be revealed.

"We expect that this number will increase," Prime Minister Hubert Minnis said at a Wednesday night news conference.

Though the Bahamas experiences hurricanes frequently, he said that Dorian, which made landfall as a Category 5, has caused "generational devastation."

It will require a massive recovery and relief effort.

The only international airport on the island of Grand Bahama has been ripped apart by Dorian.

"After two days of trying, we're finally able to get into the Freeport airport," CNN's Patrick Oppmann said from the scene Wednesday.

"It's gone. ... The level of devastation is actually breathtaking. There are no walls left at the airport. The ceiling has come crashing."

"The runway field is now a debris field," Oppmann said.

Now that Dorian's vicious bands of rain and wind are slowly crawling up the southeast US coast, Bahamians are finally seeing sunlight again.

"Nothing compares to what we went through the past two days," survivor Michael Hynes said. "Almost 48 hours now with nonstop carnage."

HOW TO HELP VICTIMS OF HURRICANE DORIAN

Volunteers wade through flooding to save strangers

Rochenel Daniel is one of the many Bahamians who took it upon himself to rescue others.

"The first one we found was my brother. He was clinging on to a tree, and he made it out safe," Daniel said.

"But we are unable to locate his wife at the moment. We hope that she's OK."

Volunteers are fighting their own fatigue to save survivors worn out from the prolonged hurricane.

"Some people, they were exhausted. Some we had to carry," Daniel said. "Some couldn't even make it."

Freeport resident Harold Williams and his son went out on a Jet Ski to get stranded relatives who waded out to them in chest-deep waters.

"I don't think we've seen anything like this in our lifetime," Williams said. "Total destruction."

In parts of the Abacos, going door-to-door isn't an option because there are no doors. Houses have been replaced with rubble.

A hospital isn't even reachable

Injured residents can't reach one hospital because it's blocked by submerged cars.

Not only is the island's airport ruined, a road leading up to it has been replaced by a river of floodwater.

Between Grand Bahama and the Abacos, about 60,000 people may be in dire need of food relief, the World Food Programme said.

Officials said a British naval ship was in the harbor on Abaco, which had been cleared of debris.

"They are distributing food and water to persons in need," Minister of National Security Marvin Dames said.

The US Coast Guard has conducted 61 rescues in the Bahamas so far and is doing aerial surveys, Rear Adm. Doug Fears told reporters during a FEMA conference call Wednesday.

Houses look like they were put in a blender

Even new homes built under more stringent building codes were destroyed, said Brandon Clement, who shot footage of the destruction from a helicopter.

One older neighborhood was wiped out, he said.

"You can't tell that there are any homes there," he said. "It looks like a bunch of building materials were put in a big grinder and thrown on the ground."

The Abacos suffered massive destruction, the Prime Minister said, with 60% of homes in the town of Marsh Harbor damaged.

"There are no words to convey the grief we feel for our fellow Bahamians in the Abacos and Grand Bahama," Dionisio D'Aguilar, minister of tourism and aviation, said in a statement on Wednesday.

Hotels in the Abaco and Grand Bahama islands are closed, according to the tourism ministry.

Most of The Bahamas' other islands are open for tourists.