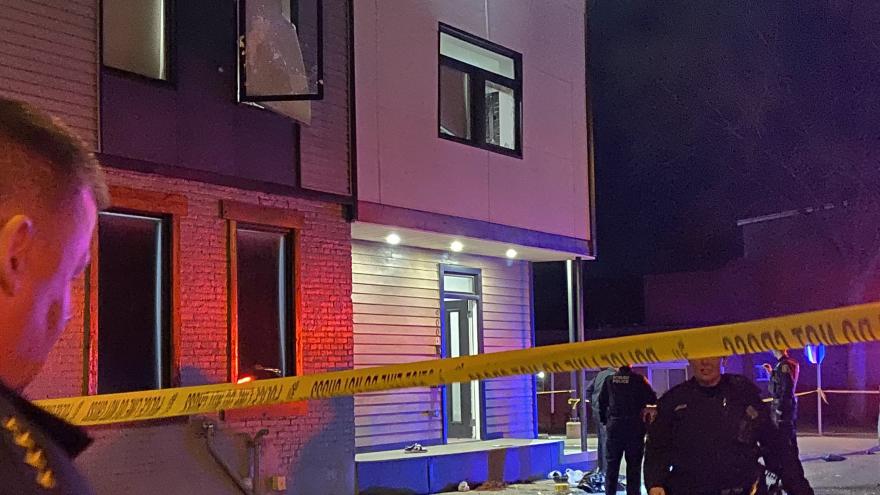 (CNN) -- The bloodshed over Easter weekend was emblematic of the alarming and unabated surge in gun violence in the United States.

From New York to Pennsylvania to Florida, from Nevada to California to Oregon, eight people were killed and dozens injured during at least 10 mass shootings last weekend alone.

The violence added to the year's growing toll of mass shootings in the US, which stood at 154 as of Sunday morning, according to the Gun Violence Archive. The archive and CNN define a mass shooting as an incident in which four or more people are shot, not including the shooter.

The Easter weekend carnage included two teenagers who were gunned down at a packed party in Pittsburgh early Sunday when, police said, multiple shooters unloaded more than 90 rounds. Some partygoers -- many of them underage -- suffered cuts and broken bones from jumping out windows when the shots rang out.

Experts consider easy access to guns a root cause of the violence, and open-carry states lower the barrier for people to own and carry guns in public. But the spike in violence since summer 2020 has been general, across cities and states with lax and strict gun laws, with progressive and conservative prosecutors, as well as Republican and Democratic mayors and governors.

As these waves of gun violence flood communities with hopelessness and despair, five experts consulted by CNN see possible solutions and reasons for hope.

Cedric Huntley, executive director of the Nonviolence Institute in Rhode Island -- which has worked with police and activists for decades to offer training aimed at stemming gang violence and retaliatory shootings -- said there's no room for despair in the fight against gun violence.

"I have an outreach and intervention team here and on a daily basis we talk about what's happening out there," he said. "We talk about ways that we can intervene but we can't have hopelessness."

Institute staff works with law enforcement to mediate potential gang conflicts, provide mentors for young people at risk of turning to gangs, respond immediately to the scenes of shootings and stabbings and hospital emergency rooms in an effort to prevent conflicts from escalating, and match up victims with community services.

Most workers have served time for violent crimes and have espoused conflict resolution and the nonviolent principles of the Rev. Martin Luther King Jr., according to Huntley. They are an essential part of the front line against the scourge of gun violence.

"They're the best ambassadors to say, 'Hey listen, I want to make a difference,' " Huntley said. "Our lead trainer was formerly incarcerated. He was 19 when he was involved in a crime and sent to prison for a murder he didn't do. But he was involved. He was there. He was a co-conspirator. He spent 14 years in prison, got nonviolence training inside the prison walls and now is an expert in nonviolence."

Another outreach leader is a young former gang member who served time on weapons and drug charges. He has worked at the institute since getting out of prison. One trainer is a mother who lost her daughter in a triple homicide in Providence in 2012.

The institute has fostered relationships and trust with both law enforcement and local gangs.

Alex Kotlowitz has spent a life telling stories of violence and urban poverty, including his 1991 classic book, "There Are No Children Here," about two young brothers growing up in a public housing complexon Chicago's West Side.

"In my own city, in Chicago, the number of shootings and homicides is staggering the last couple of years," he said. "I have to say, I'm not without hope though."

Chicago police investigated 797 homicides last year, the most since 1996.

"The street violence that we see in our cities, the vast majority of it happens in deeply distressed neighborhoods," Kotlovitz said.

"That's no coincidence. We've got to recommit ourselves to finding ways to fortify and rebuild these communities -- all the obvious things, which is affordable housing, accessible health care, better schools, community centers. That's the part that drives me crazy. All the things we already know but we're unable or unwilling to address it in a really robust manner."

Kotlovitz lauded the work of groups such as READI -- or Rapid Employment and Development Initiative -- Chicago, which makes available "violence interrupters" who jump into simmering conflicts in an attempt to de-escalate them before they erupt into bloodshed. The group also provides trauma counseling.

"Finally there's a recognition that so many people living in these communities are dealing with personal collective trauma, and so, for example, this one program, through these algorithms, they found these young men most likely to be shot or to shoot someone," said Kotlovitz, who co-produced "The Interrupters," a documentary about conflict mediation workers who risk their lives on the streets.

"They not only provide them jobs, which is a way of kind of, again, rebuilding community, but they're also providing cognitive behavioral therapy for them. A lot of people in these distressed communities are incredibly angry and I understand it. They're angry, one, at their circumstance because of race and class, but they're also angry because they've lost a loved one, they're grieving and they don't know what to do with it all."

Still, residents of the toughest neighborhoods in Chicago and other US cities have not given up hope and thrown their hands up in the air.

"It undoubtedly shapes their lives and they do everything they can not to let it define them," Kotlowitz said of the bloodshed.

"But the people I met, the thing I admired about them is that they were all kind of standing erect and moving on, and some of them moving on heroically, doing this extraordinary work in part because they themselves have been touched by the violence."

Rafael Mangual, a senior fellow and head of research for the Policing and Public Safety Initiative at the Manhattan Institute think tank, said the declining number of police officers on the streets is an obstacle to combating rising homicides and shootings in America.

"One of the things that just doesn't get talked about enough is that even pre-2020 there was a huge recruitment and retention problem going on in police departments around the country, particularly in urban police departments," he said.

Some police departments have raised the alarm on current and future staffing levels, citing Covid-19, the great resignation, low pay, the climate for law enforcement, and local reform efforts that are making recruitment and retention difficult.

"We need to figure out how to attract and retain good police officers in places with significant crime problems," Mangual said. "I also think we need to understand that the nature of the recruitment and retention crisis has also really impacted the senior ranks in a particular way -- which I think resulted in significant brain drain within police departments."

A national survey from June 2021 found that departments around the country on average were filling 93% of budgeted positions available, according to the Police Executive Research Forum.

"What's happened is that you're seeing people who are eligible for retirement staying on the job for less amount of time beyond that point of eligibility," Mangual said. "What that means is that those officers who are going to have many more years of experience and who are going to tend to be in different types of roles -- say like investigators, detectives -- they are the ones that are leaving at higher rates, which means that even if you back fill those positions, you're back filling them with less experienced officers."

Thomas Abt, Council on Criminal Justice

Thomas Abt, a gun violence expert and senior fellow at the Council on Criminal Justice, said that even as homicides continue to rise in major US cities local governments can take steps to reduce violence that don't require legislation or huge budgets.

"That's where the hopefulness is, which is there are solutions at the micro level that cities can take right now," said Abt, chair of the council's Violent Crime Working Group, which in January announced a series of immediate steps to stem gun violence. "They're hyper focused. They're focused on the highest risk people and the highest risk places. The people who are most likely to pick up a gun and use it in the places where that's most likely to happen. Some of those solutions involve law enforcement and some of them involve treatment services and community based outreach."

The group recommends that cities conduct robust reviews of shooting and incident reports and intelligence gathering by law enforcement to identify "hot spots" with the most violence.

It also calls for a mix of outreach work in communities and hospitals to defuse conflicts with what experts call proactive policing efforts such as "gang takedowns" that studies show contributed to a decline in gun violence in New York City public housing complexes in recent years.

The single largest impediment to reducing gun violence right now is partisan politics, according to Abt.

Daniel Webster, co-director of the Johns Hopkins Center for Gun Violence Solutions, agrees that community violence intervention is a complement, not a substitute, to good policing.

"Their capacity is not near what you would want to really address this problem," he said of the community-based programs. "They largely have been funded ... as demonstration projects like, oh, we got some little extra cash from this grant or that grant, let's put a program here or there and call it a day."

And in communities where guns are so readily available, Webster said, it's hard to fathom a response that doesn't involve armed law enforcement.

Webster also agreed with the Council on Criminal Justice's call for providing better training and education as well as adequate salaries and benefits to community anti-violence workers.

"We tend to talk about accountability only on the side of law enforcement," he said. "I think the same set of professional standards should apply to the community work as well... Give them the same kind of benefits that you give law enforcement. They're putting their lives on the line. Right now we've tried to do everything on the cheap. And they're effectively miracle workers."

In Baltimore, three community violence interrupters have been shot and killed since last year, according to Webster. In his state of the city address in April, Baltimore Mayor Brandon Scott remembered the three "Safe Streets" outreach workers -- Dante Barksdale, Kenyell Wilson, and Da'Shawn McGrier -- along with the first responders and public safety workers who lost their lives in the line of duty.

"Our Safe Streets workers put their lives on the line day in and day out because they believe in a better future for our city -- a future we all should believe in," Scott said in a statement after McGrier was fatally shot in January, CNN affiliate WBAL-TV reported.

"They do a very dangerous job," Webster said of the violence interrupters. "They do it without guns or bulletproof vests... What we're ultimately trying to do is change culture and change some of the norms. And part of the way you get there is that you give honor to peace builders, you give honor to people who are showing you don't have to respond to every provocation with a gun."