The Italian place where you don't eat 'Italian' food 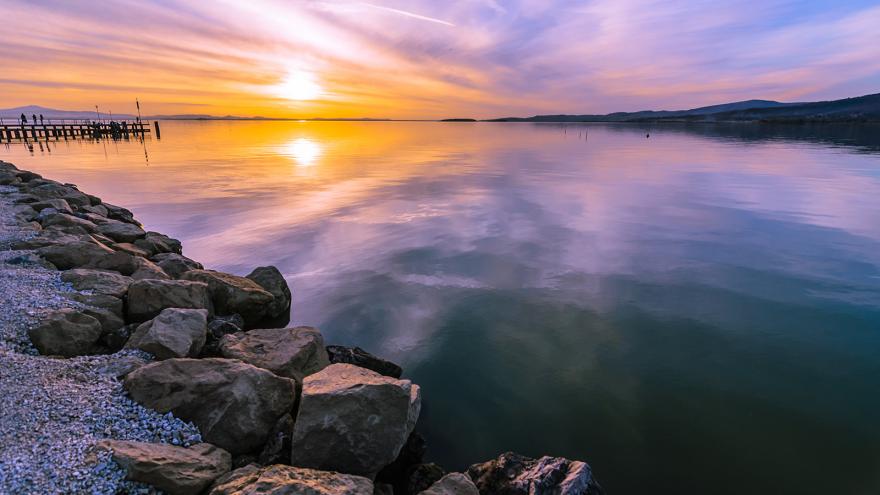 (CNN) -- Everyone who travels to Italy knows the drill. A day of culture and maybe a little shopping, followed by aperitivo and piles of pasta for dinner. Or, possibly a pizza -- or even risotto. Because that's what they eat in Italy, right?

The people of Lake Trasimeno would beg to differ.

The nearly 50 square mile lake -- wedged into the central Italian countryside, in the region of Umbria but nudging up against Tuscany -- is known for its traditional dishes which differ wildly from its neighbors.

Umbria is the only landlocked region on the Italian peninsula -- and it's known for its hearty, meat-heavy food that comes straight from the forested hills: truffles, prosciutto and sausages are among its most famous exports.

And yet here on the lake, the traditional foods eschew pasta and pizza in favor of fish. Not your everyday fish, though -- instead of fancy cuts of tuna or sea bass you'll find perch, pike and eel.

They're often cooked in an unusual way, too. Take carpa regina in porchetta, one of the lake's signature dishes. "Carp baked like porchetta" (herb-roasted pork) takes one of the lake's biggest fishes, slathers it in strong herbs, and roasts it -- just as is done with Italy's classic meat, porchetta.

"I come to Trasimeno for the food -- because it's like nowhere else in Italy," says Veronica Grechi, a B&B owner from Florence, and regular visitor to the lake.

Visitors might get a shock but the reason that these Italians don't eat "like Italians" in our collective imagination is that Italian cuisine is hyper-local -- usually varying by town.

Lake Trasimeno's food, which can at first seem incongruous to foreign tourists, is actually what Italians call "zero kilometer" food -- in other words, as local as it gets. Not only that, but there's a reason some of the dishes can seem strange. And there's a reason why they almost disappeared, too.

The 'Rimini of Umbria'

Today, Lake Trasimeno is a peaceful place, square in the middle of the country, far from the madding crowds of Italy's beach resorts.

But 50 years ago, says professor Daniele Parbuono, an anthropologist at the nearby University of Perugia, things looked very different.

The area was important during the Second World War -- it was home to a military airport -- and as tourism began to grow in postwar Italy, local politicians saw their chance to redevelop it.

"They wanted to transform it into 'the Rimini of Umbria'," he says -- Rimini being one of Italy's best known beach resorts on the Adriatic coast.

"In the 1960s and 1970s, if you came here you'd have found pine trees, pedalos, changing cabins -- just like Rimini. So much so that you'd have eaten not lake fish but sea fish.

"Today, if you come to Lake Trasimeno you'll eat [the lake's own] fish but it wasn't like this until a few decades ago."

Around 20 years ago, he says, the tourism model changed.

"There's a new knowledge of local resources, of the territory -- we talk about slow food, of food and wine."

That change in the tourism model saved the lake's unique food heritage.

An economy powered by pike

Today, a cooperative of 70 fishermen work on the lake, says Valter Sembolini, vice president of the Cooperativa Pescatori del Trasimeno. It was founded in 1928, but times weren't always so good.

Last year, they opened a restaurant -- La Locanda dei Pescatori del Trasimeno -- where fishermen themselves roll up their sleeves and cook classic dishes of the lake, alongside their partners.

"We wanted to give a [push] to the culinary traditions of Trasimeno," says Sembolini.

"We wanted to take another step towards enhancing them, and to develop economically but sustainably, for us and the area. We couldn't survive just by fishing."

In the first eight months, they've already had 20,000 guests, who've come to eat dishes like pike salad, truffled carp and homemade gnocchi with smoked tench. Of course, they also serve the Trasimeno classic: carpa in porchetta.

For Mariapia Scarpocchi, whose parents opened Da Sauro restaurant 57 years ago -- she now runs it with her children -- carpa in porchetta is one of her signature dishes.

Carpa regina -- Eurasian carp -- is an "enormous fish -- big in all senses, including taste," she says. The biggest she's ever prepared? A whopping 23 kilograms, or over 50 pounds, prepared in porchetta for a wedding.

"It's a medieval dish," she says. "Back then, it was thought that carp was like pork, in its looks and consistency. It's very hard compared to other fish, and kind of bloody. So it's covered in flour, and then has wild fennel added, plus garlic, rosemary, all the same herbs as [the real] porchetta. It's served in chunks. If you ate it with closed eyes, you'd think it's pork."

Scarpocchi and her family also serve modern dishes, but for her, carpa in porchetta is "historic -- it's always been made like that, and we want to keep it going."

Pork-style carp isn't the only incongruous dish on the menu on the lake. In fact, Parbuono -- who was born on the lake -- says that the locals historically cooked fish like meat for a fascinating reason.

"The area around the lake was historically one of contadini [peasants, though not pejorative] and sharecroppers," he says.

The late Perugia anthropologist Alessandro Alimenti described Trasimeno as "an island of water in a sea of land." There were around 10,000 contadini to around 400 fishermen.

The contadini and fishermen lived wildly different lives. The former's days were regulated, living by the hours of the sun and the seasons, while the latter had "no set hours, no conception of time -- they could be going out at 3 a.m. and would be free by 10 a.m."

That led to distrust between the communities.

"The contadini didn't want to have anything to do with the fishermen and vice versa," says Parbuono.

The divide between the two communities living side by side bled into their eating styles. Fish from the lake was sold in Perugia and as far as Rome, even in ancient Roman times. But those who lived lakeside were less interested.

"There wasn't a great habit of eating fish -- the diet was a base of recipes from the earth, contadino food," says Parbuono. "They would eat rabbits, chicken, game, pork, but very little fish."

That's why, when they did eat fish -- perhaps swapping their produce with the fishermen -- they "transformed it into meat," he says.

"They didn't know how to cook fish, so they cooked it as if it was meat. They cooked carp as if it was pork, or roasted rabbit. They cooked perch fillets over a grill." Brustico -- a dish typical of not only Trasimeno, but also two other lakes, Chiusi and Montepulciano, which lie nearby -- is "fish cooked like grilled meat," he says.

In the postwar period as politicians sought to create a landlocked Rimini, lake fish was "neglected," says Parbuono. It was even disappearing in people's houses. "There was that one granny or aunt who made tegamaccio [fish stew] once a year, but it was very, very rare," he says.

He remembers one restaurant in Chiusi, over the border in Tuscany, that served brustico and tegamaccio, and one place in Castiglione del Lago. But then, slowly, it returned to the menus.

A more conscious, sustainable tourism helped, he said -- as did an Italy-wide focus on promoting hyper-local products.

Today, Trasimeno is known not just for its food but its "fagiolina:" a small bean, grown by the Etruscans in pre-Roman times. The fagiolina has been awarded a Slow Food "presidio" -- or badge of protection, awarded to products from an area that are endangered.

But as Parbuono was growing up, the beans were far from prized.

"A bean costs something like a gold nugget today, but my nonna gave them to the rabbits," he says.

"When I suggested eating them, she told me, 'You eat them -- I'm giving them to the rabbits.'"

"There wasn't this idea of sustainability in the 1980s," he adds.

"Then there was political work done on [prizing] ingredients from their area, and it [Trasimeno and Umbria] recharacterized itself."

He compares it to the highly prized saffron of Città della Pieve, about 15 minutes south of the lake: "They were forgotten products, rediscovered in the 1990s."

Today, Lake Trasimeno has a tourism model that's very different from Italy's main resorts. Instead of quantity, the area goes for quality. Two of the lakeside towns -- Passignano sul Trasimeno, on the north coast, and Castiglione del Lago, on the west -- belong to the Borghi piu' belli d'Italia listings of spectacular small towns. They're joined on that list by three other towns, just off the lake: Corciano, Paciano and Panicale.

The idea is to offer a slower kind of tourism, that attracts a different, more thoughtful kind of tourist -- someone who's more likely to appreciate the food, or attend the Trasimeno Music Festival, held every July.

Angela Hewitt is one of them. A Canadian concert pianist based in London, she's the festival's artistic director, but bought a lakeside piece of land to build her dream retreat in 2002. "I can honestly say that I never tire of my view, and when I arrive there after my endless touring around the world, I can't quite believe my luck," she says.

"The lake sets the stage for breathtaking sunsets that open your heart and soul, especially in the autumn and winter months. Even in high season, the area is still peaceful and not too touristy, with marshes bordering much of the lake."

For Hewitt, the dishes here "emphasize the taste of the ingredients without adding a lot of rich sauces." She forages wild fennel and wild asparagus on the hill on which she lives, and cultivates olive trees, pomegranates, lemons, cherries and -- that staple of carpa in porchetta -- rosemary.

Her favorite dish is another lake fish cooked like meat -- skewers of perch, grilled just like meat. And although she's not an eel fan, she loves torciglione -- the holiday cake made from almonds and pine nuts that's made in the region around Christmas and New Year. Some say it's an eel; others that it's a snake, recalling the Etruscans who lived on the lake 2,500 years ago, and were said to have worshiped snakes.

Scarpocchi, whose restaurant dandles on the shore of Isola Maggiore, an island hovering off the north shore of the lake, says that these traditional dishes are the locals' history. She also specializes in tegamaccio, a fish stew that was once made of leftovers that fishermen couldn't sell, and cooked in a sauce an earthenware pot. She makes it with perch and eel, scorching the eel first, and adding lemon, to make it lighter.

She says that although some lakeside restaurants do serve sea fish, most tourists are excited to let themselves be guided by her staff towards something more local (they only serve local produce alongside their lake fish).

At Da Sauro, they pair tagliolini pasta with smoked tench, and do their own lakeside version of seafood pasta -- all supplied by the cooperative. Not that it's all traditional -- they also do fish and chips, using perch.

"Italy is rich in lakes, and the quality of fish is high -- the ingredients are local but they're fully Italian products," she says of her cooking.

For Parbuono, the refocusing on the lake's traditions has saved them, taking the number of fishermen from a handful left 20 years ago to the thriving cooperative today.

Eating the lake's oh-so-particular food allows you to understand the place better, he says.

"If you eat eel at home, it's an eel; on the lake, you see a cultural dimension.

"We anthropologists differentiate between nutrition and diet -- nutrition is biological but diet is cultural.

"Sitting with a view of the lake at sunset, eating that eel, as the chef explains how it was made, and brings a good white while from Trasimeno -- you're not just eating the eel.

"You're consuming the lake."