The man who wrestled a gun from California shooting suspect at Alhambra dance hall thought he was going to die: 'This was it,' he said 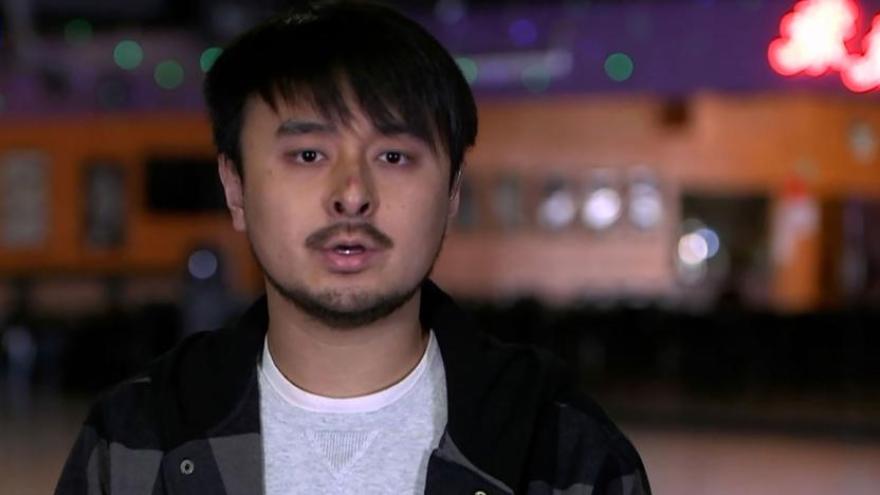 (CNN) -- It was late in the evening Saturday when Brandon Tsay heard the "distinct sound of metal" in the lobby of Lai Lai Ballroom & Studio, a dance hall in Alhambra, California, he told CNN's Anderson Cooper Monday evening.

Tsay, whose family had owned the business for three generations, was working the ticket office when someone entered, and he knew quickly the silent and stoic man was trouble.

The man, who appeared to be scouting the room, then pointed a firearm at him, Tsay said.

Tsay froze as he saw the armed man -- who authorities say had just opened fire at a Lunar New Year celebration at another dance studio in nearby Monterey Park, killing 11 people and injuring 10 others.

"I'm going to die. This is it. This is the end for me," Tsay recalled thinking at that moment. "But then something happened. Something came over me."

He lunged towards Tran and struggled with him for about 40 seconds, but he said it felt like "way longer." Tran hit him several times on his face, the back of his head and on his back and hands, Tsay said.

"I was trying to divert the weapon away from me and the ballroom, down on the ground in case he did fire," he said.

In those seconds, as his life was on the line, Tsay thought to himself, "If I let go of this gun, what would happen to me, the people around me, my friends, my family?"

Tsay was eventually able to pull the gun away from the gunman -- the first time he ever held a gun -- and told him to leave, he said.

At first, the man looked like he was considering attacking Tsay again, but then left the lobby and jogged back to his van, said Tsay, who earlier shared his account on Good Morning America.

After he left, Tsay immediately called police, still holding the gun in his hands.

Now Tsay is being hailed as a hero for stopping the man authorities say was responsible for devastating a majority Asian community on the eve of Lunar New Year. After opening fire inside the Star Ballroom Dance Studio in Monterey Park, the gunman went to the second dance hall in Alhambra, officials said.

Sheriff Luna initially said there were two people who disarmed the man but on Monday corrected himself and identified Tsay as the lone person responsible.

"He's the hero that disarmed the suspect at the Alhambra location and in my opinion saved many lives," he said. "What a brave man he is."

Tsay's actions likely led authorities to the suspect directly. A law enforcement official with knowledge of the case told CNN that the gun wrestled away from the shooter in Alhambra -- a Cobray M11 9mm semi-automatic weapon designed to take 30-round magazines -- was traced to the suspect, giving authorities his name and description.

The suspect, identified by authorities as Huu Can Tran, was discovered by police late Sunday morning in the city of Torrance, where he fatally shot himself as police approached his vehicle, according to Luna.

Tsay told CNN that people have called him brave for attacking Tran, but said "I feel like that without fear, there cannot be courage." He never expected himself to be the person who would fight in this situation, but when the time came, he just jumped into action, he said.

He knew many of the people attacked at the Star Ballroom Dance Studio in Monterey Park, all of them part of the same close-knit community, Tsay said,

Tsay offered condolences to the families of those who died Saturday. He also said he hopes those injured recover soon.