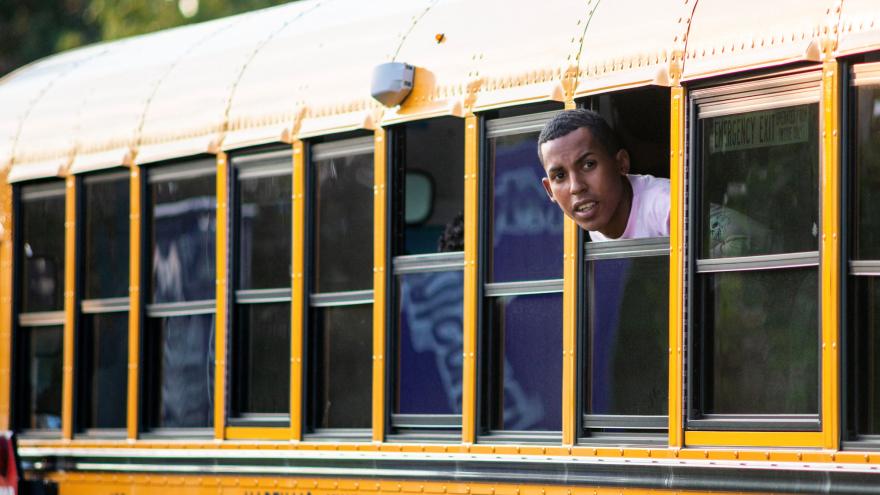 (CNN) -- The roughly 50 migrants who were sent by plane to Martha's Vineyard in Massachusetts by Florida's governor this week were transported to a military base Friday to receive shelter and humanitarian support, officials said.

The migrants, after two days of uncertainty on the small island and a large local effort to provide for them, cheered Friday morning when they were told they'd be taken to Joint Base Cape Cod.

The migrants had been flown from Texas to Martha's Vineyard on Wednesday in arrangements made by Florida Gov. Ron DeSantis -- part of a series of moves by Republican governors to transport migrants to liberal enclaves to protest what they say are inadequate federal efforts on southern border security.

Martha's Vineyard had not been expecting the group, and DeSantis' move was sharply denounced by the White House, migrants' advocates and Democratic officials.

At a church where they had been staying on Martha's Vineyard, migrants cheered Friday morning when they heard the Massachusetts government would shelter them at the Cape Cod military base. They boarded government-arranged buses willingly, officials said, and they arrived at the military installation Friday afternoon.

A volunteer helping the migrants embraced them as they went, and was in tears as they departed.

"This was another person's -- multiple peoples' -- really difficult moment in their life, and they shared it with us with such grace and affection and humor. And to be welcomed into their lives and into their hearts was a gift," Lisa Belcastro said.

A group of civil rights attorneys working with the migrants said their stories are "heartbreaking -- and infuriating." Many of the migrants went to a hospital in need of care upon their arrival to the island on Wednesday.

Some of these migrants were sent to Martha's Vineyard even though they have immigration hearings scheduled that are nowhere near Massachusetts, the group said. Migrants released from government custody often move to other cities in the US as they go through their immigration proceedings.

"This cowardly political stunt has placed our clients in peril," the Lawyers for Civil Rights group said in a news release Friday. "Some now have immigration hearings as early as Monday thousands of miles away."

Some attorneys from the group accompanied the migrants on the buses to theCape Cod base.

The help that awaits the migrants on Cape Cod

Joint Base Cape Cod -- already an emergency shelter designated by the state emergency management agency -- is set up to provide "a safe temporary accommodation appropriate for the needs of families and individuals," the governor's office said in a release.

The migrants "will be housed in dormitory-style spaces at JBCC, with separate spaces accommodating both individuals and families," and families will not be separated, the release reads.

They will have access to services including legal, health care, food, hygiene kits, and crisis counseling, according to Baker's office.

Baker, a Republican, lauded a temporary shelter that the Martha's Vineyard community set up for the migrants in "a moment of urgent need."

"We are grateful to the providers, volunteers and local officials that stepped up on Martha's Vineyard over the past few days to provide immediate services to these individuals," Baker said in a news release.

Flights came from Texas, though Florida governor says he arranged them

Though Florida's governor says he arranged for the flights, the migrants had been in Texas -- not Florida.

For months, DeSantis has been talking about his plans to get Florida involved in redirecting migrants from the southern border in a way that would maximize heartburn for Democratic leaders. And last month, DeSantis telegraphed that Florida might help move migrants from the US-Mexico border -- not from his state.

"We do have money to be able to do (that), but that's from people from the southern border, that's not going in the interior of Florida," DeSantis said at an August press conference.

His administration secured $12 million in the state budget to pay for migrant relocation, and he has repeatedly threatened to use the money to send them to liberal strongholds.

When he laid out his immigration plans at a December news conference, DeSantis teased Martha's Vineyard as a potential destination, saying, "It's somewhat tongue-in-cheek but it is true, if you sent (them) to Delaware or Martha's Vineyard or some of these places, the border would be secure the next day."

The migrants on Wednesday's planes did not know they were being taken to Martha's Vineyard specifically, according to the legal group helping them.

They were induced to board the planes with "representations of work assistance and immigration relief in Boston," the Lawyers for Civil Rights group said in a news release.

"Mid-flight, they were informed they were not going to Boston after all, but to Martha's Vineyard. They were dropped on the island without notice to anyone in the community," the news release reads.

Two of the migrants told CNN that, while they were in San Antonio, they decided to go on the trip after two women and a man approached them on the streets near a migrant resource center.

One of the migrants, Wilmer Villazana, said he was put up in a hotel for five days before the flights and was well taken care of. The women told him they were from Orlando and worked for private organizations that raise funds to help migrants, Villazana said.

One of the women told Villazana and the other migrant, Yang Pablo Mora, that they would get help with shelter and jobs once they arrived at their destination, Villazana and Mora said.

Villazana and Mora did not know the flights were headed to Martha's Vineyard, they said. Villazana thought they were going to Boston, he said.

DeSantis' decision to arrange the migrants' flight to Massachusetts was one of two high-profile transports sent north by southern Republican governors this week. On Thursday, two buses of migrants sent from Texas by Gov. Greg Abbott arrived outside Vice President Kamala Harris' residence in the nation's capital.

The White House on Thursday denounced this week's moves by DeSantis and Abbott. White House Press Secretary Karine Jean-Pierre accused the governors of using migrants as "political pawns" and said their actions amounted to a "cruel, premeditated political stunt."

US Attorney for Massachusetts Rachael Rollins will speak with members of the Department of Justice about DeSantis sending the migrants to Martha's Vineyard, though she did not yet have enough information to say whether he broke any laws in doing so, she told reporters on Thursday.

Despite Wednesday's unannounced arrivals on Martha's Vineyard, some residents of the island worked quickly to provide some key services. The island is known for being a summer haven for the affluent.

"Our island jumped into action putting together 50 beds, giving everyone a good meal, providing a play area for the children, making sure people have the healthcare and support they need," Massachusetts state Rep. Dylan Fernandes, a Democrat who represents the island, wrote on Twitter. "We are a community that comes together to support immigrants."

Hagerty said overall the "outpour was tremendous" and reiterated the island community answered the call to help when migrants arrived without notice earlier this week.

"Sometimes we're alone and unafraid out here, but we understand the path of travel and we understand we're a community that ultimately wants to help people," Hagerty said.