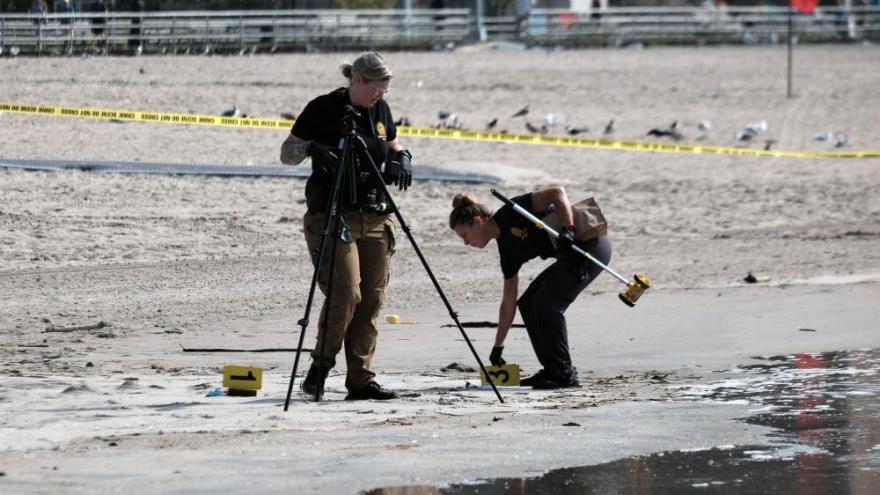 The 30-year-old mother who allegedly drowned her three children off Coney Island in New York City was arraigned September 16 on charges of first-degree murder. Police are pictured here working where the children were found on the shoreline.

(CNN) -- The 30-year-old mother who allegedly drowned her three children off Coney Island in New York City was arraigned Friday morning on charges of first-degree murder, plus three counts each of second-degree murder and three counts of depraved indifference for human life.

Erin Merdy, who appeared virtually for an arraignment in Brooklyn criminal court from her hospital bed at Lutheran Medical Center, was remanded back into custody. She did not enter a plea and is due back in court Tuesday.

Wearing a yellow hospital gown, she sat up on a gurney and leaned to one side, answering only, "Yes," to questions posed early in the session by city Judge Archana Rao. She was flanked by a New York Police Department officer and her attorney, who did not immediately respond to CNN's request for comment.

"The defendant had admitted to her relatives that she had hurt her children," Assistant District Attorney David Ingle said Friday, noting Merdy had custody of the three.

Merdy was hospitalized for psychological evaluation after police found her "soaking wet" and questioned her Monday morning in Brighton Beach, next to Coney Island, a law enforcement official said.

Earlier that morning, she'd been seen walking with all three of her children -- a 7-year-old boy, a 4-year-old girl and a 3-and-a-half-month-old girl -- on the famed Coney Island Boardwalk, Ingle said.

Relatives later called police after Merdy allegedly told them, "The babies are gone," and, "The kids are gone." The mother told detectives she had been "dreaming of walking the kids in the water," a law enforcement official has told CNN.

Ground, air and harbor units searched for the children. Around 4:42 a.m. Monday, officers found them unconscious on the shoreline at West 35th Street.

The children were wet and covered in sand, Ingle said. All three were pronounced dead at a hospital after first responders conducted life-saving measures, including CPR, NYPD Chief of Department Kenneth Corey told reporters Monday.

The children died by drowning early Monday, and their deaths are considered homicides, the New York City Office of the Chief Medical Examiner said.