The mysterious silver monolith in the Utah desert has disappeared 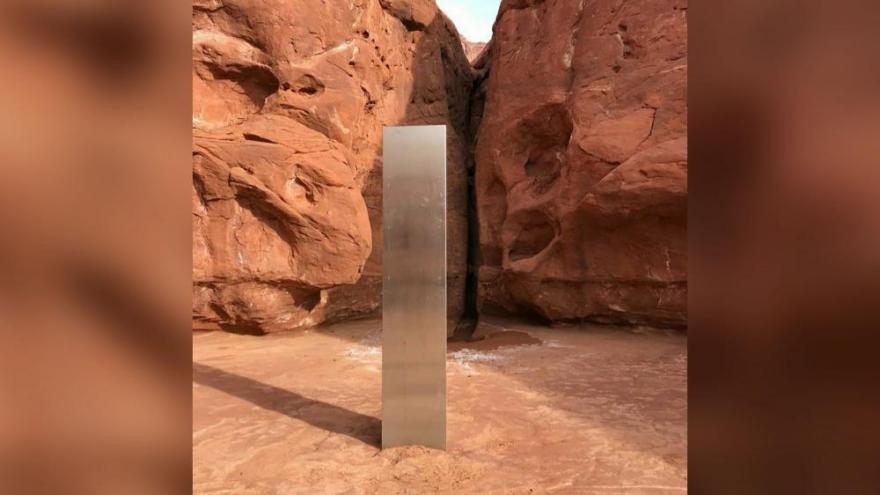 (CNN) -- A tall, silver, shining metal monolith discovered in the desert in southeastern Utah -- which prompted theories of alien placement and drew determined hikers to its secret location -- has now disappeared, the state's Bureau of Land Management said Saturday.

The monolith was removed by an "unknown party" sometime Friday night, the agency said in a Facebook post.

"We have received credible reports that the illegally installed structure, referred to as the 'monolith,' has been removed" from BLM public lands, the post said.

"The BLM did not remove the structure, which is considered private property."

The monolith was first discovered November 18 by officers from the Utah Department of Public Safety's Aero Bureau.

They were flying by helicopter, helping the Division of Wildlife Resources count bighorn sheep in southeastern Utah, when they spotted something that seemed right out of "2001: A Space Odyssey."

"One of the biologists ... spotted it, and we just happened to fly directly over the top of it," pilot Bret Hutchings told CNN affiliate KSL. "He was like, 'Whoa, whoa, whoa, turn around, turn around!' And I was like, 'What.' And he's like, 'There's this thing back there -- we've got to go look at it!'"

And there it was -- in the middle of the red rock was a shiny, silver metal monolith sticking out of the ground. Hutchings guessed it was "between 10 and 12 feet high." It didn't look like it was randomly dropped to the ground, he told KSL, but rather it looked like it had been planted.

"I'm assuming it's some new wave artist or something or, you know, somebody that was a big ("2001: A Space Odyssey") fan," he said, referencing a scene in the 1968 film where a black monolith appears.

Still, it is illegal to install structures or art without authorization on public lands "no matter what planet you're from," said Utah DPS in a statement released Monday.

The location of the monolith was not disclosed because authorities said they didn't want curiosity seekers to become stranded in the remote landscape and need to be rescued.

But of course, that didn't stop some. Several people already successfully located the monolith, tucked in a redrock slot canyon south of Moab.

The trek involved driving in the darkness over rocky terrain and verifying GPS coordinates, according to three people who went to see it. At least one explorer got lost at first. But the trip was worth it, they said, even if the monolith wasn't the work of aliens.

David Surber may have been among the very first to view the monolith in person. The coordinates to the monolith were circulating on Reddit, but none of the users could confirm they were correct. Surber volunteered to find out.

The coordinates were indeed correct, and Surber eagerly shared the results of his visit with 200 Reddit users who'd flooded his inbox. Among his findings: The monolith wasn't magnetic or solid (he said it sounded "like a cardboard box" when he knocked on it). He also shared step-by-step instructions for the drive out to the monolith.

"At the end of the day, extraterrestrial or made through artistic expression; the monolith provided an opportunity for thousands of people to rally behind something positive again," he told CNN in an email. "It was a good escape from all the negativity we've experienced in 2020."