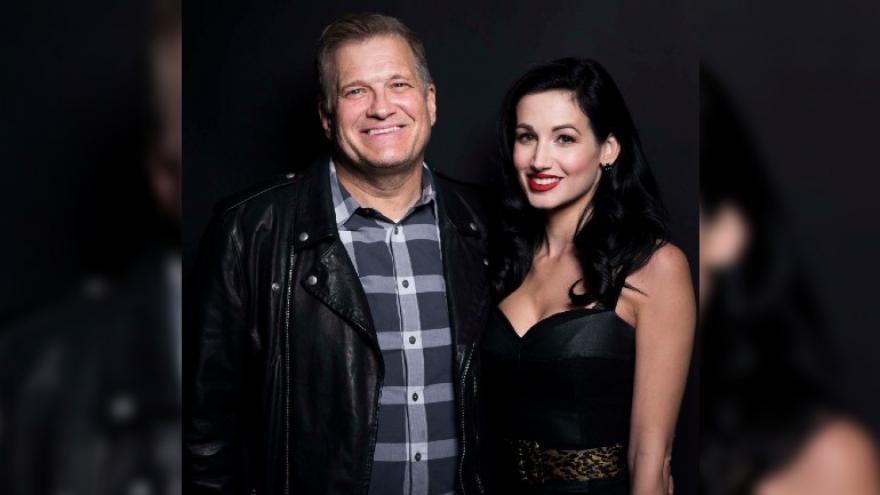 (CNN) -- Comedian Drew Carey is mourning the death of his ex-fiancée Amie Harwick, writing in a social media post that he was "lucky" that she was a part of his life.

"The Price Is Right" host tweeted on Monday what appeared to be a holiday image of him and Harwick sitting on a throne next to a Christmas tree with animated polar bears surrounding them.

"I hope you're lucky enough to have someone in your life that loves as much as she did," Carey wrote in the tweet.

Harwick, 38, was found unresponsive and "gravely injured" beneath a third-story balcony at her home early Saturday morning, according to a statement from the Los Angeles Police Department.

The LAPD said officers were responding to reports of a "woman screaming" in the Hollywood Hills neighborhood where Harwick lived when they found her.

Police said her injuries were consistent with a fall and she was transported to a local hospital where she died. Officers found possible evidence of a struggle in Harwick's home as well as forced entry, the LAPD said.

Harwick's ex-boyfriend, Gareth Pursehouse, 41, was arrested Saturday afternoon in connection with the case and is being held on a $2 million bail, according to jail records.

Police said Harwick had recently expressed fear for her safety due to a former boyfriend and had previously filed a restraining order against him.

Harwick was a well-known therapist in West Hollywood, specializing in family and sex counseling. She regularly appeared on podcasts, TV and her YouTube channel to discuss her work.

Carey, 61, was engaged to Harwick in 2018, but the couple broke up less than a year later.

"Amie and I had a love that people are lucky to have once in a lifetime," Carey said in a statement to CNN. "She was positive force in the world, a tireless and unapologetic champion for women, and passionate about her work as a therapist. I am overcome with grief. I would like to thank you in advance for giving myself and everyone who loved Amie privacy while we try to work through this tragic situation."

Vulture reported that "The Price Is Right" has postponed taping for the week in the wake of Harwick's death.