The world's largest bobblehead unveiled at a bargain store in Pennsylvania 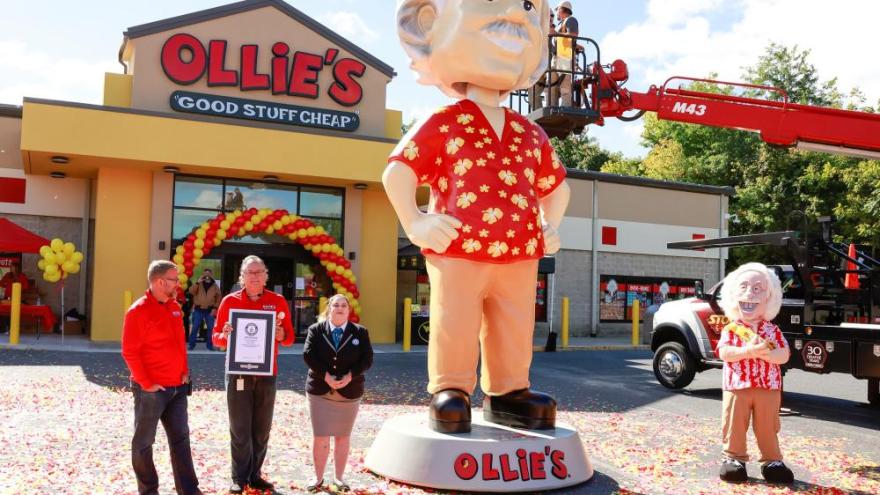 Bargain retailer Ollie’s says it broke a world record with a 16.5 foot tall, 600-pound bobblehead replica of their mascot.

(CNN) -- Bargain retailer Ollie's says it broke a world record on Wednesday -- with a 16.5 foot tall, 600-pound bobblehead replica of their mascot.

The massive, fully-functioning bobblehead depicts Ollie, the company's mustachioed mascot. The company unveiled the huge statue as part of their 40th birthday celebration, according to a news release.

A representative from Guinness World Records was present to certify the bobblehead's impressive size, although the company hasn't yet confirmed the record on its website. Guinness did not reply to a request for comment.

The bobblehead record was previously held by Applied Underwriters, who created a 15-foot replica of their St. Bernard mascot in 2016.

Guinness's guidelines stipulate that the bobblehead must be fully functioning and must be a replica of an existing item -- like the smaller Ollie bobblehead that Ollie's already sold.

Crafting the huge Ollie bobblehead took four months, according to the news release. Foam was hand-sculpted to perfectly mimic the smaller Ollie. Over 10.5 gallons of paint were used, and the sculpture weighs over 600 pounds, the news release says.

The bobblehead was revealed at the company's flagship store in Harrisburg, Pennsylvania.

"For 40 years, we've been committed to offering huge deals on brand name merchandise, so we wanted to create something big to help honor our anniversary, and what better than a 16-foot bobblehead?" John Swygert, Ollie's president and CEO, said in the release.