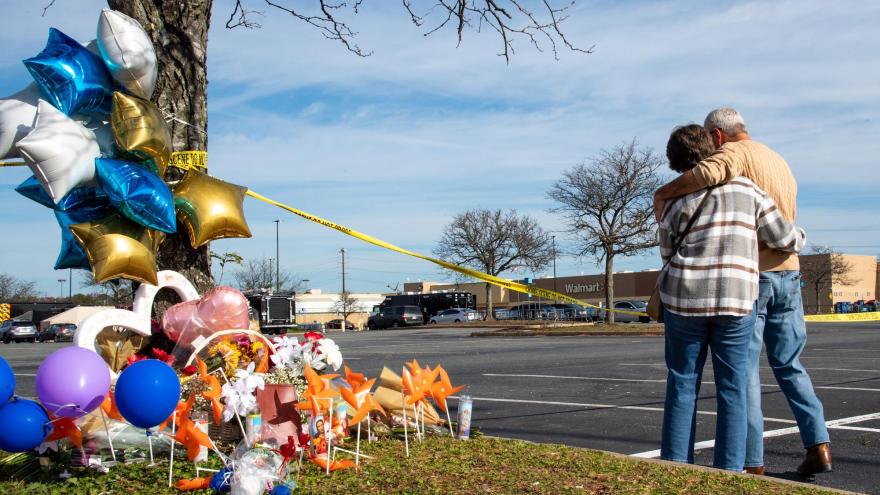 Chet Barnett, right, and his wife, Debbie, hug and stand in a moment of silence in the parking lot of Walmart in Chesapeake, Virginia, on November 24.

(CNN) -- The youngest victim in this week's mass shooting inside a Walmart in Chesapeake, Virginia, is a 16-year-old employee who reportedly used his first paycheck to buy his mother a gift before he was killed two days ahead of Thanksgiving.

Fernando Chavez-Barron, along with five other coworkers, was shot and killed Tuesday night when a manager opened fire in an employee break room during a meeting before killing himself, according to a social media post from the city of Chesapeake that publicly identified the teen on Friday.

As authorities work to learn more about the gunman, including publicly releasing a note found on his phone after the shooting, friends of the 16-year-old killed are in mourning.

Those who knew Fernando told CNN affiliate WTKR that he had just started working at Walmart and used his first paycheck to purchase a gift for his mother.

"I'm out of words, and speechless that it was him," Trejo-Alvarado told WTKR. "I was hoping everything was a dream until today. I wish he was still standing here with me. I prayed yesterday night with my whole family for him. We got flowers and candles at home for him, too."

Trejo-Alvarado texted and called Fernando but didn't receive a response, he said. Later, he called his friend's brother, who told him Fernando didn't survive, WTKR reported.

"He would always be outgoing with anybody he met. He was nice," Trejo-Alvarado said.

Five others at the Walmart were killed, including Randy Blevins, 70, Lorenzo Gamble, 43, Tyneka Johnson, 22, Brian Pendleton, 38, and Kellie Pyle, 52.

On Thanksgiving Day, the community gathered at a growing makeshift memorial outside the store to pay respects for the lives lost in yet another mass shooting that turned a staple of daily life into a gruesome crime scene. Two people were still hospitalized, with one in critical condition, the city said Thursday.

In honor of the victims, Chesapeake city officials are planning a vigil Monday at 6 p.m. in City Park.

Also on Monday, city council leaders will hold a special meeting confirming an emergency declaration that "will free up funding to support recovery" after the shooting, according to the city's Twitter account Friday. The post did not specify how the funding would be used.

Since the shooting, authorities have been trying to determine a motive for the sudden eruption of gunfire in a workplace two days before Thanksgiving. Officials on Friday released details of writings from the shooter's phone obtained after the tragedy.

The writings -- titled "Death note" -- found on the shooter's phone contained grievances against people in his life, including some coworkers, according to the city's Twitter account Friday.

The note mentions God, the holy spirit and how the author felt he was mocked by his "associates" -- a job title Walmart uses for some of its employees.

"The associates gave me evil twisted grins, mocked me and celebrated my down fall the last day. That's why they suffer the same fate as me," the note says.

"I wish I could have saved everyone from myself," the note continues. "My God forgive me for what I'm going to do."

The city released the note in a series of tweets, redacting the names of those mentioned. None of the victims in the shooting were among the redacted names, police said.

Asked whether the gunman had complained about his colleagues, a statement from Walmart said, "There is nothing that can justify taking innocent lives. Our focus continues to be on the families who are grieving and supporting our associates through this difficult time."

The gun used to carry out the killings is a 9 mm weapon, which the gunman legally purchased the day of the shooting, the city said.

A search of the gunman's home turned up a box of ammunition and "various items in reference to the 9 mm handgun (box, receipt, other paperwork)," the city said in a tweet.

The shooter, who has been identified as 31-year-old Andre Bing, has been described by coworkers as someone who previously displayed odd and threatening behavior.

Shaundrayia Reese, who worked with Bing from 2015 to 2018, described him as a loner.

"He was always saying the government was watching him. He didn't like social media and he kept black tape on his phone camera. Everyone always thought something was wrong with him," Reese said.

Another former coworker, Joshua Johnson, worked at Walmart until 2019 and said Bing had made threats.

"He said if he ever got fired from his job he would retaliate and people would remember who he was," Johnson said.

Reese and Johnson said they didn't report any concerns about Bing's behavior to management.

'It doesn't stop replaying when you leave the scene'

Employees at the Walmart had just clocked in for their overnight shift Tuesday when they saw a manager standing in the doorway, pointing a gun at them in the break room. But the disturbing image hadn't set in for some employees, including Briana Tyler, who had just been hired at the store.

"It still hadn't really kicked in that it was real. Because I was thinking it was like a simulation type of thing, like this is what we do if we have an active shooter," Tyler told CNN. "And the reason why I think it was that was because I recognized his face."

But then reality set in when she saw her colleagues getting shot.

"He just had a blank stare on his face and he just literally just looked around the room and just shot and there were people just dropping to the floor," Tyler said. "Everybody was screaming, gasping. He just walked away after that and just continued throughout the store and just kept shooting."

As the shooter walked away from the break room, employee Jessie Wilczewski hid under a table, she told CNN. She described seeing some of her coworkers on the floor or lying on chairs -- some likely dead.

When the shooter returned to the break room, he told her to get out from under the table, Wilczewski said.

As she got up and started to leave, she tried not to look at her coworkers -- but the sound of blood hitting the floor haunts her, she said.

"The sound of the droplets, da-da-da-da, it replays and replays and replays," she told CNN earlier this week. "Of how much blood was coming off the different chairs -- it was making a rhythm. And it was one of the most disturbing things -- I will, I think, will never let go of that."

Wilczewski said the trauma she witnessed stuck with her after fleeing.

"Never, ever in my life would I ever wish this upon anybody," Wilczewski said. "And it's horrible because it doesn't stop. It doesn't stop replaying when you leave the scene. It doesn't stop hurting as much. It doesn't stop, and it sucks because you really want it to. You just want that little bit of -- that you had before all this."